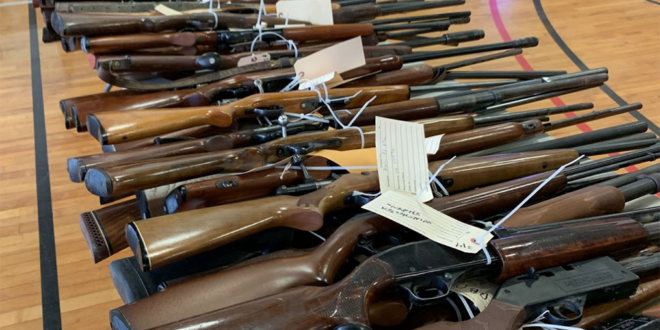 After collecting nearly 350 firearms at a Syracuse gun buyback, state and local officials were quick to call the event a success — but researchers are not as convinced.

The event was held at St. Lucy’s Church’s food pantry on Gifford Street July 24. When the final results were calculated, Jon Wood, who works for the Attorney General’s Office, said 342 firearms, including 11 assault rifles, were collected.

Wood said they paid out over $30,000. Sometime between noon and 1 p.m., event organizers ran out of gift cards, Wood said, noting the event began at 10 a.m.

“We ran out of money,” said Ed Thompson, the Assistant Attorney General In-Charge. “We had to go back [to local stores] and get more gift cards, which is a good problem to have.”

Sgt. Matthew Malinowski of the Syracuse Police Department evaluated the effectiveness of the event.

“If you only look at its impact on violent crimes immediately, you may not see a direct impact,” Malinowski said. “But the thing is we cannot state what these guns would have committed.”

While officials exuded positivity following the event, researchers may not share that sentiment.

A 2013 study by the International Journal of Police Science & Management, conducted by three criminal justice professors at SUNY Buffalo, found that gun buyback programs have been “ineffective” throughout their history. The study revealed gun buybacks show “a lack of evidence demonstrating effectiveness as a violence reduction strategy.”

Letitia James, the New York State Attorney General, posted about the event on Facebook. “Every gun that was turned in today represents a potential tragedy averted,” she said.

Officials who worked the event echoed her statements.

Thompson said that a lot of people brought in guns that were just hanging around their house. That statement falls in line with the research of multiple studies, which note the types of guns that are turned in during buyback events are often not the ones used during criminal activities.

Wood specifically pointed out the number of assault rifles collected, yet the majority of homicides are committed with handguns, not assault rifles, according to a 2019 study by the National Institute of Justice. Additionally, nearly two-thirds of gun deaths are suicides, according to the Centers for Disease Control.

While over 150 handguns were collected, the types of handguns typically linked to firearm deaths are not the same as the types recovered during buyback events, according to a study published in 2002 regarding 1990’s gun buyback programs in Milwaukee.

Thompson, the AG’s lead assistant, disputes such studies that say these programs do not work.

“A lot of people don’t want these events to be successful,” Thompson said. “If taking one gun off the street saves one person, one family from having to suffer that kind of pain that comes from losing a loved one, then it was worth it.”

Nolan Hughes is a graduate student at the S.I. Newhouse School of Public Communications