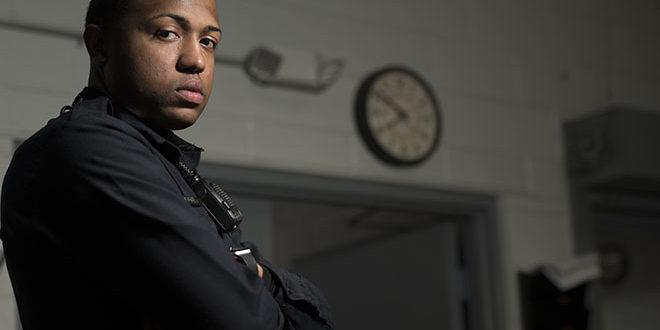 New minority officer preps body and mind to be the person he used to fear: a cop

Brandon Hanks had a hard week. A timid 24-year-old whose eyes always seem to have a faint hint of a smile, Hanks sat in an empty gymnasium — hands clasped tightly together, foot nervously tapping the ground, the shimmer in his eyes now gone — wishing he could fast-forward the day.

“It’s been rough,” he said with a sigh. “We’re getting pepper-sprayed today.”

As a new recruit to the Syracuse Police Department participating in the six-month Police Academy, Hanks was accustomed to rigorous training — to waking up at 5 a.m. every day for endless circuits of push-ups, pull-ups, and wall-sits, to routine five-mile runs that span the entire city, to wrestling that often left him flat-out on the ground. But this week was different. Recruits were scheduled to be pepper-sprayed in the afternoon, and tased later in the week. 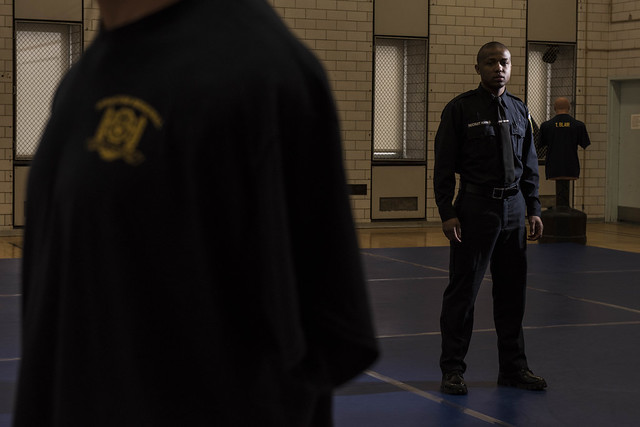 Brandon Hanks, seen last year in the gym of the Police Academy, mentally prepares before his next step as a cadet in training — being pepper-sprayed. | Frankie Prijatel, They Wear Blue Photographer

He imagined what it would be like: The coughing. The loss of breath. The pain. “Just … horrible,” he speculated.

Hanks never imagined that he would be the victim of such torment at the hands of the police. Or rather, he never imagined that it would happen like this: at the hands of his colleagues as he himself sported a navy-blue police uniform and badge. As a young African-American male growing up on the South Side of Syracuse, however, it very easily could have happened under very different circumstances.

Where Hanks grew up, drugs, gangs, fights and shootings were routine. In a predominantly African-American community where more than a third of the population is considered low-income and students have to pass through a metal detector before entering the local high school each morning, Hanks was surrounded by the “roughest and toughest” types of neighborhoods and people.

“To be honest, all of my interactions with police when I was growing up were negative,” Hanks said. “If you had asked me then if I wanted to be a police officer, I would have looked at you like you were crazy.”

Like many of the kids around him, Hanks developed an aversion to law enforcement at an early age. It was socially acceptable, even encouraged to hate the police, to distrust the very people who were tasked with protecting the community. But unlike many of his peers, Hanks resolved to create a path for himself that would allow him to defy the expectations that were placed on him and so many young South Side teens. 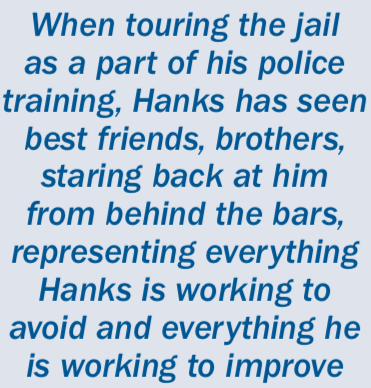 He knew that he was lucky: he had good parents who weren’t in jail, a loving family that had what he described as the “strength” to stay together. After graduating from Henninger High School, he decided to take advantage of his privileges and go to college.

It was during his sophomore year at SUNY Morrisville State College that Hanks began to question his previous notions of law enforcement, and his power to bridge the gap between reality and misconception, policing and community engagement.

Hanks spent his first two years of college as a general studies major, taking basic courses while he figured out what career path he wanted to pursue and, of course, playing basketball in his free time.

Hanks balanced a full course-load with a full-time job as a security guard at Upstate Medical University, working the night shift from 11 p.m. to 7 a.m. And every morning, as he began his classes at school, he couldn’t help but feel that he was pushing himself toward a brighter future.

Yet even in this new phase of his life — pursuing an education to avoid a life behind bars that many of his friends seemed to be falling victim to — he couldn’t escape the negative comments about police officers that flew around the basketball court. To Hanks, it was perplexing: He wanted so desperately to contribute to the betterment of his community, but was told that he couldn’t trust the very agency that was tasked with its protection. It inspired him to “take a deeper look to find out what’s really going on.”

He declared a criminal justice major his sophomore year, and his entire perspective changed. He began to see policing as an opportunity — to bring the community together, and to be a role model for children from broken homes who feel that they have no option but to turn to drugs. Hanks grew excited at the thought of becoming an officer/counselor hybrid, a South Side kid who broke the mold but could still play basketball with local kids in the park — even in a police uniform.

“I really see myself interacting with people,” Hanks said. “I want to be the person anyone can come to. I want people to say, ‘Let’s go ask Hanks. And the rest of the department? Those are Hanks’ boys. We can go to them, too.’”

Of course, this wouldn’t be easy. Not the process of becoming a cop — Hanks didn’t worry about that. But what he did fret about could be summed up in a list of three, and they happened to be the three most important aspects of his life: his family, his friends and his peers. He wondered if they would support him or scorn him; embrace him or cast him off as a traitor; feel inspired or feel betrayed. Ultimately, it was all of these.

His parents were thrilled.

“I was excited about it from the first moment he told me. A lot of people look up to Brandon, and if they see him doing good things in the community, maybe he can take some of the badness off of the police,” Hanks’ mom, Ethel Hanks, said. “Maybe he can help people trust them again.”

Some peers, however, were not so enthusiastic. Hanks recalls seeing old friends at the grocery store who refused to make eye contact, and being called a “snitch” by friends who were once considered brothers.

He has struggled to balance his efforts to become a role model for teens in his community while simultaneously being cast off as a sellout by those he feels need him the most.

Still, Hanks maintains that he has made the right decision — for himself, and for his community.

And that’s exactly what keeps him going. 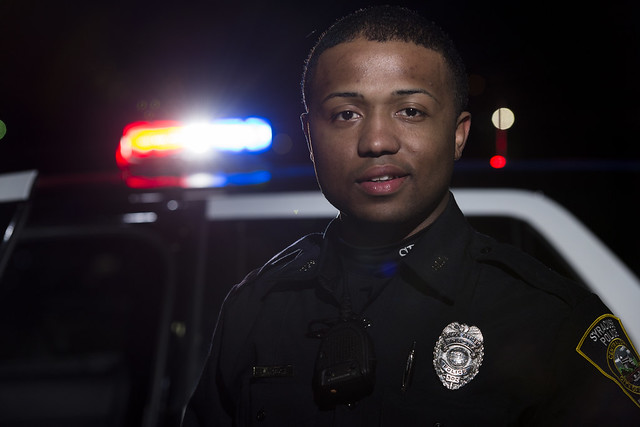 Hanks work hours are typically 2 to 10 p.m. or 3 to 11 p.m. on a rotating schedule, so his days off vary. Because he is still new to the force, he remains on a probationary period until he earns further experience. | Zach Krahmer, Staff Photo

Hanks admits it was rough when he joined the Academy in December 2016 with 35 other new recruits. Eight of Hanks’ fellow recruits had failed or dropped out by spring because of the physical, emotional and academic demands.

He endured hours in the classroom on South State Street learning criminal procedural law, early mornings in the gym practicing defensive tactics and weeks in the field undergoing intensive firearms training. Most significantly, he had inched closer to graduating from the Police Academy on June 5, to next officially join a police force that is 89.5 percent white and only 7.1 percent black, all while African-Americans are six times as likely to be incarcerated as white males.

He often feels that he is crossing over to “the other side,” transcending numbers and statistics that have, at times, felt at odds with his own path. He’s sometimes haunted by what might have been, and at times literally comes face-to-face with the life he has worked so hard to avoid. When touring the jail as a part of his police training, Hanks has seen best friends, brothers, staring back at him from behind the bars, representing everything Hanks is working to avoid and everything he is working to improve.

“Most of me does this for them,” Hanks said. 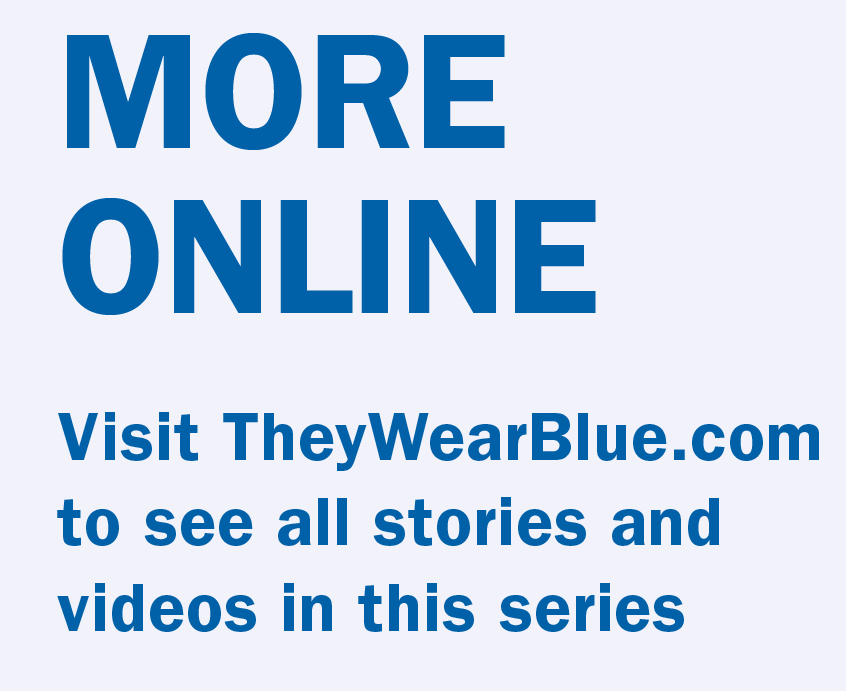 It’s impossible for Hanks to escape his childhood on the South Side: the crime, the broken sidewalks, the constant news of old friends being shot at and stabbed. But Hanks welcomes this enduring embrace, this perpetual anchor that will always return him to the people and place that have made him who he is today.

As he woke up at 5 every morning for routine training runs across the city, Hanks’ feet fell on familiar ground — his stomping grounds, his home, his South Side community — and he was reminded, as residents, friends, and family called out his name and cheered for him when he ran past their homes, of the challenges he has overcome — and the people he will continue fighting for.

“I grew up in this city. I love this city. And I want to stay,” Hanks said. “I don’t want to go anywhere else.”