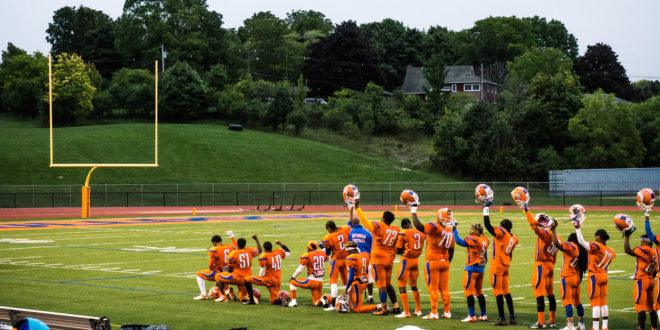 Nottingham football players kneel during the playing of the national anthem at the Sept. 30 home game.

As the sun began to set on the football field behind Nottingham High School, the Friday night lights illuminated the field. The football team lined up along the sideline, facing the American flag next to the scoreboard reading 0-0. As the national anthem began to play, the first four players in line – 6, 51, 40 and 20 – suddenly took a knee. When the last notes were sung by the crowd, the rest of the team raised their helmets to the sky. But they held up their fists.

Statistics like these led prominent NFL football player, Colin Kaepernick, to begin kneeling in protest during the playing of the national anthem before every football game.

When Nottingham High School junior Quentin Lawrence, senior Marcus Derby and junior James Williams noticed what Kaepernick was standing for, they decided to begin kneeling during the national anthem. And like Kaepernick, they received backlash following their actions. However, several community members including Nottingham alumni, fellow high school students and students at other schools in the Syracuse City School District have shown their support.

One particularly negative comment from user Brewer Johnson reads, “The idiot generation……All of them. Dear God I weep for our future.”

Nottingham alumna Annabel Hine Otts says she and a few other Nottingham alumni noticed the negativity in the comments section of the article. This led them to write a letter to the editor at Syracuse.com supporting the students.

“When I saw 16-, 17- and 18-year-old kids doing something to shine a light on these things, I was just so impressed,” Hine Otts said. “I was so depressed by people who said they don’t know what they’re talking about. These problems need those kids and need people to stand up behind them.”

The letter to the editor had 65 signatures. Christina Hollenback, who graduated from Nottingham in 1999, wrote it and connected with other graduates via Facebook in order to gain signatures. After it was published, Hine Otts says there were many graduates, beyond the original 65, who wanted to add their names to the list.

Cjala Surratt, who graduated from Nottingham in 1995 and also signed the letter, reconnected with Hine Otts over their mutual support for the Nottingham football players. She was taken aback by the negative comments on the Syracuse.com article.

In addition to supporting the students’ right to take a knee during the national anthem, she says what they’re doing has helped her open the discourse about racial issues with others in the community.

“What was really beneficial was it gave Annabel and I an opportunity to meet each other in person and talk,” Surratt said. “You know? Like ‘What are your fears, what are your aspirations for your children, how do we have an honest conversation?’”

In addition to the Nottingham alumni, current students from Nottingham have expressed their support for the players as well. Quin’Nayza Camber and Dayjahi Albert, both freshmen, say they go to every football game and support the players.

“I think the people against it don’t really know where the football players are coming from and why they do it,” Albert said. “They don’t really understand what it means to them.”

Support has also come from students at other schools within the SCSD. At Corcoran High School and the Institute of Technology at Syracuse Central, cheerleaders have begun kneeling during the national anthem. One of the Corcoran cheerleaders, senior Na’ndi Edwards, says she was inspired by the Nottingham players.

“I never really paid attention to the movement with Kaepernick,” Edwards shared, “but then I realized what the cause was. If we can’t stand together as a country, why should we stand for the national anthem?”

While there have been negative reactions to the players’ decisions to kneel during the national anthem, there has also been widespread support. Quentin Lawrence, one of the Nottingham football players who has been taking a knee, says he feels supported in his decision.

“It’s really great to see how many people have been saying they support us,” Lawrence said. “It’s just great to know I have people that back me, Marcus, James and everybody else up.”