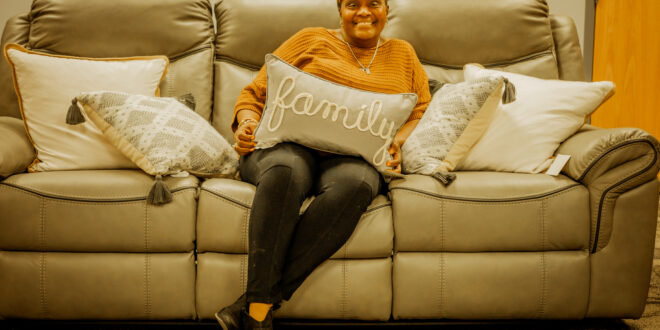 Mary Nelson sits, prepared to welcome the community to her newly renovated South Side center on Nov. 23. | LaTrenda Carswell, The Stand

The Mary Nelson Youth Center received $150,000 from Lowe’s and Boeheim Foundation for upgrades

Whenever Mary Nelson is not at her full-time job at Upstate Medical University, she is sure to be at the Mary Nelson Youth Center to make everyone there stays on task.

“I’m not even sleeping,” Nelson said.

With the help of significant financial contributions, Nelson now has more resources to better serve South Side residents.

The center at 2849 S. Salina St. was one of 100 entries selected from a pool of more than 2,200 to receive a Lowe’s community impact grant. The grand re-opening took place Tuesday, Nov. 23, when the public was welcomed in to see upgrades.

“The biggest takeaway to me is having patience and understanding God’s grace,” Nelson said. “This center has become a beautiful centerpiece for our families and our community.”

The center serves as many things: A drop-off resource center, an after-school program, a food pantry and gathering space.

Nelson recognized that the kids who frequent the center had outgrown the space. With the help of the grant, the building now contains a new game room, commercial-style kitchen and conference room.

The Lowe’s grant was part of its 100 Hometowns project, created in celebration of Lowe’s 100th anniversary this year.

“As an organization, Lowe’s has been very invested in the communities where they’ve been for 100 years,” said Lisa Kovitz of Edelman Inc.

Additionally, the Jim and Juli Boeheim Foundation matched Lowe’s contribution with another $75,000 to renovate the center. The new media and educational rooms will be named after Lowe’s and the Boeheims, respectively.

Nelson was nominated for the Lowe’s funding by Michele Rourke, chairperson for the Syracuse Citywide Neighborhood Watch.

“I was so happy when I found out that she’d won, because it is a center that is very much needed on the South Side of Syracuse,” Rourke said. “It’s really a grassroots organization.”

Rourke volunteers at Nelson’s backpack giveaway every August and has witnessed Nelson’s and the center impact in the community.

“I’ve been in and out of that center so many times, and I have seen firsthand the amount of people that she has helped. It’s not just kids; it’s families,” Rourke said.

Rourke and her husband were working on renovations for their own home when she saw a blurb on the Lowe’s website about the award. She decided to nominate Nelson after speaking with her. Nelson was humbled by the selection.

“Mary’s a very humble person,” Rourke said. “She never likes to bring attention to herself; it’s all about ‘Let’s just help the kids.’”

Through Rourke’s many visits to the center, she saw the challenges Nelson and everyone else working there faced as the building became more populated.

“The kitchen was small, the tiles were cracked, the refrigerator wasn’t big enough … and they’re all on top of each other trying to cook meals and get the kids fed,” Rourke said. “They made it work, but it was difficult.”

The changes will give volunteers more room to operate, as well as make the center a safer environment for everyone.

Former Syracuse Parks Commissioner Ronald “Otis” Jennings is the project manager at the center, serving as the liaison between the center and Lowe’s. He has known Nelson for years and is glad to be on board for this project.

“She trusted me to work with her on this to see it come to fruition,” Jennings said. “I am just very thankful that I was able to have this opportunity.”

Jennings recognized that the building needed a lot of work and helped his team plan accordingly.

“We knew that the center needed a total renovation, from the floors to the walls to the mechanicals, so we took on all of those items,” Jennings said.

The additional contribution from the Boeheim Foundation covered further expenses and expanded the possibilities for the new center.

“If we didn’t have that match, we would not have been able to do as much as we were able to accomplish,” Jennings said. “We were able to go through every room here and renovate, including parts of the basement.”

The changes included a new paint job, vinyl flooring, frontal repairs and removal of all of the overgrowth and ivy attached to the building. These improvements helped the overall appearance and functionality of the center.

Nelson has big plans that she believes are achievable at the new center: To offer a GED program, Narcotics and Alcoholics Anonymous meetings, art classes, homicide/murder support groups, Syracuse Police Athletic/Activities League (PAL) programs and a women’s book club, among others.

“There is always a sense of peace when you walk in the door here,” Nelson said. “It doesn’t feel like a center. This feels like a home.”

Nelson is continuing to work around the clock to make sure everything is good to go. In the midst of preparing to re-open, the annual turkey giveaway was held Nov. 22, the day prior to the center’s grand re-opening.

Nelson wants the community to recognize that the Mary Nelson Youth Center is as much theirs as it is hers.

“I want people to understand this is their home and to take responsibility and ownership of their home,” Nelson said. “If you let things break down, it’s so hard to fix back up. We let things go for so many years; now we’re back up, and it’s beautiful.”