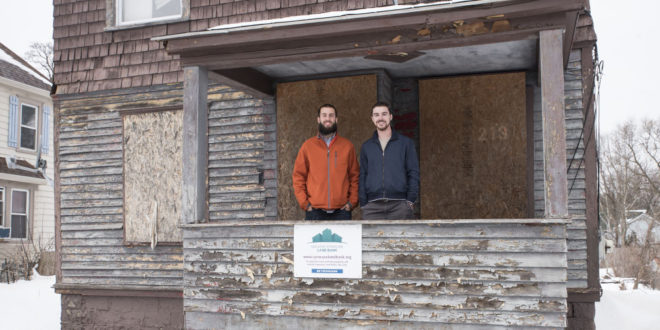 Logan Reidsma, left, and Liam Kirst outside of 213 Clarence Ave., which will be painted by students from Clary Middle School. | Ben Cleeton, Staff Photo

When kids walk by boarded-up homes on their way to school, Liam Kirst and Logan Reidsma want those vacant houses to brighten up the children’s day, rather than remind them of economic realities. 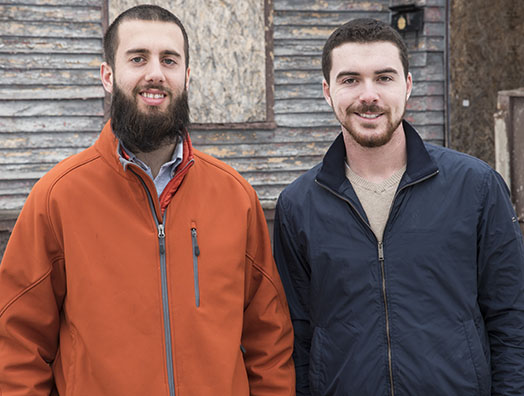 Logan Reidsma, left, and Liam Kirst outside of 213 Clarence Ave., which will be painted by students from Clary Middle School. | Ben Cleeton, Staff Photo

That’s the goal of the Vacant Mural Project, headed by the pair, both community outreach coordinators with the Greater Syracuse Land Bank. They receive brainstorming support from their supervisor, Jake Thorsen, a program manager and neighborhood planner, and Katelyn Wright, the executive director. Kirst and Reidsma are partnering with teachers and community members to replace boarded-up windows with young students’ art on vacant homes around the city.

The Land Bank is a nonprofit working to put vacant, abandoned, underused and tax-delinquent properties to productive use in the local community. The entity is the default recipient of all city tax foreclosures, which creates a misconception among South Side residents who directly associate it with the foreclosure process, Kirst says.

“It almost comes off as if we were the bad guy,” Kirst said. “When there is a foreclosure that gets transferred to the Land Bank, we work with Catholic Charities to try to relocate people. Nobody ends up on the street.”

Many properties obtained by the Land Bank are not demolition candidates but, realistically, aren’t going to be sold right away.

“It’s just an economic reality that people aren’t moving back into the city at a high rate,” Kirst said. “They’re just not.”

Properties must be secured, usually with plywood. The idea, which has been carried out in cities across the country, is for murals to be painted on the plywood — whose cost is already budgeted — and displayed.

Reidsma had the idea to reach out to art teachers in the city’s various schools. The team will work to assign a house close to the residency of their students so youth can look up at their own work when walking by the house.

Kirst and Reidsma, both Syracuse University alums, said they have met with about eight art teachers, and all responded with enthusiasm, adding that the project gives teachers an opportunity to share that art can have an impact on the community and on students. “People can create careers out of it and do it for a living,” Reidsma said.

“One thing that has been pretty consistent among all the art teachers is these kids want to be able to create art that can have some type of real world implication,” Reidsma said.

Plywood boards and paint were dropped off to teachers last month. Classes will have complete creative control as to how they go about the project.

Currently, 20 to 25 houses are being considered for the mural project. But based on the positive feedback, the number may grow. Already, 400 people have shown interest for a community-wide painting day to be hosted on June 3 at the South Presbyterian Church.

Kirst and Reidsma will be a part of the process from start to finish. They will prime and seal each board themselves and will work with another staff member to place and secure the murals to the houses.

The Land Bank project, coupled with other art efforts in the works on the South Side, may create inspiration that has been lacking for years, Reidsma said. Kirst added that the mural project is tapping an energy that has been flowing through the South Side chapter of Tomorrow’s Neighborhoods Today, an organization working to build community and address neighborhood issues.

Reidsma concluded that both would be a spark to create change.