Syracuse Alliance Church welcomes all with open and loving arms

Just three months before Hayward and Nonie DeBose were due to have a baby in 1980, they were looking for a church to serve as a foundation for raising a family. At the recommendation of Nonie’s OB-GYN, an Egyptian man, the two visited the Syracuse Alliance Church at 3112 Midland Ave.

As an interracial couple — Hayward is black and Nonie is white — the DeBoses wanted to raise their son in a multicultural setting. Not only did that mean staying in the city instead of moving to the suburbs, but also
finding a church that welcomed anyone, regardless of race or ethnicity. 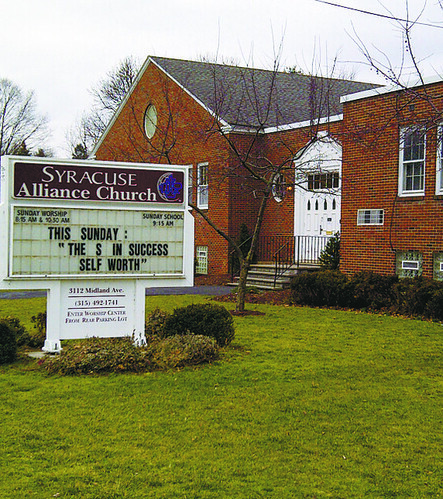 While the Syracuse Alliance Church was made up mostly of whites at the time, Hayward and Nonie felt comfortable there. One couple, Ona and Len Smith, sat in the pew in front of the DeBoses and were particularly instrumental. “She turned around with a big smile,” Hayward said of Ona, “introduced herself and her husband and invited us back.”

“After that, they would look for us on Sundays,” Nonie added.

“That’s why I feel that we stayed here,” Hayward said. “People didn’t judge, they knew that God was about accepting others, making them feel comfortable, making them feel loved. That’s the common denominator for me.”

The DeBoses still attend the church today — this month will mark 32 years — and they hold prominent roles there. Nonie works as an administrative assistant and Hayward is one of several church elders, or elected spiritual leaders. Racial minorities make up roughly half the church’s congregation. 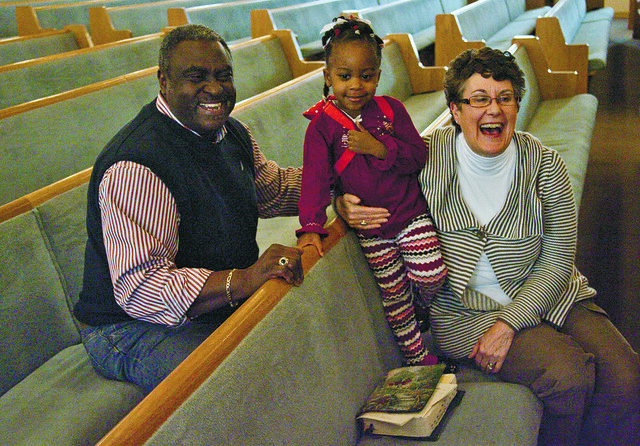 Hayward and Nonie DeBose with their goddaughter, Makaela Volcy, in the sanctuary of Syracuse Alliance Church. - Photo by Marina Zarya

Pastor Tom Brunner, who has been at the church for five years, takes pride in his multiracial congregation: a church with no racial group making up more than 80 percent of its members. Of the church’s average 300 to 350 worshipers each Sunday, Brunner estimates about 50 percent are white, 20 percent are black, 20 percent are Asian, and the remaining 10 percent are other minorities.

According to a study by author and professor Michael Emerson published in 2007, only 8 percent of churches in the United States are multiracial.

On any Sunday, visitors who walk into the church get an immediate sense of the diversity. Two banners hang on the wall behind the stage. One of them reads, “Reaching up to God in prayer & worship,” and the other, “Reaching out to others in evangelism & service.”

One depicts illustrated hands of different colors all reaching together up toward God, and the other shows those same hands reaching down to people of different colors. Before the sermon begins, there is a moment when people greet their neighbors — many races greeting many races. Onstage during any service might be pastor Brunner, who is white, or assistant pastor Ricardo Volcy, who is Haitian.

Brunner calls this multiculturalism “stretching,” growing from being around others who are different. In a recent sermon, he used the analogy of the church as a hand.

“In a multicultural church, it’s like we’re all fingers and we’re all different, and if I lose any of those fingers I don’t grasp the same way,” he said.

For a family like the DeBoses, the church can provide a place of tolerance and equality that is not always assured in their everyday life. Nonie and Hayward have been married since 1970 and said they have experienced some intolerance, like being seated at the back of restaurants that had room in the front. 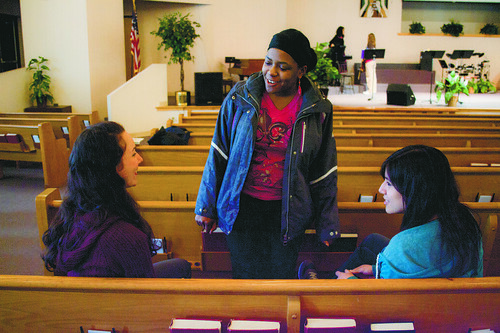 “When we were first going together we’d get on the bus and I’d want to sit up front and he would head for the back,” Nonie said. “Finally, one day I said to him, ‘Why do you always go to the back of the bus?’ He said, ‘Because I had to sit there,’ and that just floored me. It just opened my eyes to what it was like for him growing up down South.”

Nonie said some discrimination still goes on today in the form of racial profiling. Their son has experienced it in recent years while living in the Boston area, she said. “People aren’t aware of it, but that still goes on.” The church, on the other hand, was welcoming from the start.

“We never felt anything but love here,” Hayward said.

Regarding their son, Brett DeBose, Nonie said, “We knew he would be accepted there because we had been accepted.”

Brett, now 31, moved to Massachusetts to attend college and still lives there, for the most part missing out on any firsthand experience of the church becoming more multiracial and multicultural over the years. He said that though he always felt accepted and liked, looking back on it, the church as it was at the time was not supporting him in all of who he was.

“I didn’t experience discrimination in any overt sense,” he said, “but there was something else at work that was more subtle. There was a desire to fit in and be a part of the dominant culture.”

During this time when the church still had a dominant population of whites — the DeBoses described it as being “more like a suburban church in the city” — there were serious discussions by the congregation about actually relocating to the suburbs. “There was a significant core of people who really felt called to stay here, that this is where God wanted us to minister, in this area,” Nonie said. “So obviously we stayed, and people stayed with us when they made that decision.”

Nonie and Hayward credit a variety of small outreach efforts for spreading the word that the church is welcoming to all people. They said the church experienced one of the first major spikes in its black population in the 1990s after a pastor simply made an effort to befriend some people at the local YMCA.

Today, the church opens its doors for open basketball Thursday nights. “It’s where guys in the neighborhood can come and play ball, and just gets them off the streets and gives them a nice safe place to play,” Hayward said.

These have mostly been young black males, and some of them now attend church services.

Nonie leads a support group for mothers in the church called Mom to Mom, which she said also has a racially diverse membership.

Other ways the church reaches out to members of the community include a monthly food pantry, annual clothing giveaways, and community days in the past when church neighbors gave away school supplies. As for worship, the church has Bible study groups that are conducted in several different languages and offers two separate worship services every Sunday. One has traditional hymns; the other features a rock band. Right now these different services may cater to different age groups more than anything, Brunner said, but he hopes that will change.

“We need our worship to be more culturally diverse,” he said. “At this point we’re kind of in the middle where we’re just kind of contemporary worship.” Brett said he supports that the church has embraced cultural diversity more since he’s left.

“I think it’s a wonderful thing,” he said. “I only see that as the community of the church becoming richer. It has a root in the spirit of the community, which has always been inviting of people with open arms.” That spirit was alive, perhaps in a different form, when his parents first started attending more than 30 years ago.

Cliff and Virgie Scott were two of the few blacks attending the church at that time. After moving to the area and trying other churches that weren’t for them, they settled on the Syracuse Alliance Church in 1980, attracted by its inviting nature.

“We came here, and they welcomed us with open arms, and it’s been like a family ever since,” Cliff said.