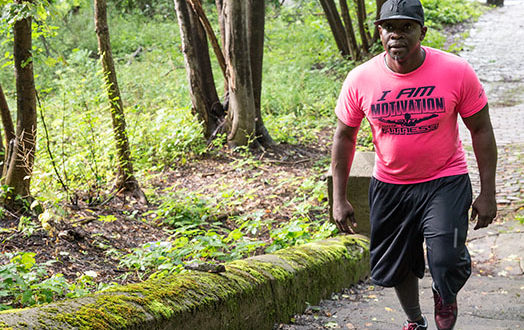 A chance encounter three years ago between two men, who both emigrated from predominantly English-speaking nations in West Africa, changed the life of one and reinforced the life mission of the other.

In 2014, Ronju Benefu immigrated to America from his home in Ghana. He had no money, no place to live, and was constantly moving around with other people from his country. Forty-seven-year-old Yarvon Wright, an immigrant from Liberia who goes by YL, was the first person whom Benefu met in Syracuse. One day, Wright overheard Benefu talking to a friend at the Burger King on South Salina Street.

“He didn’t even know me,” Benefu said during a phone interview. “He heard me talking to somebody and asked the person what is going on with me. He then called and contacted me and left a note with five hundred dollars in it, and I got a room. He came and brought me food, and he checked on me.”

With Wright’s support, Benefu eventually went back to school and earned his degree. He now works with youth development in Atlanta, Georgia, and occasionally visits Syracuse.

This random act of selflessness is Wright’s mantra for living. He said that he grew up in a family that taught him to “treat others from your heart, not from expectation.” When Wright saw Benefu that day, he said he knew he had to help.

Wright, too, has found a way to help himself through hard times. Three years ago, a “terrible divorce” left him depressed and anxious. He had hit rock bottom and turned to fitness as an emotional outlet. He met Kenny Robinson, a fellow gym-goer, who inspired and helped Wright create a new lifestyle. In June 2015, Wright decided to make a career out of helping others: He founded YL Wright Total Fitness. The business is not based in a building, but Wright finds clients through word of mouth and by meeting people.

“Total fitness. Mind, body and soul. This is a new total journey. It’s not about your wife, husband, boyfriend, girlfriend,” Wright said, “because on the outside you could look great, but inside you could be terrible. That’s why it’s called mind, body and fitness to get you where you need to be you.”

Wright’s emphasis on “mind, body and soul” as the complete package of a fitness regimen has not gone unnoticed outside of the gym.

“You should see the people that relate to him,” Benefu said. “He never embarrasses them or judges them. People like that are hard to come by.”

Jessy Martinez, a client of Wright’s since March, met Wright when he offered to help with her posture. She has become his self-proclaimed “poster child.” Martinez said that, with Wright’s help, she lost weight — 36 pounds in all.

“My confidence has gone from being on the floor to sky high,” Martinez said. “Before, I didn’t want anybody looking at me, and I didn’t want to be friends with anybody. My personality has come out more.”

Wright, who says he is a certified trainer, has a consultation with each of his clients. He asks them about their goals and target areas to train accordingly. He does meal plans and meal prepping, and he shares lists with his clients of foods to eat and not to eat. Wright charges $10 per session or a $100 flat fee for 10 weeks.

For him, none of his business is “about the money.” Wright’s main income comes from working as a help desk analyst at DUMAC Business Systems, Inc. He said he would be homeless if personal training was his only job. For him, it’s just another opportunity to help people, even without compensation. 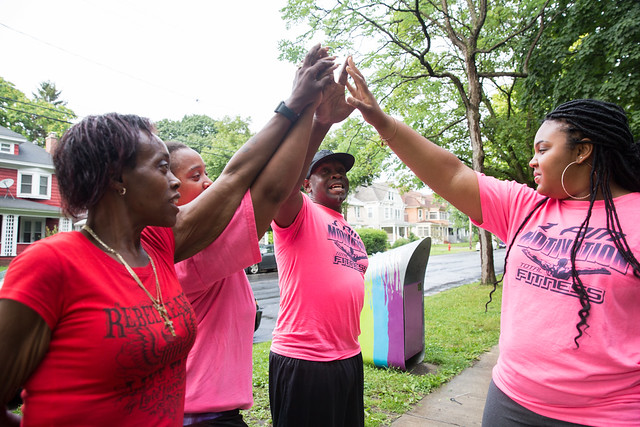 From left, Leslie Davis-Chandler, Fre’keisha Corriders, YL Wright and Adavia Fudge put their hands together as a way to acknowledge their hard work and determination this summer. They had just finished a vigorous workout up and down several steps on Euclid Avenue. | Emily Elconin, Staff Photo

“He helps me, I help him,” Martinez said. “So as people see me, he gets those clients, and then he’s helping me by (my) getting a healthier lifestyle.”

Even assisting a friend or offering some advice has gotten him in trouble in the past, Wright said.

He relates an experience at one gym. “(My client and I) were walking around the track and she’s asking me how many squats to do and then they put a block on (my) membership,” Wright said.

No challenge will stop Wright from helping any of his clients because he hopes that one day he can achieve his lifetime goal: appearing on The Ellen DeGeneres Show.

“I like Ellen because she helps a lot of people,” Wright said.

“Ellen is like an Oprah. All I want is my own building and my own facility and my own space to do what I want.”