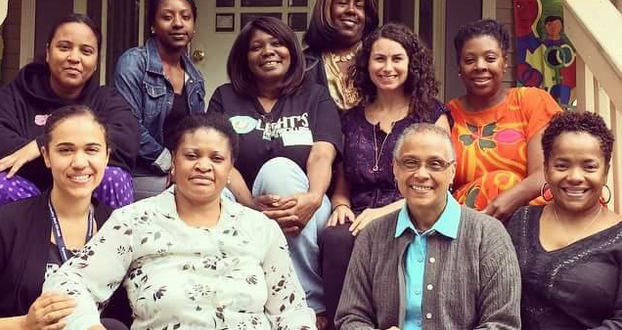 Mothers Are Not Alone

Volunteers support women throughout pregnancy, during birth and beyond

Imagine sitting in a bed in a delivery room all alone. Maybe you don’t speak the same language as your doctors. Maybe you’re 18 years old and scared, giving birth to your first child with no one to support you.

For too many women in Syracuse, this is a reality.

“You don’t realize how intense that day can be until you’re in the middle of it,” said Lisa GreenMills, project director for Syracuse Healthy Start, a program run through the Onondaga Health Department to promote healthy pregnancies and babies. “It can be traumatizing if you don’t have support.” 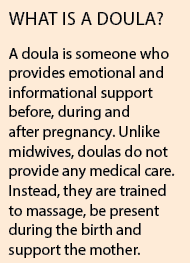 To combat this problem, Syracuse Healthy Start and a service it subcontracts — Resources, Education, Advocacy and Collaboration for Health Central New York, or REACH CNY — launched a new doula initiative about a year and a half ago. A doula is someone who supports and educates a woman during her pregnancy, and the program is making that service available to the community.

The program, which is in its second year of a five-year grant, currently has six doulas and primarily serves women who are already Syracuse Healthy Start clients. It will expand to the entire community next year and will increase the number of doulas to 12.

The doula program started after GreenMills and others she works with at Healthy Start heard stories about women in the area going to the hospital in confusing, stressful and sometimes traumatic situations that they had to handle by themselves. They realized that many women across the city shared these experiences and needed a support system.

The health department spent the first year partnering with Doula Trainings International, a doula training company, securing federal funding and creating its policies. There wasn’t much advertisement because the group was focused on getting the program in order, GreenMills said.

Onondaga County Health Commissioner Indu Gupta described the overall approach. “We are putting an emphasis on how important the health and support is — starting from before a woman gets pregnant, during conception time and after,” she said. 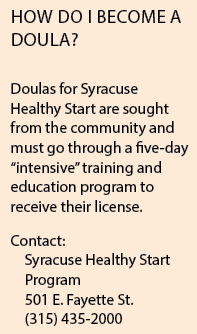 One of the doulas, Barbara Wiggins, explained the training process. Each doula has to go through an “intense” five-day program where they learn about breast-feeding, post-partum depression and how to make labor more comfortable, she said. Despite having raised five children of her own and having helped raise eight grandchildren, Wiggins learned she had been putting her babies to sleep in the wrong position.

“I used to lay my babies on their stomachs,” Wiggins said. “My last two babies I laid them on their side. … I learned that was not the right way.”

Syracuse Healthy Start consortium coordinator Selina Lazarus expanded on the educational aspects. “Education is one of the best ways to help our women and babies in our community,” she said.

GreenMills said the doulas can educate mothers and help reduce infant mortality, much of which is related to unsafe sleep.

“Hearing that message from somebody who’s in your life and you really know makes a huge difference from just your doctor you see once a month or reading it on a billboard,” GreenMills said.

The job of a doula starts before the baby is born. The doula meets with her client and teaches her what to expect during delivery.

During the birth, the doula stays with the mother-to-be the entire time. One of Wiggins’ clients was in labor for 29 hours, and she did not leave. Wiggins is trained to massage the woman to make her feel comfortable and has an exercise ball, which she calls her “doula ball,” that the client can jump on to help the labor along. 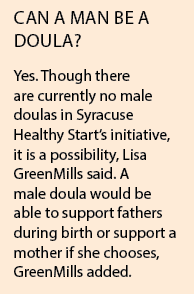 After the baby is born, doulas can help facilitate breast-feeding, and they make visits to the home in the following days and weeks. Sometimes, Wiggins will even do the dishes so her client can take a nap.

Wiggins’ favorite memory of being a doula is getting to cut the umbilical cord for her first client, she said. She regularly gets calls from current and former clients thanking her saying, “I don’t know what I would have done without you,” she said.

Though the doula program is in its infancy, GreenMills says it is on the rise and will rely on word of mouth to spread throughout the community.

“I’m very optimistic about it, just from seeing what is done so far and the sort of thoughtful way it’s been put together,” she said. “I feel like it’s got a really good foundation to be successful.”

— Article by Jon Mettus, Urban Affairs Reporter for The Stand