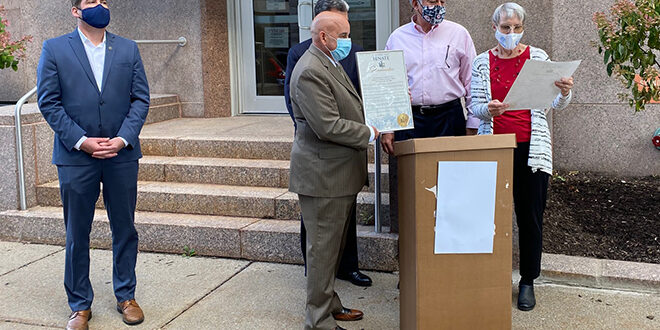 In recognition of National Adult Education and Family Literacy Week a handful of speakers gathered Tuesday in front of the state office building to discuss literacy rates for Onondaga County.

According to Stirpe, 54 percent of our nation’s population cannot read above a sixth-grade reading level. In Onondaga County, the number is 60,000, according to Bill Kriesel, board president of Literacy CNY, which is far lower than the national average but nonetheless far too high.

“It’s not just about teaching someone to read,” Kriesel said. “It’s about changing each individual’s life and making the whole community’s lives better.”

While highlighting Literacy CNY’s contributions to Onondaga County, the speakers also called for increased funding for the program.

According to Kriesel, New York State is Literacy CNY’s greatest funder, but COVID-19 has caused issues with state funding. For example, the state had to cut the organization’s financial support by roughly 20 percent, and funding expected in July was not sent until August.

The organization’s board president said he understands why the state cut funding, but also emphasized the difficulty of continuing Literacy CNY’s efforts without such support. With approximately 60,000 residents reading English at or below a sixth-grade level, Onondaga County cannot afford to lose Literacy CNY.

“If we could teach them to read, that would reduce our poverty rate by the same percentage that we’re increasing our literacy rate,” said Kreisel, noting the poverty problem in Syracuse is also a literacy problem.

The other speakers underscored Kreisel’s connection of poverty to illiteracy, and many suggested illiteracy was the biggest contributor to inter-generational poverty in America.

“Your kids are home from school, you probably lost your job because you can’t work remotely, you can’t look up health information,” said Kreisel, emphasizing how illiteracy can affect every area of a person’s life. He also noted that parent’s who are illiterate cannot assist their children with schoolwork in any subject. He posed: How can a parent reading at a low level research, for example, Common Core math in order to help their children?

“This is one of the worst kept secrets in America,” Stirpe added. “Something that nobody talks about, except maybe this week, once a year.”

The assemblyman described the potential economic benefits of investing in adult education, expressing hope that the federal government will come through with another stimulus package that would include funding for state and local governments, which have thus far gone underfunded.

“Even though the states have not been able to adequately fund these types of programs, they could put a large amount of money, $25 billion or so, for adult education,” Stirpe said. “The reason — we would add another $2.2 trillion dollars to the American economy if we could get those people to read.”

This stresses how financial investment now could pay big dividends in the future.

“Teaching adults now helps them become more productive, break the cycle for their children, become better employed and take better care of their families,” Kreisel said. “It reduces the strain on all of us.”