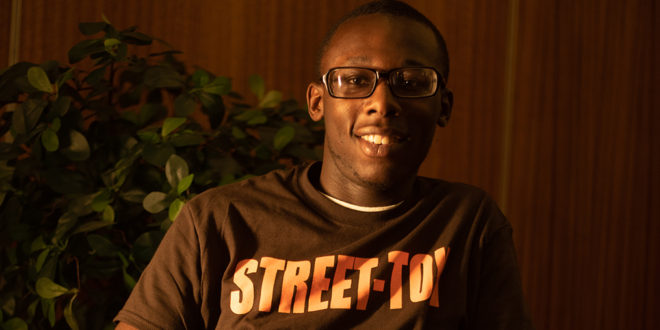 Would you still get to school on time, if you had to walk through a war zone?

Students living on Syracuse’s South Side have seen peers killed in the blocks between a bus stop and a front porch. They turn each corner, never knowing if it will be their last. In 2017, Syracuse’s South Side was found to have one of the highest teen murder rates in the nation. Much of the violence was found to be motivated by retaliation from gangs, with 27 different gangs operating in the South Side alone, according to data from the Trauma Response Team. The Syracuse Police Department reports gangs members can be as young as 12.

Nyquest Robinson, 16, grew up in housing projects on the South Side and says living among this level of violence clouds the line between a victim and a perpetrator. At 14, he was placed on probation for a felony charge of robbery.

“My mom tried to move me out of the projects when I was getting into trouble so I could focus on school, but I kept going back. Everyone I knew was down there. I could not just leave. It was like an addiction,” Robinson said.

In October, Gov. Andrew Cuomo’s Hope Initiative awarded $205,000 to the Street Addiction Institute Inc. (SAII), a local nonprofit, for the creation of an after-school program that provides an outlet for students like Robinson to cope with trauma from street violence. The nonprofit’s model has garnered interest due to its focus on treating violent behavior in youth as an addiction to street crime, often brought on by trauma. The money serves as the latest acknowledgement of the South Side’s increased need for trauma services as violence among teens continues to rise as well as Street Addiction Institute’s success in creating programming run by South Siders for South Siders.

Since launching in 2015, SAII says it has increased its non-recidivism rate from 80 to 92 percent for all youth enrolled to curb violent behavior. SAII’s trauma team has also grown to help 300 to 500 families within the past year. The new after-school program is designed to build on SAII’s Let Me Be Great program, one of the three branches of SAII’s services for the community — each of which focuses on a different community demographic.

The Let Me Be Great program focuses on educating students affected by street violence and offering them activities such as yoga and basketball where they can create a community among peers who are experiencing similar trauma from their neighborhood. Students perform a minimum of 10 community service hours per month and must create “smart goals” with SAII mentors, or sponsors, to ensure improvements to grades and attendance.

Students attending the Let Me Be Great after-school program are city students who have missed at least 85 percent of school during the 2018-2019 school year, often due to complications from street violence. Students are required to attend a “Greet the Law” workshop, where they partake in open dialogue with law enforcement over finding positive outlets to deal with trauma. Such positive outlets may include art or photography, which the students will turn into a project and showcase within the program by the end of the quarter. The success of the program will be determined by their enrollment rate and how many of the students reach their “smart goals.” Ultimately the $205,000 will go toward ensuring students have access to their newfound positive outlets and other community-building activities that inspire them to focus on school and receive the trauma support they need.

The model of trauma support introduced by SAII was created by South Side native Timothy “Noble” Jennings-Bey, and published in his 2012 study “Street Addiction: A Theoretical Model for Understanding the Draw of Street Life.” Alongside Syracuse University Falk College researchers, Jennings-Bey analyzed the behavior of gang affiliated men associated with street crime in an attempt to understand why they perpetrated violence. The study showed that consistent engagement with violence can create a release of dopamine within the brain. This release creates a sense of gratification that encourages the cycle of behavior and makes it highly addictive. Victims of trauma and kids are especially vulnerable since the brain can develop triggers that stifle the development of healthy, socially acceptable behaviors.

“These kids experience all this trauma before their brains are fully developed so their behaviors do not meet the expectations of society,” Jennings-Bey said. “Their growth is stunted by being exposed to so much violence.”

Jennings-Bey’s discovery about the addictive nature of violence drove a new wave of cultural understanding — shifting from one of law and order to a need for rehabilitation. Last June, an Israeli research institute contacted Jennings-Bey looking to incorporate his theory into tactics to discourage gang violence in Gaza. Also agencies in the United Kingdom called looking to use Street Addiction’s strategies on Nigerian gang populations. Jennings-Bey says the hope is his model continues to be applied to communities around the world, allowing those similar to his South Side friends killed at the hands of street violence a second chance.

“Street Addiction’s model applies to any community. We can give you a formula and train your staff but we cannot go in and do it for you. You need people from the community that children can connect to,” explained Dr. Najah Salaam, the chief operating officer behind the Street Addiction Institute.

Salaam is also a South Side native and former administrator at Dr. King Elementary School. She has spent 20 years working as a liaison between the community, local law enforcement and city schools. She says that the next step for the SAII is providing respite services for youth. Respite services are usually afforded to those seeking rehabilitation for substance abuse, allowing addicts to undergo rehabilitation outside of their normal environments. For these kids, respite will mean spending time outside of the neighborhood to heal from trauma. Noble says this is all a part of the detox, or “streetox,” necessary to treat those exposed to high levels of violence.

Currently SAII has 60 youth enrolled in its Street Court program that focuses on youth displaying street addictive behavior and often with prior convictions for street crime. Robinson is one of these youth. As part of his probation, he was invited to attend Street Court.

Since then, Street Court has taken him to museums and block parties set up by Jennings-Bey to show kids the impacts of investing within the community. He undergoes regular meetings with sponsors who set attendance and academic achievement goals as well as emotional and mental goals to promote healthy well-being. Salaam says she hopes to set up more trips outside the community to show all the opportunities just beyond reach, as long as they work on their addiction. SAII has also expanded its Trauma Response Team after a record number of full-time and part-time volunteers joined during 2019. Volunteers for the trauma team have also increased their caseload from 15 to 18 in the past year while making themselves available to families 24/7.

As of this year, SAII is financially independent with no need to funnel money through United Way, instead it operates through contracts with the county, state and the city of Syracuse.

Jennings-Bey and Salaam explain that what kids like Robinson need now is empathy.

“When we see veterans come back traumatized with behaviors that are maladaptive, we don’t say where’s the accountability on your behalf, we get them help,” Salaam said.

Dejuan Johnson says empathy is why he first volunteered at SAII. This past year Johnson began also sponsoring Robinson and 39 other kids who are a part of the Street Court program, even though he already has three kids at home.

“Not every kid has a father in their life so to step up into that role, you feel good,” Johnson said.

Sponsors have 48 hours upon meeting the child to contact their families. Together, they establish a schedule to meet with the children throughout the week and support their growth within the program. The sponsors give out calendars and help kids with their probation, occasionally attending court alongside them. Sponsors are also required to be available to their sponsorees 24 hours a day, 7 days a week in case of an emergency.

“As a mother or a father, we just picture that it could be our kids,” said Nina Mattison, another sponsor for Street Court.

Robinson says he hopes to one day be a sponsor for SAII. The close relationship he’s developed with his sponsor, he says, has opened his eyes to the opportunities within his community. The two often meet up after Robinson finishes school.

“Sometimes we’ll go out to eat and talk about girls. We always find a way to make it about girls,” Robinson joked.

During these talks, Robinson is given permission to be neither victim nor perpetrator. He’s just a kid, looking for advice from someone who knows the struggle and diligence to guide him around the corners.