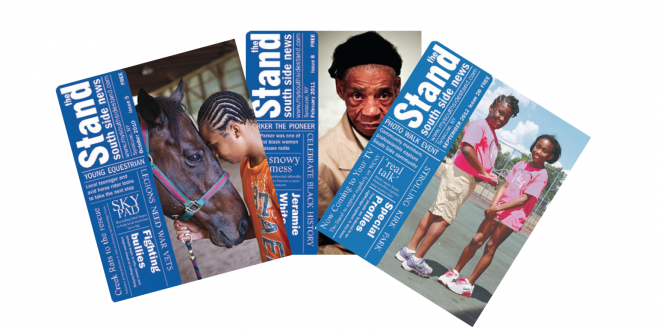 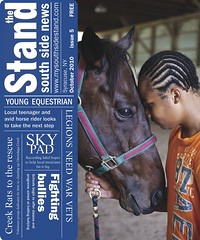 The Stand Board of Directors explain their favorite past covers

The cover of The Stand’s March special anniversary issue features some of our board members’ favorite covers over the past five years.

This cover from October of 2010 features Jovan Daniel who trained and worked at an equestrian center in Nedrow. The issue featured a photo spread and profile story on Jovan and his horse named New York to Paris.

Read on to find out why each cover became their favorite.

TAJUANA CERUTTI
Tajuana Cerutti’s interest in The Stand was sparked after she read the newspaper’s summer issue. The cover story featured a staff member from On Point for College, an organization that provides assistance and support for students seeking higher education. Cerutti had a personal connection with the organization. This story, in particular, has stuck with her because she felt it was a “great piece about the power of education, determination, support and dreams.”

CHARLES PIERCE-EL
Charles Pierce-El had a difficult time narrowing down his favorite cover story to just one. He told us no one could question his love for the newspaper because he has so much pride in it. His favorite stories have involved the community’s youth and elderly. The Stand’s dedication to showing readers the positive side of the South Side was instrumental in Pierce-El’s decision to become a board member.

SHANTE HARRIS EL
Shante Harris El’s favorite cover story is “Meet Frank Fowler,” featured on the publication’s very first print issue. She compared the newspaper with Frank Fowler, the new police chief at the time. Like Fowler, The Stand was also new and had a lot to prove. Harris El is proud of the reputation The Stand has built. She credits each positive cover story, starting with the first one.

REGGIE SEIGLER
Reggie Seigler told us one of his favorite covers featured Stevie Wolf, “The Blues Master.” This issue’s cover struck Seigler for two reasons: He was there when the picture of the musician was taken, and he thinks Wolf has such an authentic blues look. In Seigler’s words, “Look up blues in the dictionary, and you will see a picture of (Wolf).”