Midland Avenue, Valley Drive and Salina, State, Clinton and Warren streets are recognizable roads on the South Side. They also host residential programs for the housing vulnerable ranging from Catholic Charities Men’s Shelter at 1074 S. Clinton St. to the Salvation Army Transitional Apartments and Parenting Center at 667 S. Salina St.

Homelessness and segregated housing were two of the main topics discussed at a public meeting for the Consolidated Annual Performance Evaluation Report held on July 14 in the Common Council Chambers. 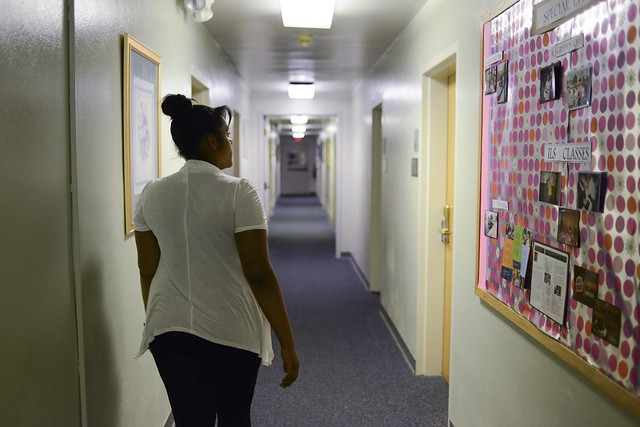 A resident walks down the hallway on the second floor where 24 apartments are available at the Salvation Army Transitional Apartments and Parenting Center.

This meeting was required by the City of Syracuse’s Citizen Participation Plan and its goal was to seek feedback from community members regarding the allocation of resources in their neighborhoods.

“People are the doers,” Common Councilor At-Large Jean Kessner said, “We need your ideas. You are our life, our inspiration.” Kessner is the chair of the Committee on Neighborhood Preservation (Homeless and Housing Vulnerable).

Commissioner Paul Driscoll, head of the Department of Neighborhood and Business Development, said that his office has been using Emergency Shelter Grants (ESG) for homelessness prevention and stabilization, rapid rehousing and street outreach.

“In order to solve the problems that got you into a shelter, first we need to get you out of the shelter,” Driscoll said. “Our Housing First model allows people to address other aspects of their lives after they achieve proper housing.”

Driscoll told the audience that the consolidated public document put out by his department took into account the recommendations found in the 150-page CNY Fair Housing report. “We incorporated recommendations such as those related to forms to reduce the concentration of poverty,” he added.

In the audience was Sally Santangelo, executive director of CNY Fair Housing, who lauded the city for addressing the concentration of poverty with affordable housing programs. Santangelo is also the chair elect of the Housing and Homeless Coalition Advisory Board. “Our report preceded the U.S. Department of Housing and Urban Development’s new guidelines for rules to grantees of federal housing funds,” she said. “Our report was ahead of the game in its assessment of segregated housing.”

Driscoll seemed to concur with Santangelo. “The city’s housing approach, based in part on the report, is the model for the country in many aspects,” he said. “Even with a small staff on the front lines.”