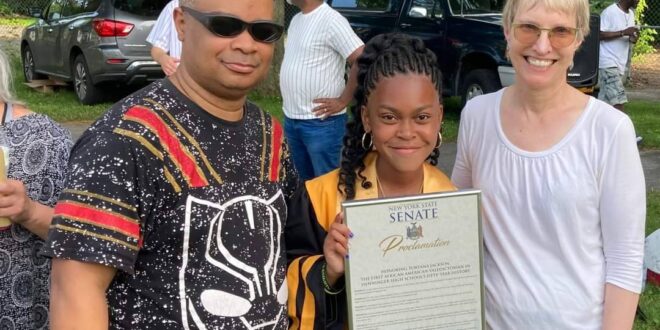 After roughly a year of Zoom school, Toryana Jackson woke up to another day of classes on her computer. Before she logged on to class, she got a call.

“I answer it, and it’s my principal, Ms. Dowdell,” Toryana recalled. “She said, ‘I want to tell you this exciting news. You are valedictorian. We’re so proud of you.’”

In an instant, Toryana went from high school senior to history maker. She is the first Black valedictorian in the 56-year history of Henninger High School. She’s even the first female, Black student to win the honor in the Syracuse City School District’s 173-year history. Much like her achievement, the phone call was unprecedented.

“She went on and on about how proud she was of me. And it was so touching,” Toryana said of the surprise call.

After hanging up the phone, she rushed into her parents’, CJack and Torinza, bedroom, calling, “Mom! Dad! I have something to tell you.”

“I told them, and we all started crying,” Toryana said.

Torinza couldn’t have been prouder; tears welled in her eyes.

“And I don’t really cry,” her mother said.

You don’t become valedictorian by accident, though Toryana never set her sights specifically on the honor. She focused on school, worked hard and took advantage of all opportunities that came her way. Even her parents were stunned to learn she was first in her class.

“She worked so hard, and we were gunning for her to be like, salutatorian,” her mother, Torinza, said. The unprecedented nature of her win was the cherry on top. “To find out that she was the first female African-American, that just made it even sweeter.”

Toryana may not have been hunting for accolades, but her humility didn’t stop others from noticing her academic potential.

“Back in eighth grade, I had teachers that said that I probably would be the valedictorian. So I kept it in the back of my mind, but I didn’t actually think it was going to happen,” Toryana said. “I just wanted to work hard for school and be the best I could.”

Her parents noticed her natural work ethic and talent, too.

“Whatever she did, she excelled,” CJack said.

Toryana’s excellence isn’t coincidence, and it isn’t luck either. She spent her final year of high school online, isolated from her peers during the school day. When the pandemic hit, she didn’t have her own laptop, later receiving one from Le Moyne’s Upward Bound program, which is for high achieving high school students. She’s been involved in the program throughout her high school career. She also runs — cross country and track — and plays flute in the band. She’s off to Wellesley College next year, with a full ride scholarship through the highly competitive Questbridge program, which matches exceptional low-income students across the country with the nation’s most selective colleges.

“I’m super excited about it,” said Toryana, who describes the campus as beautiful. “I think I’m gonna love it there.”

Toryana graduated June 20, a day she and her family will remember as special. Her entire family was able to attend the in-person graduation, a highlight after so much of her final year of high school was completed virtually due to COVID-19. As valedictorian, Toryana spoke at the ceremony, encouraging her peers to chase their own ambitions.

“I hope this accomplishment inspires younger students to believe in the abilities within and go for what they want in life,” Toryana said.

The ceremony wasn’t the only celebration. Sen. Rachael May presented her with a proclamation for her groundbreaking achievements at an event hosted by Jubilee Homes and I Know I Can Radio. Toryana’s father CJack was also honored with a father of the year award — all presented on Father’s Day.

Graduation is over, and now it’s summer. Before Jackson goes off to college, she’d like to see the ocean. After she graduates, she wants to become a journalist, like her father.

If her track record holds, she’ll have no problem achieving it.