Harold Jerrod Blackmon’s home is more than just a music studio. It is a place for local youth to escape the dangers of the streets and hone their musical creativity. Blackmon, CEO of the South Side music group called Crime Street, is an award-winning producer known in the music world as Mazaroddi.

For many South Side youths, Harold Jerrod Blackmon’s home is more than just a music studio. It is a place for them to escape the dangers of the streets and hone their musical creativity.

Blackmon, CEO of the South Side music group called Crime Street, is an award-winning producer known in the music world as Mazaroddi. “Everyone calls me Rod or Roddi Bizarre so I came up with Mazaroddi.”
At 44 years old, Blackmon has two awards attached to his name. His style is in transition. Crime Street’s early work deals with violence and the drug trade. He now wants to put forth a more positive message.

“It’s more about what can I do to better myself and send a message to the youth of how can I be the next president,” he said. “That’s what I’m trying to go with.”

Since Crime Street first got together, Blackmon hasn’t charged members for studio time. He said he knows studio time is expensive and that many of the youngsters could not afford it. He does, however, have expectations for those hoping to use his studio. Blackmon said they must have a job or be getting an education.

Jahdal Williams, Blackmon’s 21-year-old cousin, is a member of Crime Street. Williams, also known as “J-Streetz,” has been in Crime Street since he was 16. 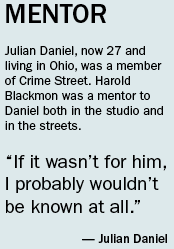 Williams said when he was younger, he would sit on the floor in the studio and watch the other members of Crime Street perform. He said he knew he wanted to be a part of the group and Blackmon gave him the chance.

“If the studio wasn’t there, I probably would have taken a whole other direction,” Williams said. “It kept me out of a lot on the streets.”

After high school, Williams did not go to college, but Blackmon encouraged him to enroll. Blackmon said he would tell him, “You are young, go back to school.”

Now Williams is in his first year at Onondaga Community College and is majoring in humanities. His love for music is still alive. His first song, “Just Me,” reached No. 1 for about a year on reverbnation.com, a music marketing Web site and forum.

Blackmon has four sons — 25, 18, 14 and 10 — and he says he always talks with them to help them with their concerns. He believes times are tougher today for teens than they were when Blackmon was a teen and that his community is less cohesive.

“My grandmother used to say, ‘It takes a neighborhood to raise a child,’” Blackmon said. “There was more of a community type situation back then.”