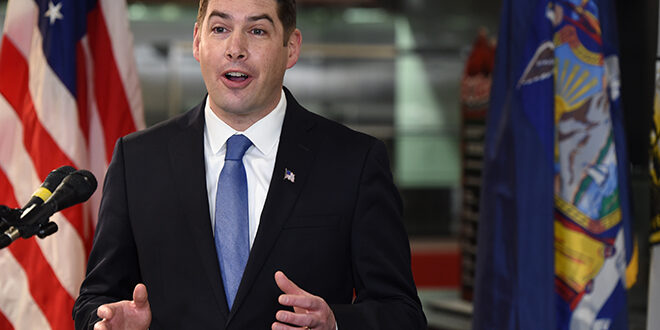 Mayor’s Forth State of the City Address Gives Hope

The theme of Mayor Ben Walsh’s State of the City speech on Thursday night was progress despite the pandemic.

Walsh broadcast the speech live from Salt City Market, a food hall on South Salina Street that will offer a range of cuisine as diverse as Syracuse residents, which is set to open Jan. 29, the mayor announced to the press following his address.

In many ways, the in-progress Salt City Market served as a fitting metaphor for the city itself as the mayor reviewed the challenges and triumphs Syracuse faced in 2020 and how its various communities and residents are fairing.

“At the core of this success is cooperation,” Walsh said. “I cannot imagine that a community fighting among itself could effectively respond to the challenges of the last year. Make no mistake, there are still too many who are struggling and there are many challenges still ahead of us, yet, as we have seen so clearly tonight, we are on the right track.”

Among the major successes of the past year, Walsh cited the Syracuse Financial Empowerment Center. The center helped about 630 residents, increasing savings by half a million dollars and reducing debt by $2 million collectively.

Walsh also spoke on the flourishing career-tract program to connect PSLA at Fowler students with the Syracuse Police Department. The school is partnering with SPD and Onondaga Community College to provide a cadet program along with coursework at OCC for students to complete the two years between high school graduation and eligibility for the police academy.

The initiative will hopefully keep high school students who are interested in law enforcement engaged until they can enroll in the academy at age 20, Walsh said during an interview with the media. The aim is for this to increase the number of Syracuse officers who reside in the city. Walsh spoke briefly also about New York State legislation he is supporting that would mandate officers live in the cities in which they work.

Police reform has always been important to Walsh’s administration, he said, but after the national reckoning with systemic racism and policing this summer, he passed his first executive order as mayor. The order included 16 actions intended to improve the relationship between SPD and the community. In a year of escalated aggression, SPD saw a decrease in use of force. Walsh referenced the June 19 live-streamed, four-hour meeting he hosted to hear from police reform advocates.

“It was heated, and pointed, often directly at me, and it was time well spent,” Walsh said of the hearing. “It is only through listening that we can truly understand, and through seeing and feeling that we strengthen the motivation and urgency to act.”

Walsh also spoke about the many renovations and construction projects the city can expect to see in the next two years, including the renovation of the city’s Central Tech High School into a new STEAM school, improvements on multiple city district schools and efforts to prepare for the I-81 viaduct replacement project. The mayor assured listeners that those who live in the shadow of the viaduct will benefit from future investments.

“Not only are they great job creators and revenue boosters,” said Walsh in reference to these projects, “(they’ll create) real opportunities for real, working people. We’re being very intentional on how we’re making those connections.”