Syracuse’s three mayoral candidates participated in a question and answer forum Thursday, Oct. 22, at the Most Holy Rosary Church on Bellevue Avenue.

Otis Jennings, Stephanie Miner and Steve Kimatian, were all on hand to answer questions posed by the event’s organizers, Syracuse United Neighbors (SUN). 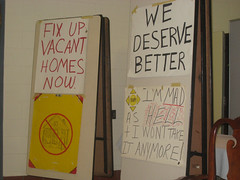 Though the forum was originally intended to be a debate, scheduling conflicts made that impossible. Instead each candidate was given 30 minutes alone to answer the questions in front of an audience of about 40.

Each candidate was asked the same questions, with issues ranging from vacant housing, crime, economic development and jobs. At the end, they were given two minutes to explain why they were best suited to be the next mayor of Syracuse.

Jennings and Miner, both reiterated that their experience in city government prepared them for the difficult tasks that lie ahead.

Miner, a former labor lawyer, felt that her experience as a common councilor-at-large over the last eight years, has given her an idea of what qualities are needed to be an effective mayor. 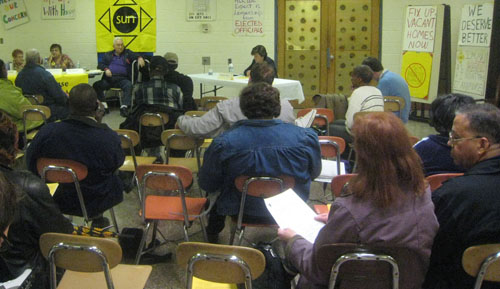 Kimatian, a former television executive, struck the opposite cord, claiming that being a newcomer to city politics was one of his virtues.

“I’m not a career politician, but I know enough to know we need to change things,” Kimatian said.

Though all three candidates reiterated talking points from their campaigns, it was good for the audience to get to see them in person. It was also a chance to hear issues directly related to the South Side be addressed.

“The South Side in so many areas is ignored and marginalized. We think it’s important to have them come down and answer the questions of people who live in the area,” said Phil Prehn, a community organizer with SUN.

Barbara Devoise appreciated the community specific questions and was pleased by the solutions the candidates presented. She was still curious to see how the eventual winner would effect change.

“They talk some good game,” Devoise said with a laugh. 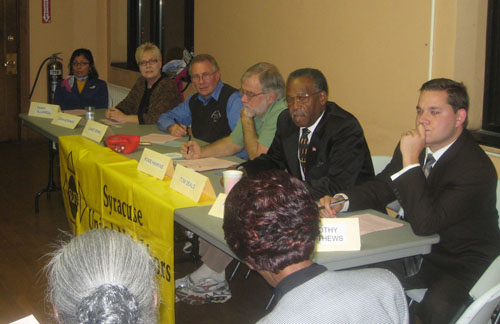 Although not a South Side resident, undecided Raymond Trumble attended the forum to see how the candidates spoke in different communities, if there were differences. He detected none, but was still unsure of which way he would vote.

“It’s still tough,” he said. “I’m going to have to pay more attention.”

One consensus was established among all candidates: that unity was needed to really improve Syracuse.

“Working together collectively, there is nothing we cannot accomplish,” Jennings said.