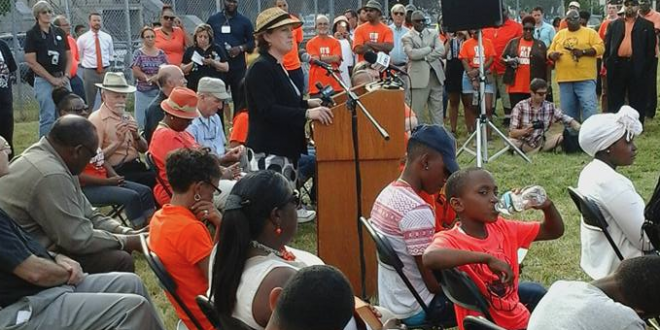 On June 26, like every Sunday since moving to Syracuse from the Midwest last August, Andrew Lynch, a Jesuit Volunteer Corps member, went from his residence in Berrigan House to St. Lucy’s Church for Mass. He plopped into his favorite pew. Then he listened attentively to the homily delivered by the Rev. Jim Mathews, the church’s pastor, who made a special invocation to his flock.

Lynch learned that a Celebration of Unity had been scheduled by the congregation to take place at Skiddy Park four days later. Father Mathews had called Twiggy Billue, one of the leaders of the local chapter of the National Action Network, in order to co-sponsor the event, referred to as “ecumenical liturgy” in a press release. The celebration came as a community response to the death of Gary Porter by gunfire near the park, where a Father’s Day party was being held. Porter, who also used the name Terry Maddox, often stayed in a bedroom on Cannon Street on Syracuse’s South Side. 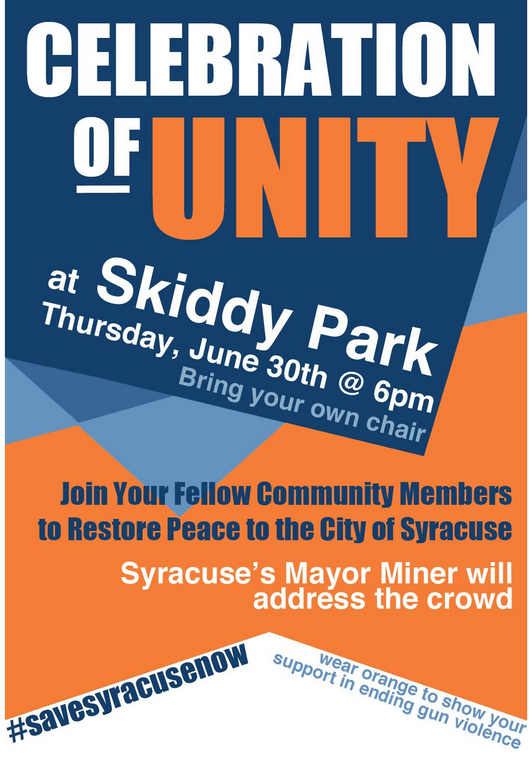 Serving as mistress of ceremonies for the Celebration of Unity, Billue said that its purpose was “to ask for peace and the safety of the community.” She then introduced two youth from the Spanish Action League to a crowd of over 200 people in attendance. John Pizarro and Marimar Marquez, both 18-year-old 2016 Fowler High School graduates, described their trauma after being at the park while gunshots started ringing on Father’s Day. Alternating between Spanish and English, they said: “Peace is for all, peace between each other would be beneficial for our city, peace is the key for all of us. Young people are asking us to stop the violence and no longer tolerate this madness. We need to create a culture of nonviolence that respects human beings and promotes mutual understanding. We have to say something, do something, to take charge of our city.”

The overarching message resonated with other young speakers who strode to the lectern. Monique Freeman said, “Our goal is to reclaim our city so that children can live in a safe community.” Miguel Perez told the audience, “Children should feel safe, loving one another, playing ball and dancing, and not witnessing fighting. We need to turn their sad, mad and confused faces into happy faces.”

The event concluded with the Rev. Mathews leading the public in singing “Our Father” while its members formed two semicircles holding hands. Prior to that, another clergy person, the Rev. Regina Reese-Young of Hopps Memorial Christian Methodist Episcopal Church, reflected on the eight beatitudes in Matthew 5:3-12, which narrate the Sermon on the Mount. She added, “We should focus on restoring our community. In order to turn our community around, put God first. Dear God, help me be there for others when they are sad.”

The whole celebration lasted an hour, 20 percent of which was devoted to a speech by Syracuse Mayor Stephanie Miner, who explored the causes of long-term structural or systemic violence, a term popularized by Norwegian sociologist Johan Galtung, and which includes institutionalized racism. As a primer example of this kind of racism, Miner referred to the practice of redlining.

“In 1934, President Franklin D. Roosevelt created the Federal Housing Administration (FHA) to jump start the economy by having the newly created FHA back up local banks in their issuance of mortgages. The FHA adopted a system of maps that rated neighborhoods according to their perceived stability. On the maps, the green areas were those that the FHA would provide 100 percent backup in cases of default. Blue  –  85 percent. Yellow  – 15 percent. Red  – 0 percent,” Miner said. “Neighborhoods where black people lived were rated D and were considered ineligible for FHA backing and colored Red. Thus, the term red-lining was coined. So if you were a local bank in the ’30s, frankly up until the late ’60s, there was not much incentive to provide mortgages in the yellow or red areas. The FHA explicitly refused to back loans to black people or even others who lived near black people.”

She went on to expand on other kinds of racism. “And, of course, we cannot forget the overt racism and bigotry that prevented black people from getting jobs. There was a time where our own city judged candidates for jobs by assuming associations. So if you were related to, knew, or lived next to someone who had a felony conviction or had financial struggles, you would not be hired; thus, effectively eliminating huge swaths of city residents,” Miner added. “This is our history  — yours and mine. In order to have a just city, we need to understand it. Understand that poverty is more complicated than simply thinking someone is poor because they do not work as hard as you and I do. Understand that the poverty we see was caused by many decisions which none of us here made, but, for which we are responsible. Those decisions have left a bitter residue in families’ histories and lives.”

Finally, Miner suggested that racism and poverty may lead to frustration and anger in those affected by them, and this may escalate into violence, but she didn’t explain in this occasion what her administration is doing to address the problem of structural violence.

Lynch, the Jesuit volunteer, heeding Rev. Mathews’ invocation, went to the Celebration of Unity, after his workday as a community advocate at ACR Health, located near Skiddy Park. “I didn’t know that Mayor Miner was going to speak at the event,” Lynch said. “I rarely hear politicians acknowledge issues of race. It was nice to hear her talk about the background of violence and the history of racism.”