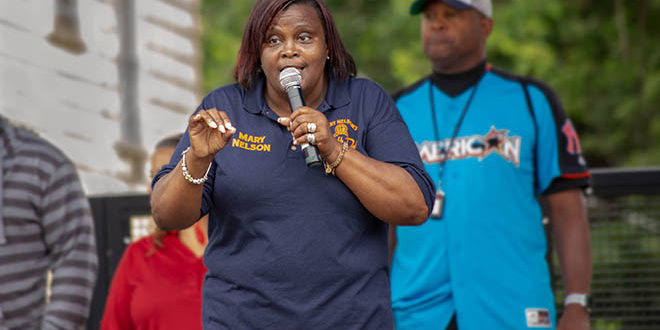 Mary Nelson Back At It

As the overcast sky began to loom over Syracuse, Mary Nelson and her team of more than 200 volunteers geared up to distribute back-to-school supplies to local students.

The 17th Annual Youth Day Barbecue received more than 10,000 registrations this year for its school-supplies giveaway and barbecue held Aug. 18 at the corner of South Salina Street and Wood Avenue. Nelson began the annual giveaway in 2002 to shed light on gun violence, and to petition the importance of children remaining in school. “It’s huge every year,” she said. “It’s been 17 years, now everybody knows I do it.” 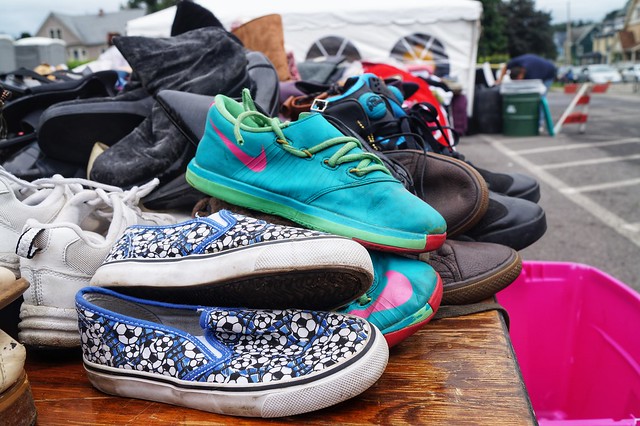 With the aroma of barbecue smoke gradually spreading across the neighborhood, Nelson and her volunteers began the parade from South Salina Street with people of all ages holding placards about gun violence. The parade ended where it began, marking the commencement of the giveaway. A white tent providing shelter to several boxes of backpacks awaited new owners as the queue grew longer by the minute. From crayons to notebooks, sticky tape to pencils, and novels to coloring books – numerous school supplies were packaged inside backpacks before being distributed. Volunteers asked each child’s preference and carefully picked one that was the closest match.

“No kid is going to come in today and walk away with nothing,” Nelson announced to the line.

For Dream Richardson, a 12-year-old student, receiving school supplies is the best part of the giveaway. “I like school,” said Richardson, who attends the event every year with her family and friends. Her favorite thing about school is learning new things, and her dream job is to become a teacher. “I like math,” she shared. “I want to be a math teacher.”

Apart from distributing school supplies, Nelson had also arranged for free grocery and bread pickup stalls on the other side of the street. After receiving the backpacks, children and their parents walked to the grocery stalls and picked up a bag each. In addition to pickups, there were stalls by health care services, to raise awareness on childhood health and dental hygiene.

Mirelsa Galdon, 30, a personal caregiver by profession, brought her 4-year-old daughter to the giveaway. “It’s kind of sad. There’s a lot of poor people in Syracuse,” Galdon said. “I think it’s really nice that someone takes the time out to gather volunteers. This means that there’s some people out there that still care because this world is very mean; it’s very cruel.”

Sen. David Valesky, who attended the event, said it’s a great way to prepare students for the upcoming school year. “Mary Nelson is as aggressive as anyone. She’s built a great team of volunteers that helps to put this together,” Valesky said. “Every little bit helps, and I think it’s an important step in the vortex of these kind of things we can do that can go a long way to push it back against gun violence.”

According to City-data.com, 15.5% of South Side residents have only a high school or equivalent educational attainment versus a Syracuse average of 25.3%.

Jacke Grace, author of “Leeroy: The Wide Mouth Frog,” signed her books, providing a special notes for each child inside. Grace brought 105 books to sign and giveaway, which were purchased by Crouse Hospital in partnership with the Syracuse Community Health Center to hand out to children attending the event. 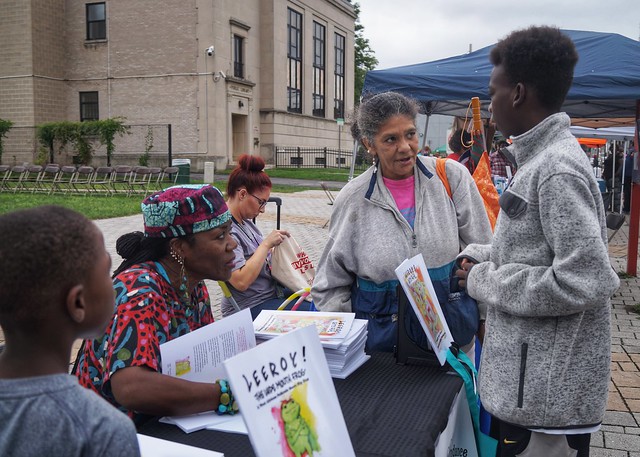 Jacke Grace signs copies of her book outside of Beauchamp Branch Library.

“I think this is an awesome event, and it’s wonderful to get us thinking about how we can better, not only, feed our mind but our bodies and our whole selves,” Grace said. Giving away her books was an effort to promote literacy and continued-reading throughout these final days of summer.

“Teach your kids to be what they want in this world,” Nelson told the crowd from the stage. “Teach them to dream and dream big.”