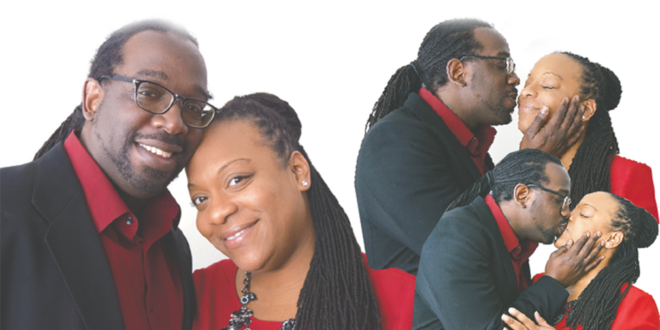 At first they didn’t believe in marriage. Fate had other plans, changed their perceptions.

The trend of more and more young adults waiting to get married continues, according to a 2018 U.S. census report. The nation saw a 30 percent decrease in the numbers of young couples tying the knot over the last 40 years. Although large percentages of married and unmarried couples say love is an important reason to get married, as well as wanting to make a lifelong commitment, according to the Pew Research Center, less of them are pursuing the lifestyle.

With roughly 50 percent of Americans marrying, does that mean less love is in the air? Maybe for some, but not for these local couples who are proving that true love still exists. While they may not have always been pro-marriage, they have since embraced the lifestyle.

The Lewises
Maria Maldonado-Lewis decided to start a radio program after she became upset upon hearing a radio personality’s negative response to someone having marriage troubles. She says that day she heard God saying that she should start her own show. For three years now, she and her husband, Keenan Lewis, have empowered the community together, offering positivity, humor and funky tunes.

Keenan, 40, and Maria, 41, have been attached since the day they met in 2007, but individually were never keen on the idea of marriage. Both grew up exposed to toxic relationships and thus didn’t see hope for themselves when it came to marriage.

“We both were afraid to get married,” Maria said. “We both came from households where we didn’t see healthy marriages, so that took us away from wanting to get married.”

They were even reluctant to start a romantic relationship. Maria explained that Keenan was not her type when they first met. By fate — or as they explain it, by God’s plan — they met one night outside a club and instantly clicked.

“When we first met, it was our conversation that made us just connect. It became a friendship. We both said we’re going to be nothing but friends,” she said.

Although it was a “just friends” agreement, they ended up falling in love.

“Ups and downs and ins and outs, makeups and breakups of relationships come to the point where like you know how you feel about this person regardless of other things you’re going through,” Keenan said. “You know you want to be with this person in the end, and the only person you want to be with regardless of the things that may not work out or not see eye to eye on.”

With that realization, they decided to get serious.

“We’re people who are trying our best to change the dynamic of our families and the ways that they think,” Maria said. “We wanted to show them that marriage wasn’t bad, so that was part of it.”

The dynamic had already been shifting as Maria began to see Keenan as a family man.

“The first time I started to catch true love feelings is when he came to my son’s soccer game and started going to his boxing matches,” she said. “My son yelled out ‘Bye, dad’ one day and I knew this was a man I wanted in his life.”

Keenan said it was probably the same for him. Not only did he want Maria in his life, but also Maria’s son. So the night he proposed, Keenan asked Maria’s son, Antwan Days, for her hand in marriage.

“Because we both had that mindset of being afraid of marriage, I didn’t think he was going to propose. So that was way far out of my mind,” Maria said.

Keenan says the proposal was a year and a half in the making. He waited until Days’ graduation party to propose.

They say the number one factor that played a part in their marriage is God. Two weeks before the day they met, Maria asked God — even though she wasn’t ready at that moment — to open her eyes and open her husband’s eyes to her. Keenan also had a similar conversation with himself not long before. They explain it wasn’t love at first sight, but God’s destined plan for them to meet.

Despite their deep admiration for one another, they weren’t in a hurry to say their vows at first, though they thought a lot about marriage. Keenan and Maria went to church and sought out marriage classes and counseling to make sure they were doing the right thing.

“You know, getting us in church really made us understand love and really understand being able to love your spouse like God loves the church,” Maria said. “We definitely can’t leave that out because that’s the number one thing that has kept us together.

Still, Keenan said that it’s important to not want to get married for reasons such as marrying because of kids or wanting to have a house together.

“Our motivation was purely based on the feelings we had for each other,” he said.

Their example of love had a trickle-down effect. They noticed that ever since getting engaged, everyone around them started to make such a commitment. They believe by showing stability and happiness in their relationship, they are changing their family dynamic for the better.

“I think it helped them to believe in love all over again,” Maria said.

The Parkers
Rondell Parker finally got Tatiana Nobles to come over to his apartment after seven years of asking. For several years, whenever he’d ask her to stop by, their conversations would abruptly stop.

“Cat and mouse game,” Rondell said. “It went on like that for years.”

They dated for two years in the beginning but then broke up. However, Rondell persisted. He’d message her on Facebook asking how she is, wishing her happy birthday and liking pictures. At times when he thought he had a chance, she would just slip away, ghosting him.

“Generally, I just wanted to see her, but it probably wasn’t the right time, right place, right circumstance,” Rondell said.

He was right to think that then, but years later, they ran into each other. Impressed with his new style and aura, Tatiana decided to call him.

Once again, he asked her to come over. Staying true to her pattern, Tatiana tried giving as many excuses as she could, including having to cook dinner and taking care of her baby girl.

This time, Rondell didn’t accept any excuses. He told her to bring the baby because he was already cooking dinner.

“When I walked into his apartment, all I could remember was that it was so warm and inviting,” Tatiana said. “It was good energy.”

Since then, the couple has been inseparable.

The pair first met in 2005 as neighbors but didn’t marry until four years ago. They explained that they were both non-traditional; living independent lifestyles, pursuing their passions. They say their commonalities are what made them fall in love with each other.

“She was sitting on the couch studying and she had three or four books around her and coffee,” Rondell said. “Just going to town, talking to me, talking on the phone, studying at the same time. I was just sitting there saying ‘wow.’ I loved to hang with her just to watch her study.”

He said that he hadn’t seen a woman that focused before.

“I think we both fell in love with each other’s gifts,” Rondell said.

Tatiana agreed, saying she admired how focused Rondell was with his music.

“He’s a DJ so he had his computer, his turntables, his crates and records and his headphones on,” she said. “Just his focus; the music matching up the beats and seeing how it sounded, like that, I was like ‘Oh my God.’ It was attractive.”

She added that not only did they appreciate the other’s talents, they learned together. Rondell began to pick up books; Tatiana confessed to having broken a couple needles on the turntable.

While Tatiana said that she wasn’t hearing wedding bells right away, Rondell said he always knew she would become his wife.

“I always say it’s divine,” he said. “I always say God told me because I knew 100 percent when I met her, the first day.”

They say Rondell had been proposing for years but Tatiana kept running. She was oblivious to all his signals. So, he finally proposed one night with DIY paper rose petals, hearts and leaves, receiving help from Tatiana’s daughter, Amari.

He used them to decorate each floor of the apartment building and waited for her to return the next morning. As she climbed each floor, she read one-by-one “Will you marry me?”

“I walked in and they were up,” Tatiana said. “They looked exhausted. Then he pulled out the ring. I was like ‘What’s going on? Why do you guys look like zombies at 5 in the morning?”

She says true love is very real but it doesn’t come ready-made. She explains that sometimes she doesn’t like Rondell, and sometimes he doesn’t like her, but they always remember that they love each other.

“This is not just a thing. This is ‘the’ thing and I’m blessed I am able to experience it,” Tatiana said. “People get married, people fall in love, but to have that altruistic just love, love, love, it’s a beautiful thing.”