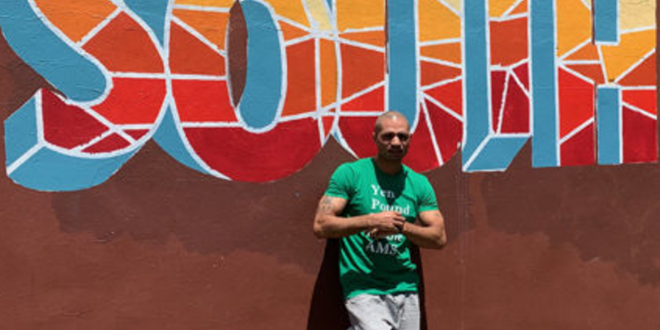 Did you hear the one about the Syracuse guy who couldn’t keep his grades up so he lost his college football scholarship and wound up working the graveyard shift at Tops for eight bucks an hour? Now you can watch him doing  his stand-up routine on the Comedy Channel with Kevin Hart.

Actually, that’s no joke, although if the scenario sounds far-fetched, you’re excused. Travis Blunt’s journey to this big breakthrough moment doesn’t feel real even to him at times.

“I’m extremely excited and humbled,” he says, texting me a photo of the ticket he used to see Kevin Hart at the War Memorial. It’s, like, the impossible. I was in the fourth row watching this show when it came through Syracuse. Fast forward a few years and now I’ve done a show with him.”

Travis, 42, a county custodian by day, survived a challenging audition process in Rochester to win a spot on “Hart of the City,” Kevin Hart’s roving nationwide search for rising comedians. His bit, which will air at 11 p.m. Friday, June 28, taped last summer, but the process of becoming a comedian began eight years before, under less-than-hilarious circumstances.

The 1996 Corcoran High School grad was walking home in the dark from Tops after his shift ended early. He was unhappy to the point of slipping into depression. He carried a burden of letting people down by not fulfilling his gridiron promise, having squandering a full ride at the University of Buffalo after transferring from the University of Virginia. It wasn’t that he was dumb. He knew how to study. The problem was he hadn’t been willing to study anything except playbooks and opposing offenses.

Now he way paying for it. A series of crummy jobs and a discharge from the Air Force for smoking dope had led to the pride of the Corcoran Cougars, an All-State safety, stocking grocery store shelves, living with his mom and wondering what the hell had gone wrong.

God didn’t put me on this Earth to do this, he remembers thinking.

It was about 5 a.m. by the time he got home that fateful morning. He turned on the TV and started watching the Comedy Channel. Something clicked. Loudly. He recalls thinking: That’s it. I’ve always made people laugh. I’m going to try comedy!

Travis shared the big news with a friend. The friend wasn’t as enthusiastic.

A star was born.

Undaunted by his friend’s reaction and his own skittishness about public speaking, Travis availed himself of Open Mike Night at the now-defunct Wise Guys comedy club in Syracuse. Those first five minutes felt like an hour, he recalls during an interview in Armory Square. But he got laughs, especially when he played off his biracial background. His father, Arthur Blount is black, his mother, Cathy Crump, is white. The biggest laugh came when he predicted that he would have fared poorly as a runaway slave because of his conflicted identity.

“I would have felt guilty and turned myself in,” he said.

Travis was hooked. He kept working on his material and won a competition at Syracuse University (he was the only non-student to compete) that earned him a chance to open for comedy legend Damon Wayans in Goldstein Auditorium at the Schine Student Center. This time it was 10 minutes on stage — an eternity.

“I shouldn’t have been up there,” Travis said, well, bluntly.

Afterwards, he asked his sister Tina how he did. “She never really gave me an answer,” he recalled.

If his comedy wasn’t always pretty early on, he had a secret asset during that formative time — the positive habits he’d picked up playing the sport he loved. In a fiercely competitive, unforgiving endeavor such as stand-up comedy, everyone need’s an edge. For Travis, it was the discipline, diligence and attention to detail he’d learned playing football. When you’ve suffered through two-a-day practices and banged heads with D-1 behemoths, it takes more than a few hecklers to derail your dream. It didn’t hurt that he played in the defensive backfield, where getting beat is inevitable and a short memory a must.

“Football taught me you can’t quit,” he said.

Sometimes even when it’s in your interest to do so. Against his better judgment, Travis continued to seek even unpaid opportunities to play football until finally, at age 31, he injured his achilles during a routine drill with the Syracuse Strong semipro club.

“I felt like I fell in a hole,” he recalled. “I started crying. I was saying what am I doing with my life?”

To force himself to break his football addiction, he opted not to get the tendon repaired and started looking for another outlet for all that energy and passion. Easier said than done, but once he committed to comedy, timing was on his side. After cutting his comedic teeth at Wise Guys, Travis benefited from the opening of  Funny Bone comedy club at Destiny USA, which brought in bigger, better acts.

It also brought love — he met his girlfriend, Ocesa Keaton there in 2012 — and then, less romantically, a three-year ban from the club for sneaking friends into a show. Not one of his smarter moves, he concedes, although he adds impishly:  “They still bought food and drinks.”

His style developed. Frenetic. Quirky. Observational. And relatively clean. He doesn’t scrub his act of the N-word or F-bombs, but he calls on them judiciously, aware that when they’re overused their impact is diminished. His unusual life experiences have bequeathed him a wide and unpredictable comedic pallet. If his riff on a drug sniffing dog’s apathy toward a man concealing low-quality weed doesn’t make you laugh, chances are not much will.

Now he’s a regular on the road, having played the Cleveland and Baltimore comedy festivals as well as many others. He has shared the stage with some big names in stand-up: Lavell Crawford, Kevin Nealon and Tony Rock. He’s on his way, but unlike the cocky safety at Corcoran, he understands he’s not there yet.