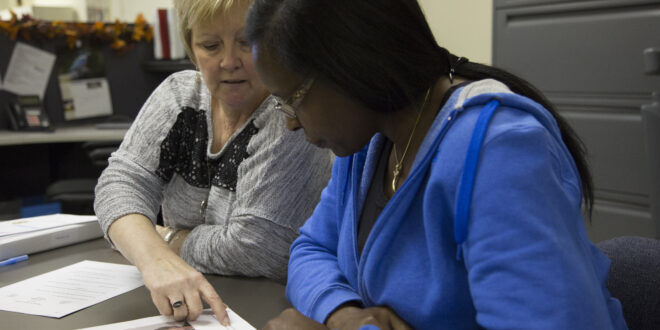 Marsha Tait, executive director of LiteracyCNY, listens as Theresa Holden, a student with the agency, reads aloud in 2016 during the pair's weekly tutoring session. | File Photo

LiteracyCNY Set to Close this Week

Lawmakers are scrambling to save LiteracyCNY after the state denied critical funds to the nationally acclaimed program, forcing it to suspend operations effective this week.

The 62-year-old organization, which served about 350 learners pre-Covid restrictions, was launched by Ruth Colvin, now 103. She was awarded the Medal of Freedom in 2006 by President George W. Bush and still serves on the agency’s board of directors.

Colvin abstained from the Oct. 20 board vote to shut down.

“I abstained because it was such a surprise to me,” Colvin explained adding she hopes the organization can return to its all-volunteer roots. Following a Sunday morning of golf, she spoke of the importance of being adaptable in hard times and expressed confidence that the organization or something similar will chart a new path forward.

“I think the staff should go, and we can work things out somehow else,” she said.

At least for now, however, the race is on to save the three staff jobs and two teaching positions.

“It’s devastating to me, to our team and to our volunteers, but most importantly, it takes  away a service to our most vulnerable population,” said Marsha Tait, executive director of the center at 100 New St.

The closing was prompted by the state Department of Education — LiteracyCNY’s biggest customer —  refusing to pay about $40,000 in grants and reimbursements owed the program, plus its failure to commit to refunding a critical 5-year grant worth up to $158,000 per year.

With no assurance of a renewed funding stream, the board’s ability to borrow through what might otherwise have been a short-term pandemic-induced shortfall was curtailed.

Calls to the education department went unreturned. A woman there who answered the phone said Deputy Commissioner Kevin Smith, whose office oversees adult literacy initiatives, was retired, although that was not confirmed.

In past months, communication between LiteracyCNY officials and the education department have degraded from strained to non-existent.

“No one at the state Department of Education will tell us anything,” William Kriesel, board president, told The Stand.

In a letter that organization leaders said was emailed to Smith, Kriesel accused the department of killing LiteracyCNY to cover up a clerical error that occurred when the program was incorrectly scored as less-than-proficient in glaring contrast to recent years.

“In attempting to avoid admitting the presumably inadvertent error, you did not properly restore our funding, leading directly to the termination of one of the best performing literacy organizations in NYS and the founding volunteer literacy organization in the United States,” the email stated.

Kriesel acknowledged he has no proof of a coverup.

When asked to provide The Stand with correspondence from the state pertaining to LiteracyCNY’s low rating, he said,  “I don’t think we want to be releasing those kinds of documents.”

LiteracyCNY is far from the only not-for-profit organization to succumb to the virus. Thousands of programs face shortfalls or worse due to shrinking revenues and the impasse on a federal relief package. If there’s hope for LiteracyCNY, it might rest in the exalted status of Colvin, a National Women’s Hall of Fame inductee.

State Assemblymen Al Stirpe and Bill Magnarelli and Sen. Rachel May have been lobbying to save the program in recent days.

“When you have a successful program — a national model — at the center of adult literacy in the U.S. right here, and it has has a Presidential Medal of Honor winner …  that’s  probably something you should not let die,” Stirpe said, adding that many Albany power-brokers don’t know the historical significance of LiteracyCNY.

Colvin founded Literacy Volunteers of Greater Syracuse in 1961 and then Literacy Volunteers of America, which promoted her teaching approach and helped establish a nationwide network of volunteer programs. LiteracyCNY is the descendent of the original organization.  Perhaps it’s also a roadmap back to the future. Some board members, including Colvin, are already exploring ways to restart LiteracyCNY as an all-volunteer literacy program.

Colvin said the classroom instruction LiteracyCNY has been providing has its place, but other agencies provide it as well. On the other hand, one-on-one volunteer tutor/student relationships build friendships, break down  racial and cultural barriers and generate innumerable benefits beyond learning English.

“I’m hoping we might be able to do that more,” Colvin said.

However it’s done, teaching adults to read matters. An estimated 60,000 residents of Onondaga County — and 54 percent nationwide—cannot read above a sixth-grade level. Experts say those numbers drag down the economy by keeping people unemployed or in low-wage jobs and making them reliant on government help to survive.

“These are the people who most need our services,” said LiteracyCNY volunteer Linda Church. “We are not supporting them the way we need to.”