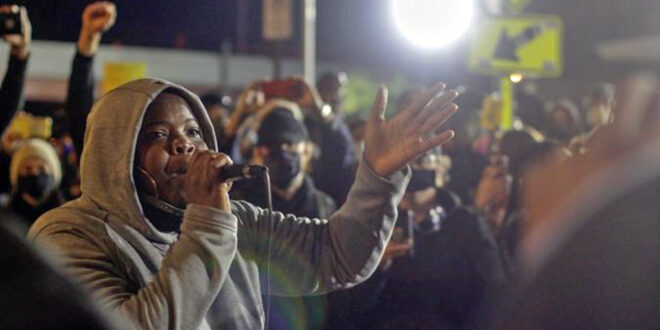 ROCHESTER — The sound of chanting, singing, drums and horns echoed through downtown streets Friday as protests began for the 10th consecutive night.

The protests drew hundreds of people, who marched from Dr. Martin Luther King, Jr. Memorial Park to the Public Safety Building to demand justice for Daniel Prude, a Black man who died in Rochester Police custody following a mental health call in March.

Some even came from Central New York to show support. Syracuse resident Michele Lindor was one of the organizers of Last Chance for Change, a local activist group that led protests for 40 consecutive days and nights. Lindor said Last Chance for Change has had a representative at the Rochester protests every night.

“I came down last weekend when everything started going crazy,” Lindor said. “I honestly just felt like I had to, and I am representing Last Chance for Change in solidarity with all of the groups out here.”

Following the 40 days of protests, Last Chance for Change has sustained its community engagement with service events three times a week culminating in more than 100 days of community action since the group assembled in the wake of the murder of George Floyd in May.

At the beginning of Friday evening, at approximately 7:30 p.m., organizers spoke to a crowd of nearly 500 people, reiterating their demands of Mayor Lovely Warren and District Attorney Sandra Doorley to resign. They also called for the passage of Daniel’s Law, which would establish a mental health task force trained with de-escalation tactics to answer distress calls. According to news reports, by Sunday protesters moved to Doorley’s office and demanded her resignation — along with Rochester’s mayor and Police Union President Mike Mazzeo. Doorley’s office responded releasing a statement saying she has no intention of resigning.

Friday night’s crowd was smaller than nights prior — compared to the approximately 1,500 attendees the previous weekend — but despite the dwindling numbers, protesters’ spirits remained high.

While the crowds marched through Rochester around 9:30 p.m., cyclists rode ahead to create traffic barricades to ensure safe passage for the marchers across busy streets. As they crossed South Clinton Avenue, cars honked and a brigade of motorcyclists revved their engines in possible support or threat to the passing crowd. Passengers in one stopped car climbed out the car windows with cheers and raised fists.

When they arrived at the Public Safety Building that evening — where more than 50 police officers in riot gear stood guarding the entrance and surrounding the plaza, accompanied by surveilling drones — organizers continued to sing, recite poems, and speak about personal experiences.

Organizer and local musician Danielle Ponder made a biblical analogy calling the police a Goliath with “a whole propaganda machine … saying that they are saving our community.”

“Stay strong, because we are shifting the paradigm. We have the courage of David when David took down Goliath,” Ponder said. “Remember everyone, every nay-sayer, will come behind you … because they know day after day you are taking down Goliath and they never knew it could happen.”

Haleigh Kirk, a Rochester resident and aspiring mental health professional, has attended the protests every night. Kirk says she felt an immense connection to the community as a result of these marches.

“The best way I can describe it is as oneness and unity, it has been very empowering,” Kirk said. “I feel way more protected by my peers than our police.”

This story is republished with permission by TheNewsHouse.com, a multimedia news site for Syracuse University to teach Newhouse School students practical digital skills needed for the media industry