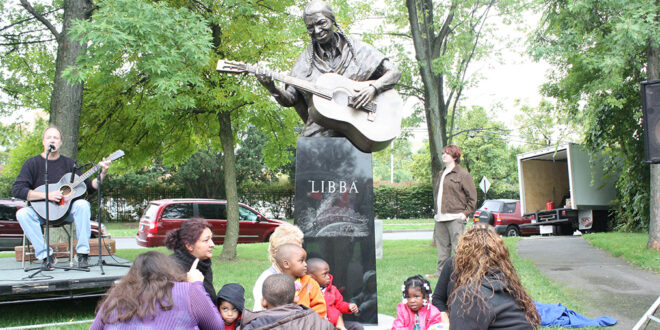 The late Elizabeth “Libba” Cotten continues to leave her mark

To be considered “Master of American Folk Music” by the Smithsonian Folkways Recording website is an accomplishment itself. Yet, for the late great Elizabeth “Libba” Cotten, such a nickname purely summarizes the powerful impact she had in her career of music. Prior to taking her final breath inside the confines of Syracuse, the late great Black heroine of folk music transformed the genre almost overnight with her lyricism and revolutionary guitar playing.

Born in Chapel Hill, North Carolina, during 1895, Cotten taught herself how to play the banjo and guitar while growing up. She utilized her brother’s instruments when he was away, and during those times learned how to reverse the banjo and guitar into a position where playing left-handed was feasible. Once she was able to save $3.75 to buy a Stella guitar of her own, Cotten quickly developed a new guitar style. It consisted of simple figures played on the guitar’s bass strings to counteract the melody played on the instrument’s treble strings. Such an innovated method would eventually adopt the name “Cotten Style.”

Robert Searing, curator of history at the Onondaga Historical Association, spoke on the utter ease and grace Cotten possessed when it came to performing.

“Her style as a player is so clean and so methodical that it really is astonishing,” Searing said. “It’s almost savant like. If you look at her early videos you can see it coming through her like one of the greats.”

At 15, Cotten was married and slowly began to adopt the family customs of a churchgoing housewife. The more time she spent at the church, the less she played guitar. Only on special churchgoing occasions would the instrument be played by her fingers. It took a stretch of 25 years until, by luck, Cotten was able to finally have her musical talent recognized and levied into a professional career.  While working at a department store in Washington, D.C., Cotten returned a misplaced Peggy Seeger to the renowned folk-singing Seeger family. From there, she was given the chance to work for the Seegers, and in due time, her musical prowess was discovered.

In the Seeger home where she worked, Cotten had unknown access to Ruth Crawford Seager, a known musical composer at the time. Then there was Ruth’s husband, Charles, who was a historical pioneer of ethnomusicology. With the discovery of Cotten’s guitar talents from Ruth’s daughter, Peggy, the Seeger family learned about Cotten’s abilities and soon began to document and appreciate the musical prowess of their helpful maid.

By 1958, Cotten had produced her first album with the help of Ruth Seeger recording her music. “Freight Train and other North Carolina Folk Songs” was a revolutionary album in the way the banjo and guitar was played on the various tracks. Cotten played two distinct styles on the banjo and four distinct styles on the guitar by adding a single string melody, which was heard prominently in “Freight Train.”

Cotten was instrumental in the folk music resurgence during the ’60s, and by the 1970s, she finally began receiving respect and admiration for her talents. She was awarded the National Folk 1972 Burls Ives Award for her contribution in American Folk Music. Syracuse, the place she spent the last years of her life, honored her with her own park, Libba Cotton Grove, in 1983. One of her most memorable honors was being incorporated within the book “I Dream a World: Portraits of Black Women Who Changed America” by Brian Lanker. The book associated the legacy of Cotten with the likes of civil rights activist Rosa Parks and poet Maya Angelou.

Searing attested to the importance of localizing Cotten’s impact and legacy within the Syracuse area. The level of appreciation and acceptance for what she meant to the region couldn’t be ignored. While she was a world-wide star whose imprint within folk music went unmatched, in the Central New York area, she was the community’s bundle of success.

“She was named a living legend in Syracuse,” Searing said. “When she finally received her Grammy award in 1985, obviously that was an incredible point of pride for the local community. When the word was out that somebody living in the 315 won a Grammy, it was quite a moment. The fact that this meek, little old woman had the power to change music and was an Icon of American music across the globe, it was an incredible point of pride for people in Syracuse.”

Her musical legacy has lasted beyond her existence through many musicians commemorating her work in renditions. Bob Dylan played Cotten’s popular “Shake Sugaree,” and her classic “Freight Train” became a well-appreciated and highly played tune by Taj Mahal and even Peter, Paul and Mary. These occasions help perfectly highlight the generational impact Cotten made beyond the folk music pocket.