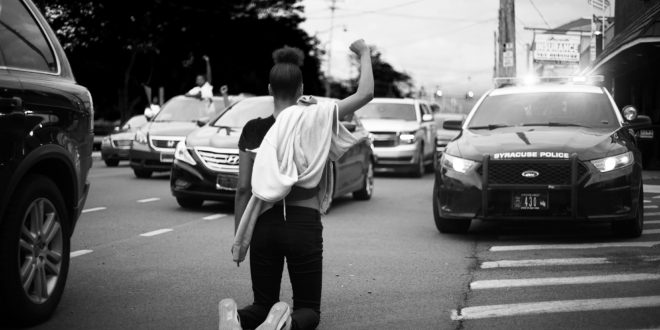 In Syracuse, protests have continued since May 30. Images like this one by Cherilyn Beckles can be viewed on the Everson Museum of Art as part of the Urban Video Project's outdoor architectural projection.

This great nation under one beautiful law sometimes reminds me of a dog startled by one of its own farts. The dog wheels around but can’t comprehend what  happened much less why. Then it shrugs off  the perturbation and moves on — until the next time.

So here we go again, frantically searching for the source of our self-generated flatulence.

Is it the extreme Right?  The extreme Left? The Anarchists? The media?

What pray tell could it be?

Excuse me if I sound jaded, but I have my reasons. Twenty-eight years ago an African-American man still recovering from a savage police beating in the city where I lived asked a simple question: “Can’t we all just get along?” Now we have a definitive  answer: Hell no. It doesn’t matter how often we get zapped by the electric fence of social injustice, we keep going back for more. You can see the current arcing through Jim Crow. Richard Nixon’s race-baiting  “Southern Strategy,” George Bush’s Willie Horton dog whistle, Bill Clinton’s morally debased “welfare reform,” a jury’s acquittal of  LA cops who took batting practice on Rodney King and the chronic inequality meted out by skin color. America doesn’t just touch the Third Rail of racial politics; We drape ourselves on it. Ever in search of still more collective agony, we cranked the voltage even higher by splicing together a coalition of dumbasses and non-voters to elect our first modern Hater-in-Chief.

What’s wrong with us? No, seriously. Even dogs have better memories when it comes to chronic negative reinforcement.

Time for full disclosure: I was shot in something called  the LA Riots 28 years ago while on assignment for the Boston Globe.  I had just turned 30. That makes me old but not that old  Yet the .38 caliber slug  still lodged in my chest may as well be a Revolutionary War musket ball buried in the muck of Boston Harbor. It’s not an injury, it’s an artifact. When I need a chest X-ray because of a respiratory infection, sometimes a technician will ask about the foreign body nestled against a rib.

“Do you know about the Rodney King riots?” I’ll ask. It’s not unusual to get a blank stare. You’d think I was referencing the Insurrection Act of 1807.

Feel free to Google the particulars of my really bad night of April 29, 1992. For our purposes here, all you need to know is that my misfortune was a tiny incident in a spasm of violence that left 63 dead and 2,400 injured. I was shot by Black people, saved by Black people and, in accordance with the national media script, assigned the part of the grateful White guy vouching for the law-abiding nature of the “vast majority” of Black people. Nowadays we call this reverse racism.

I didn’t learn much from the experience beyond what most of you already know. People deserve to be judged by their words and actions, not by race or ethnicity. Civilized society hangs on a tacit agreement to “just get along”, not on documents written with quill and ink two centuries before. Sorry if you’re looking for more penetrating insight, that’s all I got, folks.

Months after I had recovered from my injuries — I took three bullets total but suffered no lasting ill effects — I was paid a visit by acclaimed actor, playwright and scholar Anna Deavere Smith who was harvesting first-person accounts of survivors for her one-woman show on the riots. I didn’t make the cut. I was already too emotionally removed from the shooting to offer anything of dramatic value. I was just a reporter who had been doing his job, driven down the wrong street at the wrong time and was lucky to be alive. For a few terrible hours, it had been a liability to be a White man, which ironically had given me a better sense of what it must be like to be a Black man. And now it was time to move on and get back to the business of being a White guy building his resume. I spent most of the rest of my career doing what I’d done in the years before the riots — writing a humor column. Talk about White privilege.

This week I’ve been getting a lot of well-well-intentioned texts from old friends asking how I’m doing and whether any of the current unrest is bringing back memories. Of course it is, even though the energy is so different now than in ’92.  This time the faces of rage are represented by all the colors of the rainbow.  That’s a good thing, I guess. My two teenage daughters are bringing it full circle, attending local protests.

But  tear gas still stings and cars set on fire still explode with the same sickening thud. Merchants still weep before looted storefronts. The same fear that filled my belly as I lay in a hospital bed watching the conflagration on TV has returned as it must because the injustices never left.  In Syracuse, my home for the past 17 years, nearly 80 percent of marijuana arrests in a recent year were of  Black men. Small wonder the windows of the Public Safety Building were broken the other night. Almost three decades after LA, a span that has carried me from a young man to a man who gets senior discounts without asking for them, America still can’t solve the riddle of how to humanely police its cities let alone fathom that those odiferous, menacing rumblings spew from its own rotting innards.