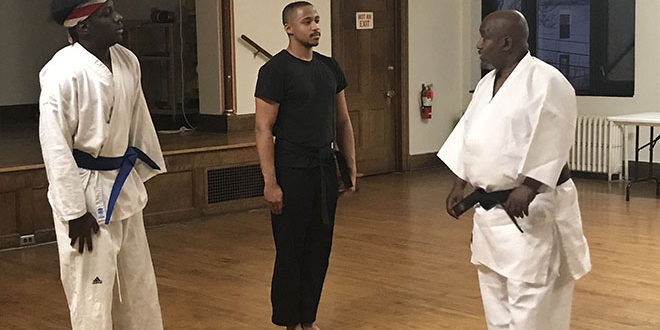 Karate Master Looks to the Future

Karate Master Roland Sims said he is bringing his sport — long on discipline and mental concentration — back to Syracuse’s South Side.

“I’m trying to re-grow it, right now,” said Sims, 49, on local interest in the ancient sport. “But it’s hard because it’s the wintertime. In the summertime, all you got to do is jog around in your uniform and people will join in.”

Still, Sims said he will not be deterred by the weather. On a recent weeknight at Beauchamp Branch Library, Sims held a demonstration for local children and their parents, showing off the skills acquired by his older students. Feet flying, faces fixed in concentration, the students used rapid-fire kicks to smash 15 wooden planks in half. Before the demonstration ended, Sims treated his audience to a brief sparring exhibition, as pairs of his students practiced quick swings with their hands and feet, moves that highlight the discipline and focus that karate demands.

Karate’s belt grading starts at a white belt (for beginners) all the way up to black belts, who are those deemed suitable to teach. Sims started at age 4 to help burn off some aggressive energy and earned his black belt by 16.

Sims recently found a building just two blocks away from the Beauchamp library that he said could work as a studio. In the interview, Sims also spoke of a wider social vision for his work in the neighborhood. “I’m just trying to get these kids off the street and give them something to do,” he said.

Sims said he used to teach karate to anyone in Syracuse who showed interest. That included elementary school students, high schoolers, young adults and older people. They all flocked to Sims’ instruction. Now, he says he performs free demonstrations at local to re-build awareness. His son, Bishop Sims, joins him and so does his childhood friend, Doneek Hough.

“I’ve been out of karate for a little while,” said Hough, who is now 23, but earned his black belt when he was 18. “As soon as Master Sims called me and told me he was doing this event for younger people and trying to get more of the community involved, I was excited to jump in and get some of the rust off.” 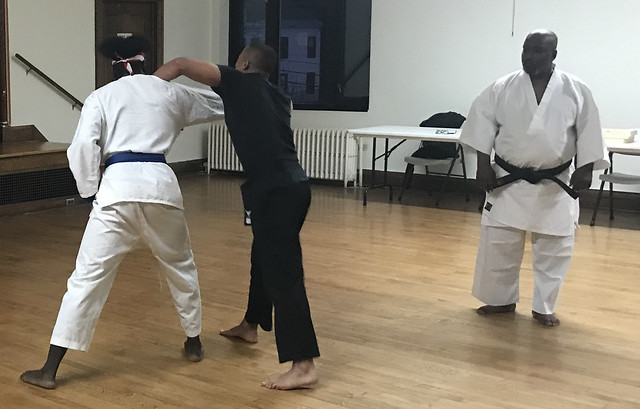 Master Sims oversees the moves of his students during a February karate demonstration held at Beauchamp Branch Library for local youth.

Bishop Sims, who now stands taller than Hough despite being five years younger, said that he hadn’t been training much recently, but it felt good to both work on his punching and kicking again while also sparring a bit with Hough at the end of the session.

“It’s tough, since he’s my father,” Bishop Sims said of having his father as his teacher. “He’s been pretty hard on me. We don’t take a ton of breaks, but I do love it.”

Bishop Sims recently earned his blue belt and hopes to work his way up to first a brown, and finally a black belt so he’s able to be a teacher like Hough and his father.

Master Sims first took up karate when he was 4. He had short temper, and his mother thought karate would be an effective way to help manage his anger while also teaching discipline and focus.

“My mother was my first teacher and that’s when I fell in love with it,” Sims said. “When she couldn’t teach me anymore, I went and found another instructor. It’s the only thing I was happy doing.”

As he climbed the ranks, Sims said he traveled the country for karate tournaments.

“I went as far as Hawaii, and I won there, too,” Sims said with a smile.

Now, he works to pass along his love of mixed martial arts to the Syracuse community and give young people an outlet to channel frustration and hone their discipline and focus.

For Jack Price, a sophomore at Syracuse University who worked his way up to a blue belt before coming from California for college, the dojo he attended provided a perfect place to manage his anger and focus on improving his discipline.

“Growing up, it was awesome having a master who actually cared about not just me as a mixed martial artist, but me as a person,” Price said. “Karate really breeds a positive, healthy mentality, and I’d encourage any kid, especially those with anger of discipline issues to at least give it a look.”

Sims said he prides himself on knowing each student as if he or she was his own child. He says it’s not enough to just know them as fighters, but also as human beings.

“A teacher is like a psychologist,” Sims said. “You have to know who is who and how to talk to them. You can’t always yell. They’ll go into a shell and you don’t want to make them feel like they can’t talk to you.”

Now that he’s back in Syracuse, Sims is trying to make an impactful difference to any young person interested in training with him.

“I try to find and lead respectable people in the community,” Sims said. “I know I raise these kids well. I treat it like raising my own child – only there’s like 40 of them at once.”

— Article and photos by Jack Henkels, The Stand staff reporter