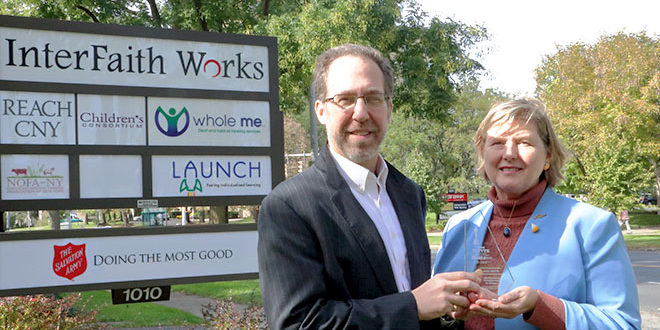 Nonprofit recognized for efforts to spark communication between community, police

InterFaith Works of Central New York’s El-Hindi Center for Dialogue was honored last month in Washington, D.C., as a winner of the 2018 American Civic Collaboration awards, or Civvys. The center tied for first in the local category and was noted for its work in a variety of programs, most notably the Police-Community Dialogues, an initiative bridging the gap in understanding between the Syracuse Police Department and local community.

The award hosts praised the dialogue initiative for having an immediate and lasting impact that presents a model for other communities to follow. Civvys judge Michele Holt-Shannon, pointed out how “the use of multiracial, multilingual facilitators expands the impact of the dialogues.”

Finalists were evaluated by a committee of reviewers including The Kettering Foundation, Bipartisan Policy Center, Converge and Democracy Fund.

InterFaith Works President and CEO Beth Broadway, who accepted the honor at the awards ceremony with Center for Dialogue Director Peter Willner, said the agency was honored to receive the award from its peers in democracy building.

“Our work in leading deliberative dialogue for four decades has given our community and the people of our region the opportunity to find common ground in polarizing times,” Broadway said.

“Our work to build trusting relationships among diverse groups of people in many different settings across our community has never been more needed,” Willner added. “Meeting colleagues from across the nation in DC had been energizing and inspiring. We thank our community partners here in Central New York who share this award with us.”

The El-Hindi Center for Dialogue also sponsors the Community-Wide Dialogue to End Racism (the longest-running dialogue program of its kind in the nation), supports the Syracuse Chapter of the Seeds of Peace program, run the annual Duck Race to End Racism and oversees the Starting Small school exchange dialogue program. The center was established in 2012 through a gift from the Ahmad and Elizabeth El-Hindi Foundation to serve as a regional hub for constructive community engagement.