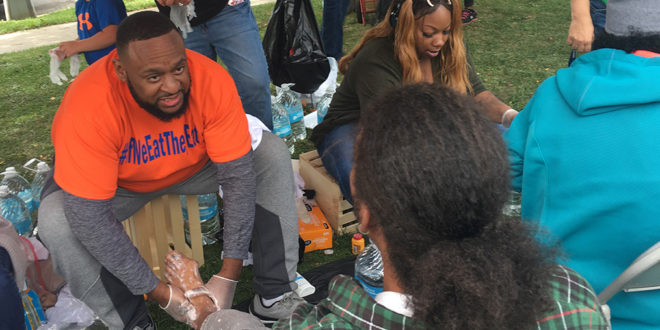 How We Rise Above the Streets has grown in service

One weekend while serving sandwiches to Syracuse’s homeless, Al-amin Muhammad ended up in the emergency room with frostbite on his hand. He wasn’t upset about it, though. He loves the work he does. Whether it’s 70 degrees or 17 degrees, each Saturday you’ll find Muhammad directing We Rise Above the Streets “Sandwich Saturday” food handout at Lincoln Middle School.

Muhammad started We Rise Above the Streets about three years ago and has only missed one Sandwich Saturday since. The event attracts anywhere from 200 to 575 people each week, and the organization often receives more donations than it can handle. Muhammad and We Rise have appeared on CBS This Morning and received shootouts from Jay Z’s Rock Nation and rapper Meek Mill. Mayor Ben Walsh even declared March 18, 2018 to be Al-amin Muhammad Day and presented him with the Rubenstein Justice Award.

But life was not always this good for Muhammad.

Growing up in the South Side of Chicago, Muhammad had a rough upbringing. He joined a gang at 13 and was incarcerated multiple times. In an attempt to start fresh, Muhammad moved to Atlanta and worked a job at a factory but was laid off after a few months. He found himself back on the streets selling drugs to make ends meet and ended up in prison after one of his “friends,” who was an informant, turned him in. While in prison, Muhammad converted to Islam and vowed never to get involved in crime again. He was released a little over a year into his 10-year sentence. But without a job or a place to stay, Muhammad had no option but to sleep on the streets and eat out of garbage cans. In a last-ditch effort to turn his life around, Muhammad tried to get a spot at a detox center but was denied for weeks. He felt like there were no options left.

“I was going to end my life,” Muhammad said. “I knew what I was going to do. I had everything planned.” Just as he was on his way to go end his life, a car pulled up and a man offered Muhammad a spot at the center. There he got clean and found the support he needed to get back on his feet. Muhammad would go on to complete his associate degree and started learning about nonprofit management.

It was during this time that Muhammad learned one of his most valuable lessons— “power of the community.” He spent the next five years working with a nonprofit called Open Door Community where he served the homeless and engaged in protests against police brutality toward African Americans. “I had a Ph.D. in the streets and another Ph.D. about how to bring the community together after learning from them people,” Muhammad said.

With these skills, Muhammad would start We Rise Above the Streets in Syracuse where he quickly developed a strong following. Sandwich Saturdays started with 15 people, then 25, then 60, then 100 and eventually 575.

We Rise gained some of this traction after a profile done by The Stand in 2016 led to a surge of media coverage. Eventually, Muhammad’s story gained the attention of CBS leading to We Rise receiving national exposure. Though, it’s the South Side coverage he credits with first drawing the attention:

“It really started from The Stand,” Muhammad said. “To me, in my heart, it opened the doors to everything else.” Muhammad hopes that by sharing his life with The Stand that young people will be motivated by his story and see that self-betterment is possible. He welcomes young people across Syracuse and the South Side to get involved with We Rise. Right now, a majority of We Rise’s volunteers are Caucasian and from privileged backgrounds. Muhammad hopes to bring greater diversity to the organization.