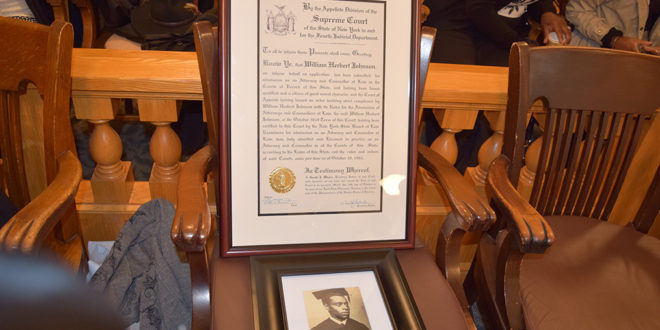 William Herbert Johnson, the first Black graduate of Syracuse University College of Law, despite being class valedictorian and passing the New York Bar Exam, was denied admission to the New York bar in 1903 due to his race. Sixty years later, Dr. Martin Luther King Jr. wrote in his famous “Letter from Birmingham Jail” that “justice too long delayed is justice denied.”

On Oct. 18, the Supreme Court Appellate Division of the State of New York posthumously admitted Johnson to the New York bar during a special ceremony held in the Onondaga County Courthouse, in an effort to correct this long-standing injustice.

“A moment like this stands out in the magnitude of its meaning not only to an individual or even a family, but to a people, a community and a generation,” exclaimed Professor Paula Johnson of the College of Law, one of the organizers of the effort to admit Johnson to the bar. “This individual certificate is not just an individual triumph. It is a testament to the fortitude, perseverance and belief of a family, a community and a people,” she added.

“This is a very exciting moment. It’s been a long time coming,” said Calvin Johnson, the oldest living grandson of William Herbert Johnson. “My grandfather was never a man to express his disappointment or his regrets about not being accepted as a lawyer. … He just rolled with the punches and continued to be a man.”

Mayor Ben Walsh shared a story about Johnson’s legacy of kindness, giving and exemplary service to the community.

He also helped people interested in working for the city study for the civil service exams. Although William Herbert Johnson was a small man in stature, standing at 5’3” and weighing a mere 120 pounds, he gained a big reputation for his ability and achievement, according to those sharing memories of Johnson.

The Johnson family also opened their home to many Black students who needed respite from the racism they experienced on campus.

“Whether you were a student or whatever, you ended on the porch of 618 East Washington or the parlor of 618 when it was inclement weather,” Calvin Johnson recalled. “We helped many people of color, noted people of color, in this community get the things they needed.”

William Herbert Johnson often worked small jobs outside the practice of law to support his family. Although he wasn’t admitted into the bar, white lawyers sought his advice on legal matters behind closed doors. He was highly regarded by everyone in the community for his brilliance, depth of character and goodness.

“He was our lawyer regardless of whether he was appointed by the bar or not,” said Van Robinson, former president of the Syracuse Common Council. “This is such a memorial event. Who could have imagined: 1903 to 2019 before being recognized as a member of the bar?”

After 116 years, the time had finally arrived to bestow the honor and admission of William Herbert Johnson to the bar. Mark Bennett, clerk of the court, read the certificate of admission after which the Hon. Gerald J. Whalen, presiding justice, signed it.

The Johnson family was presented a framed copy of the application with the original signatures of the five justices to serve as a reminder of William Herbert Johnson’s greatness and determination.

“Today is a huge day for our family. One hundred and sixteen years in the making; a lot of work, a lot of tears, but a lot of pride. The journey is not over so we keep fighting, and we try to live by his example,” said Corey Mitchell, great-grandson of William Herbert Johnson, Esq.