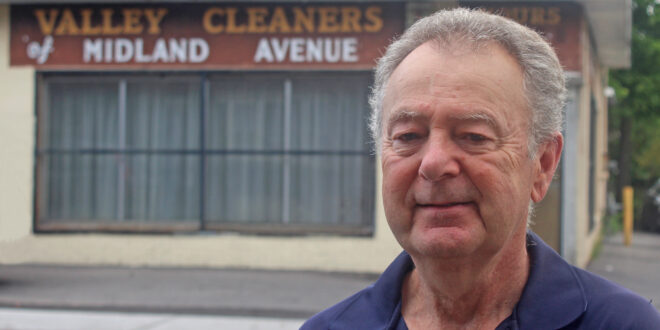 Jerald “Jerry” Sakran, a Thomas J. Corcoran High School alum, says he’ll miss the community and a job he dedicated most of his life to. | Eddie Velazquez, The Stand

In the dry cleaning business and in life, Jerald “Jerry” Sakran has learned a lot.

“If you treat people right, they’ll treat you right,” said Sakran, who owned and operated Valley Cleaners on Midland Avenue up until late June, when he officially retired.

The economic repercussions brought on by the COVID-19 pandemic, as well as the longevity of his career, nudged Sakran to retire.

“Things got tough with the pandemic and business in general,” he said. He feels for business owners — the “little guys” — all throughout the nation.

“The policies of our government are forcing businesses to close up and a lot of small businesses are getting hurt because of the pandemic,” he added. “I had (want) ads for help and couldn’t get any. No one wanted to work because they were getting checks every week.”

Working, at least in his view, is a matter of pride.

“People should want to work. You feel so much better when you work,” Sakran believes. “I am speaking for myself, but it feels good to feel good about what you are doing. The dry cleaning business is in trouble.”

Even with the difficulties small businesses and other local dry cleaners have faced, Sakran said he sees mom-and-pop enterprises as the source of innovation in the United States.

More than anything, during his time cleaning and sorting the garments worn by Syracuse residents, Sakran learned to understand the types of workloads he can manage.

“You learn things through experience,” Sakran said. “When you promise something and you learn you are not capable of (fulfilling that promise), you go, ‘We are not going to do that again.’ It is experience. You are a better person if you learn from that experience.”

Experience, he said, helped him ultimately make the decision to not take in any more orders back in April.

“I think people should know their limits,” he said. “Work got really hard. I was not physically able to do the job I wanted to do. So I had to close the store. Despite the fact that there was less work, I did not have the physical ability to do it anymore. Mentally I was pretty spent, too.”

“The people in the South Side are wonderful. In 50 years, I rarely met someone who came in with an axe to grind,” he said of the clientele that frequented his shop on the corner of West Kennedy Street and Midland Avenue.

Sakran attributed the business’ success to the community.

“Everything I have is because of the people,” he said. “Everything I do is for them, and I owe them. I would like to think I was good to them, too.”

Although Sakran is stepping away from his business, longtime clients believe he is not done helping the community.

“He is still going to find ways to contribute. That’s who he is,” said Julius Lawrence, a South Side resident.

Lawrence, who frequented Valley Cleaners often, said Sakran and his businesses were a symbol of stability in the community.

“I never asked for those things … I appreciate them all, but I feel like I just did my job,” Sakran said humbly. “If they aren’t (recognizing those who have served the community for decades) already, they should.”

Now retired, Sakran finds time to play golf with his wife and do more of what he loves: being surrounded by those closest to him.

“I’m having some good times with my kids and grandkids,” said Sakran about spending time with his four children and nine grandchildren. “Do I miss the place and the people? Of course. It wasn’t an easy decision. It was one of the most difficult ones I have made in my life.”

More so than playing golf or bowling, which Sakran described himself as decent at, it is all about the comradery shared among friends and family.

“I am a social kind of guy. I enjoy being around people and telling stories,” he noted. “Interacting with people helps someone be a better person.”

As for advice for other small business owners and people in the dry cleaning industry, Sakran recommends a good attitude mixed with state-of-the-art equipment.

“If you are going to do this, you have to have the best equipment and be focused on what you do,” he said. “Be decent to people, provide good service and price things right.”