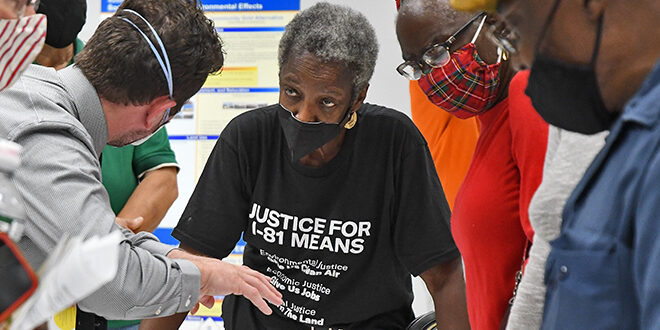 The seventh I-81 neighborhood meeting was held Sept. 9 at STEAM at Dr. King Elementary School. | Mike Greenlar, The Stand

Public comment period on project has been extended by 30 days

City residents are united in framing the $1.9 billion Interstate-81 replacement project as an opportunity to justly address inequities brought on by the initial construction of the highway’s viaduct in the 1960s.

The replacement project, planned and directed by the state and local departments of transportation for the last decade-plus, is meant to replace aging infrastructure, as well as address environmental concerns and better connect parts of Syracuse. The New York State Department of Transportation (NYSDOT) has presented three potential solutions, including a preferred community grid alternative. The grid, supported by the state and several local organizations, is meant to connect neglected city neighborhoods by demolishing the I-81 viaduct that runs parallel to Almond Street, repurposing old streets and turning them into more pedestrian friendly routes, while also providing several pedestrian traffic amenities.

The options have been discussed at length during several public comment hearings and information sessions at schools across Onondaga County throughout the summer. For some residents attending these sessions, it is imperative the state listens to concerns from residents living in areas affected by the initial construction of the viaduct, including the city’s former 15th Ward.

“The displacement of so many families was a real wrong done decades ago,” said West Side resident Martha Williams, who attended the latest I-81 replacement project information session at STEAM at Dr. King on Sept. 9. “It was racist, terrible, awful. I would love to see them right that wrong.”

Williams, who supports the community grid proposal, said a way to make things right would be to provide quality housing that is affordable and targets those displaced by construction. She would also like to see other community amenities like parks and green spaces that would make the area a desirable place to reside.

The New York Civil Liberties Union (NYCLU) has also demanded the state “protect the community that has lived in the shadow of the viaduct.” One way to achieve that, NYCLU officials have said, is by forming a land trust controlled by the residents in the area east of Martin Luther King Boulevard. Land trusts typically serve as a way to give communities democratic control over what happens with a property or a piece of land.

“The people of the South Side got a bad deal last time,” said Barry Gordon, who resides in the city’s suburbs. Gordon added he endorses the NYCLU’s demands for a land trust. “We are trying to make sure (displacement) does not happen again. We would like to see a land trust that is community driven.”

Some residents said they are taking a “wait-and-see” approach regarding the state’s ability to incorporate community feedback into the project.

“I would say that there hasn’t been enough outreach for those in the South Side as far as understanding their needs, their history and how they want to see their neighborhood impacted,” said Andrea Buckvord, a teacher at STEAM at Dr. King Elementary School who also attended Thursday’s public information session.

Buckvord, who has been living in Syracuse for the last 14 years, said she supports the community grid alternative, but that a lot more needs to be done to include South Side residents.

“The community grid is still just serving mostly the interests of businesses like the university and the hospital, and not the community,” Buckvord said, adding she still feels communities like the South Side are not being integrated into the larger city picture. “The grid is still sectioning off that South Side area from a lot of pedestrian access and (green amenities), yet it still features high speed traffic right along some neighborhoods.”

All throughout the public comment period, the proposed roundabout near the elementary school has been a top concern for city residents, community organizations, as well as the mayor, throughout the public comment period. The NYCLU has proposed the roundabout be moved south at least 600 feet away from the school in order to lessen high volume traffic in the area, as well as mitigate potential traffic accidents and health and safety issues.

Gordon said he is worried about the high asthma rates in the city and how construction could affect those suffering from the condition. He cited figures from a Community Health Assessment and Improvement Plan released by the city in 2019, which shows the city’s asthma rate at 13% of the population.

Ultimately, the project for Buckvord is about cohesion and unity.

“We have vibrant neighborhoods in our city, and we are in the process of rebuilding some others,” Buckvord said. “If we could bring that energy into being one, united Syracuse, things would be a lot better.”

The deadline to submit comments has been extended and will now be accepted until Oct. 14. All comments sent to the Federal Highway Administration (FHWA) and the New York State Department of Transportation will be reviewed, summarized and responded to in the final design report.

You may submit your comments using this electronic comment form or by emailing the NYSDOT at i81opportunities@dot.ny.gov; by sending via U.S. Mail to the addresses below; by leaving a voicemail on the project hotline, 1-855-I81-TALK (1-855-481-8255) or 315-703-4181; or by providing it verbally at the project’s public hearings. Find out more about the public hearings here.

Comments sent via U.S. Mail can be directed to either address below: