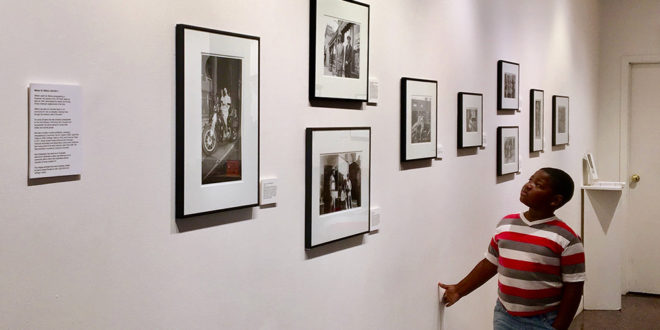 I-81 History Collides with Present Concerns

A final reception for “A Shadow Cast: Interstate 81” was held Aug. 24 to mark the closing of both the temporary exhibit and the week of corresponding events hosted at ArtRage Gallery, located in the Hawley-Green neighborhood of Syracuse.

The exhibit was a partnership between local photographer Shane Lavalette and the New York Civil Liberties Union (NYCLU).

“It was divine timing,” said Lanessa Chaplin of the joint exhibit. Chaplin, who serves as project counsel for the Central New York Chapter of the NYCLU, met Lavalette previously at a dinner event where they spoke about their respective I-81 focused projects, never knowing that only about eight months later this project would be a reality. Lavalette agrees that the timing and interest made this exhibit come together very organically.

The NYCLU and Lavalette had both reached out to ArtRage Gallery about exhibiting their work this August, and by cosmic timing or coincidence, both exhibits were focused on the issue of Interstate 81. The original construction in the 1950s divided the Syracuse community and is again in the public eye as a solution for replacing the decaying interstate is looming.

Rose Viviano, director of ArtRage, sees “A Shadow Cast: Interstate 81” as almost three exhibits in one, where the past, present and future of the neighborhood most affected by the construction of I-81 is addressed.

The past is represented by the historic photos taken by Marjory W. Wilkins, (1929-2011) a life-long Syracuse resident who documented the community around her. Lavalette curated this portion of the exhibit from the collection of Wilkins’ photographs from the 2008 Light Work Grant project, “Marjory W. Wilkins: Early Black and White Photographs.”

Artist Carrie Mae Weems speaks to the importance of Wilkins work in the project catalog, stating that: “Her mission has been to chronical what was important and essential about community and African-American life in a very particular time in Syracuse … Beyond debunking stereotypes, it is the record of a people who are proud, who are together, who are charming, who are in love, who play, who have a commitment to family … who are involved in a full and rich and meaningful life.”

On display in Lavalette’s photographs is the present state of the same neighborhoods and the residents that live in the impacted areas. Graphic in their composition and light, the photographs tell a story of a neighborhood that is many-layered, resilient and rich and beautiful in spite of the roadways that scar its landscape.

“I think I was originally hesitant to include people … but I think at some point the work I was doing was a bit more open ended and interpretive,” said Lavalette of his body of photographs. “And to have people represented in the work that obviously are individuals … but they, perhaps, are representing a community — something bigger than themselves.”

The NYCLU portion of the exhibit is an interactive digital archive of articles, photographs and other documents collected during the construction of I-81, along with a documentary addressing the impact and future of the interstate project told through interviews with community members and Chaplin. Visitors to the reception were encouraged to choose from advocacy statements concerning the future of  the I-81 project to be sent to the New York State Department of Transportation I-81 Viaduct Project.

Chaplin and Lavalette took time to address the crowd during the closing reception, each speaking about their work for this exhibit. They then opened the floor to questions. It was during this time that Chaplin was able to address concerns on how this issue is being addressed beyond the gallery walls, so that people can understand that this project is about people and families, and not only about a highway and commutes.

After the week of events that accompanied this short-term exhibit, Chaplin is most proud of the panel discussion that took place Thursday, Aug. 22. Attended by over 60 people, it hosted a robust panel consisting of Chaplin; Khalid Bey, common councilor-at-large and chair of economic development committee; Aggie Lane, with the Urban Jobs Task Force; Sally Santangelo, executive director of Central New Yor Fair Housing, and Lemir Teron, assistant professor at SUNY College of Environmental Science and Forestry.

“That’s where we kind of got into the meat and bones of the project, and why we’re doing this,” Chaplin said. “We’re trying to show that there’s a complex history, to a complex project. This isn’t an issue about transportation and it never has been.”