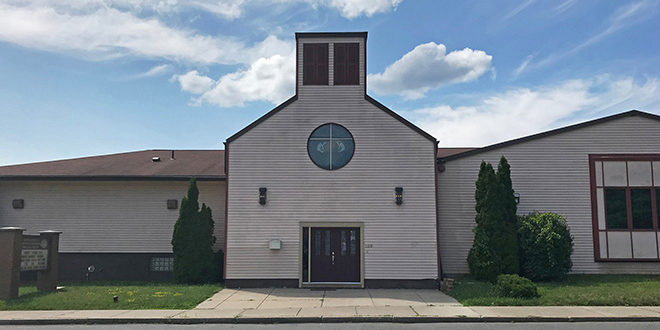 Emma Owens-Richardson often finds comfort at Hopps Memorial Christian Methodist Episcopal Church, including when her childhood home was demolished with the razing of the 15th Ward to make way for the parking garage for Upstate University Hospital.

An active member since 1980 and the current chairperson for the church’s Board of Stewards, she is not sure what other changes will come to the neighborhood now that Interstate 81 is slated to be either removed or replaced. She’s confident, though, that the church will continue to serve as a refuge for those affected by the project.

“Whatever is going to happen will happen,” Owens-Richardson said. “We will do what we have to do in order to survive.”

The determination Owens-Richardson describes can be seen every Sunday as a white-draped choir processes in under the heavy wooden ship’s hull roof of the sanctuary, just as they have done for nearly 90 years. The song has changed weekly, the choir has turned over seasonally and even the location of the service has been moved during the church’s long history, but the passion for worship and the hospitality of the congregation has remained true.

Urban renewal and the changing transportation system of Syracuse displaced the congregation many times throughout the 20th century, and threatens to do so again with the looming reconstruction of the I-81 corridor through the city. The congregation, however, is undeterred and plans to remain a beacon of hope in the community.

The Rev. Frank Hopps founded Hamlet Church in 1929 with 70 members. The church had two locations on South Townsend Street, a storefront and a small wooden chapel.

The Federal Housing Act of 1937 marked a period of urban renewal in the United States and forever changed the city, providing government subsidies to local public housing agencies to acquire and redevelop property into low-income housing. This enabled the construction of Syracuse’s Pioneer Homes, forcing the church to sell its property and move out. After a brief stint at the pastor’s residence, the church purchased a former synagogue at 707 S. McBride St. in April of 1939. In 1940, after the death of the Rev. Hopps, the church’s name was changed to Hopps Memorial CME Church by the new pastor, the Rev. W.Y. Bell.

The urban renewal projects of the mid-20th century razed an area known as the 15th Ward, displacing 27 blocks worth of residents, an almost-entirely African-American population.

Additionally, the 1956 Federal Highway Act allocated funds for the construction of Interstate 81 to run from Tennessee to Canada. The five-year construction project resulted in the demolition of more than 400 properties, including most of the low-income housing and minority-owned businesses. In 1966, the I-81 viaduct was completed, transporting commuters on a 1.4 mile elevated highway through downtown Syracuse.

The construction of I-81 and the expansion of Pioneer Homes mandated the demolition of the South McBride Street building, and the Hopps congregation sought a zoning variance to relocate the church to 1110 S. State St. in June of 1965. Hopps has remained at this location since the building’s completion in 1966, but the building has been renovated multiple times from various disasters.

Today, the congregation of the church is aging.

Board of Trustees member Terry Woodfork has been attending Hopps for nearly three decades. Throughout his membership, he has seen the congregation grow older and smaller.

“There are not as many young members coming in as there used to be in the early years,” Woodfork said. However, despite the struggle for membership and finances, the church has been able to keep going through prayers and blessings, Woodfork said.

The designed lifespan of the I-81 viaduct has come to an end, requiring a substantial reconstruction or removal project to ensure current safety standards are met. The New York State Department of Transportation has elected to install a community grid scheme to reintegrate the interstate with downtown. According to a draft of the environmental impact statement, the interstate project will require the acquisition of 136 parcels of land.

While the proposed changes to the I-81 viaduct do not currently target Hopps Memorial CME Church for demolition, its members have mixed opinions concerning the necessity and benefit of the construction project. Church administrative assistant Deborah Willis has been a member for 29 years. She says the I-81 changes will relocate some congregants, moving them farther from where they worship.

“We are in a holding pattern,” Willis said. “They might not have the transportation to get to church.” Despite the public information meetings being held throughout the city, community and congregation members do not feel they are being heard.

“We didn’t ask for it, and we don’t get a say,” Willis said. “The meetings are happening all over, but they have already made up their minds.”

New initiatives will continue to affect Hopps in the future. The project is still being reviewed by the Syracuse Housing Authority and the Allyn Foundation, but plans to demolish and rebuild Pioneer Homes, McKinney Manor and Central Village are underway in order to raise the neighborhood out of poverty.

The congregation will continue to demonstrate what the Rev. Bruce Burns calls “Hoppspitality,” welcoming visitors in among the returning members. Generational families will continue to raise their younger members in the church, such as Maxine Washington, who has attended Hopps all 21 years of her life.

“This is my family’s church,” Washington said. “You will feel welcome here.”