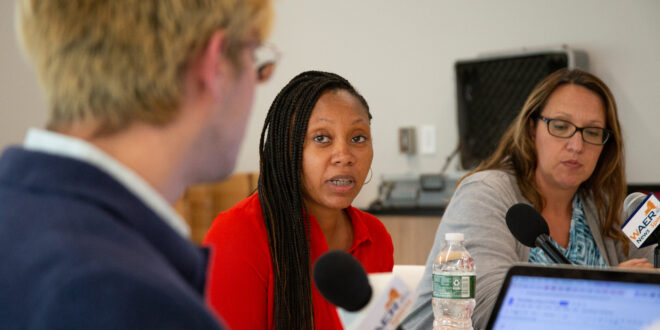 
Syracuse residents struggling to find fair and stable housing conditions have only seen those challenges magnify in the last year, according to local housing organization leaders and community advocates. These hardships merit immediate action, they say, before a significant number of city renters are met with eviction orders, brought about by the economic struggles sweeping across the United States.

In collaboration with WAER Radio, The Stand hosted a discussion with local experts on affordable housing, homeownership and community organizing in Syracuse.

In Syracuse, 61% of housing units are rented by city residents, according to 2019 U.S. Census Bureau data. Some owe several months of rent because of hardships encountered due the pandemic, which forced many low-wage workers home when hospitality and other businesses were closed or set to limited capacity by the state.

“The people impacted most in terms of housing during the pandemic are (those) impacted most by (general) inequities,” said CNY Fair Housing Executive Director Sally Santangelo, referring to people with disabilities, people of color, female heads of household and families that lack access to childcare.

Economic instability, Santangelo said, is only one of the many issues plaguing these tenants.

“The struggles people were facing with inconsistent employment or struggling with issues related to mental health have been amplified,” Satangelo said. “We see that in housing in a few different ways. People are struggling to pay rent; they’re struggling to meet the requirements of the programs that would help them.”

Stephanie Kenific, with STOP! Coalition, said she has found the bulk of the issues are concentrated in the South and North sides of the city. She has canvassed those neighborhoods for the past six months, helping tenants better learn their rights as renters and directing them to legal aid.

“Living conditions for a number of tenants on the South Side and the North Side are awful and we have many landlords — I should say slumlords — who treat housing as a form of passive income,” Kenific said. “They don’t fulfill their requirement to provide safe and quality housing, yet they are happy to collect rent from their tenants. When it comes time for them to actually do their job, they become abusive and retaliatory.”

Working through the pandemic at CNY Fair Housing, an organization that seeks to eliminate housing discrimination and promote equal access to housing opportunities in the region, Santagelo has also seen rapidly deteriorating housing conditions.

“People are facing codes and stability issues, which are a huge problem right now. Landlords have been deferring repairs and have not been keeping up with maintenance over the course of the pandemic,” Santangelo said.

These issues have only magnified problems for those with housing instability.

According to an analysis done by the Community Benchmarks program at Syracuse University’s Maxwell School of Citizenship and Public Affairs, 25% of Syracuse residents move at least once a year.

“We are facing so many issues right now that are making home homeownership even harder,” Santangelo said. “Ultimately ownership provides the best stability for families.”

Latoya Allen, the deputy director for Home HeadQuarters (HHQ), said she has seen an uptick in HHQ’s homeownership classes. These eight-hour courses, Allen explained, take the home buyers through the process of acquiring a home.

“Our homeownership classes have increased dramatically, especially in this time,” she said. “I don’t blame people because if you’ve had to deal with a terrible landlord in these moments, you definitely want to have something of your own.”

For Andrew Lunetta, the founder of A Tiny Home For Good and a longtime volunteer at homeless shelters, the pandemic has served to affirm confidence in his mission to help house military veterans and homeless city residents. Lunetta’s organization builds homes with 300 square feet of floor space and offers some of the lowest rents in the city. Currently, his nonprofit houses 28 renters in single-occupancy units in the Near West, South and North sides of the city.

“It reaffirmed my belief in our work, providing safe housing to those who, if they were left to their own devices, the only thing they could provide would be a room in a house with shared bedrooms and code violations,” he said.

Lunetta added it was difficult to feel a sense of stability at homeless shelters during the pandemic.

“When you are living 4 feet away from someone — there couldn’t be a worse time to have to live at a shelter than when there’s a pandemic going on,” Lunetta said. He added A Tiny Home for Good’s units are each individual, making them a safe location for his low-income renters during the pandemic.

From a home-building perspective, the pandemic has also made it difficult for construction companies to repair aging structures or erect new ones. “We build and manage all of our houses. Our build slowed to a halt because everything got more expensive. Contractors stopped showing up … it drove me crazy because I saw how helpful (our project) was for our current tenants,” Lunetta said.

The National Association of Home Builders estimates that, as of June, lumber prices had increased 340% over last year.

All in all, Santangelo concluded, what is out there for tenants and those seeking safe housing is not working.

“I think people aren’t being served by the systems we have in place currently. (These) aren’t adequate to meet people’s needs right now,” Santangelo said. “I think maybe those systems weren’t adequate before but it is in stark relief now.”

AVAILABLE AID
But what lifelines do struggling tenants have?

Recently, the U.S. Supreme Court sided with landlords in a case that ultimately lifted a part of the eviction moratorium in the Empire State for tenants who present the tenant hardship declaration form as opposed to providing evidence in court. There was a push by ​​New York lawmakers to extend the state’s eviction moratorium until Oct. 31 in light of the state’s failure to send out enough COVID-19 rental aid.

In terms of financial relief, Onondaga County received approximately $25 million in federal funds to aid tenants impacted by the pandemic. The county’s rent relief program can cover up to 12 months of backlogged rent and has received more than 5,000 applications.

Allen said the application process for rent relief is obtuse and unfriendly to residents who have not been enrolled in social welfare programs before.

“The process was rough,” said Allen, who tried to go through the application process to learn how to help her constituents. “Most of these people that were actually applying for the program are people that have never had government assistance before. They’re not in the system already … it was like a whole new world for them.”

Santangelo said the way the program is set up, alongside other social safety net programs, leaves people “in limbo.”

“(Rent relief) is there, and it’s held up because somebody can’t figure out how to make a functioning website in 2021,” Santangelo said. “This is baffling and frankly shameful. This is people’s housing.”

Eventually, those seeking aid fall through the cracks, Santangelo said.

“As these systems fail, it pushes people to not seek help that they’re eligible for because (residents who need help) don’t see things functioning,” Santangelo said. “We are seeing people existing outside of those systems.”

Immigrants are one of the populations who have had issues with the rent relief aid program, according to Kenific.

“When we canvass, folks with uncertain immigration status don’t even want to fill out the application for rental relief because they’re afraid of retaliation,” Kenific said.

The application for the program is typically found online and the city has partnered with 36 local organizations to help residents who request assistance.

“The federal government, every 10 years, assembles people to go door to door to do a census. Why can’t we do the same thing at the state level with the rent program?” Kenific questions. “What you have right now is a bunch of nonprofit organizations trying to visit houses, trying to get people signed up to the rent relief program, but there is no central planning.”

Since applying for aid is a joint process between both the landlord and the tenant, advocates say this highlights another hardship: navigating the tenuous relationship often found between landlord and tenant.

Allen noted some landlords could use the application as a weapon, while tenants largely lack a clear understanding of their rights as renters. “Sometimes anything tenants hear or whatever news they get from the landlord, they believe that that’s the absolute truth,” she said. “In most cases, the landlord just needs you to do something so they can collect their money.”

Allen called for better mediation between tenants and landlords. For Kenific, that is a doomed relationship.

“I don’t think it can be improved when it comes to landlords who are trying to make a profit. Making a profit entails exploiting the people you’re profiting from,” Kenific said. “From organizing these last six months, I have seen some really horrific things in Syracuse.”

Kenific referenced the recently reported situation at Ballantyne Garden Apartments, where building management publicly posted a list of tenants who owed rent for all building residents to see. The STOP! Coalition organizer said this is a glaring example of an incompatible relationship.

“I’ve seen landlords just ignore, threaten or verbally abuse their tenants,” Kenific said. “These are problems that cannot be improved because the power differential between tenants and landlords is an unsolvable thing in our current system, which is why we need a new one.”

Santangelo said a good way to balance that relationship is to create better enforcement mechanisms to hold landlords accountable. One proposal is to strengthen the city’s code enforcement system.

“I think there are ways to make it so that landlords can’t exploit their tenants, but I think the difference is: can we have a system in which landlords make a living off of being a landlord?” Santangelo asked. “That is obviously a big question in terms of the ownership of property, but I think you can have a system in which landlords or housing providers can make a living without exploiting their tenants.”

Lunetta, who has spoken extensively in the past about forging strong relationships with his tenants, said that starts with learning about the tenants’ situations. “It’s a relationship with our tenants that is built on me knowing their names, our board members knowing their names and knowing a bit of their history,” he said. “For us, the goal is not the bottom line. Our goal is to keep them in our houses for as long as possible.”

“People in poverty need to know how to get out of poverty,” Allen said. “But for most of the cases, if you have never seen it done before, then you probably don’t know how to do it. With the center, a (trained professional) will go through all of your finances and teach you how to get out of your situation.”

For Kenific, any plan for how to move forward should first acknowledge that high-quality housing is a universal right.

“I don’t care what crimes the person committed, what poor financial decision the person made or if they left their job for a bad reason. It doesn’t matter,” Kenific said. “They have a right to a place to live that is safe and sustainable. That is the starting point, and then we figure out how we house them.”