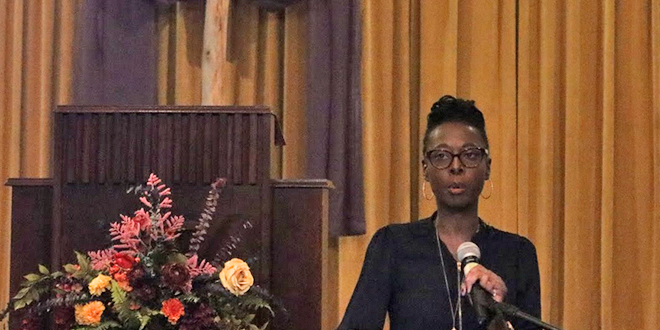 HOPE for the Future

This is what Greater Syracuse HOPE (Healing Opportunity Prosperity Empowerment) Initiative aims to do. As a coalition of local community organizations, the initiative was formed so people can help each other.

Feb. 1, Greater Syracuse HOPE Initiative held a community meeting at the Well of Hope Church on South Avenue to discuss the progress of its member organizations. Community members heard from Work Train, Let Me Be Great #44, the Syracuse Financial Empowerment Center, Together We Are Better, HOPE Rides and Community Connectors.

Founded in response to the Century Foundation’s 2015 report by Paul Jargowsky, the initiative is a part of New York Gov. Andrew Cuomo’s Empire State Poverty Reduction Initiative (ESPRI). This grant has helped the HOPE Initiative form and fund a coalition of organizations.

The report, “Architecture of Segregation: Civil Unrest, the Concentration of Poverty, and Public Policy,” named Syracuse as having the highest concentrated poverty among Blacks and Latinos. The report went on to cite that 35 percent of all families in New York state and 50 percent of all children live in poverty. The ESPRI program was announced shortly after, in which 16 cities were awarded funding by the governor, including Syracuse.

“We put out a grant form for people to apply for grants, and once we had quite a good pool of grants, we selected 11 and those are the partners that you heard from today,” said Rita Paniagua, co-chair of HOPE Initiative.

The local initiative looks beyond just facts, figures and policy, diving into the human aspect and impact issues have on residents. They work with partner organizations that share a similar philosophy.

These organizations address a variety of issues from employment to education to financial planning and transportation. Each shared updates on their aims, objectives, work and progress since March 2019 when they were awarded funding.

According to Ocesa Keaton, executive director of HOPE Initiative, the most valuable thing that they have as an organization is the trust of the community.

“I think what happens in a community that’s been disenfranchised for so long, people become skeptical and cynical,” she said. “They don’t think that their words mean anything. So in a community that has been surveyed to death, people come in, ask questions, they say we want to know your opinion and it is very important but then they disappear.”

“I think it was a challenge to gain that trust of the Syracuse community,” she continued. “They talk to surveyors all the time, but they don’t see their words going to any effect. This was something that was very important to me. I wanted to show them that their words mean something.”

Rasheada Caldwell started Let Me Be Great #44 in memory of her son Rasheed Baker, 21, who was shot on his front porch one evening. It remains one of Syracuse police’s three unsolved murders.

Let Me Be Great #44 is an organization that works with schoolchildren, especially in middle school, providing them with programs to help improve their attendance, their academics and their emotional well-being.

“Our data shows that for quarter one, the majority of our middle school children, averaged about 82.5 percent school attendance, which is excellent, because prior to the school year, they had never come close attendance-wise at the middle school level which is about 90 percent” said Dr. Naja Salaam, who works with Let Me Be Great #44.