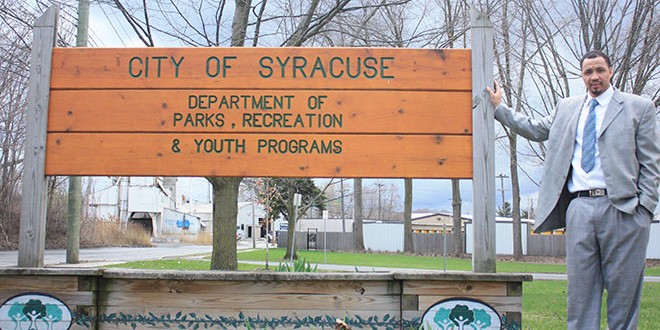 For some on the South Side, a local park is a lot more than a playground.

Syracuse has 52 parks across the city, but the South Side is home to Syracuse’s three most spacious parks, including Kirk Park. Funding and resources for the city’s parks have increased in the past five years, according to Syracuse’s budget reports. But while funding for South Side’s parks have improved, there is still a lack of engagement and involvement in the community — one the new parks commissioner hopes to bring back. 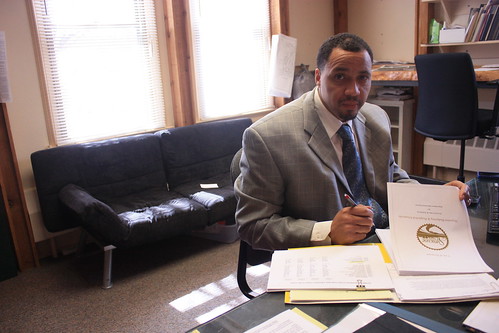 Lazarus Sims grew up two blocks away from Kirk Park, where he’d play after school. From playing basketball in Kirk Park to the Carrier Dome at Syracuse University, Sims is now Syracuse’s parks and recreation commissioner.

Lazarus Sims, the recently appointed parks commissioner and former point guard at Syracuse University’s men’s basketball team, said he wouldn’t be where he is today if not for Kirk Park. He grew up on Mark Avenue on the South Side, about two blocks away from the park.

Sims said he remembers that every day after school, he would rush home to do his homework, and then rush right back out to the park to play.

“I grew up learning and loving basketball through the parks and rec system,” he said. “We didn’t grow up a rich family, we didn’t have a lot of money, so the parks were my avenue to participate in sports.”

As a child, he learned to play basketball by practicing on the makeshift hoops on the monkey bars at the playground. The park had a three-tier ranking for basketball players, he recalled: monkey bars for the children, a separate court for up-and-comers and the big leagues court for the best players, which they called “the NBA court.”

“Probably my finest memory was to get on that so-called NBA court with all the good players,” Sims said. He remembered being very nervous that game, with the bigger players telling him he could only dribble and pass.

Sims went from Kirk Park to the Carrier Dome, and eventually traveled the world playing basketball. But he said none of it would be possible without the park.

Sims fondly remembers Mike Kitts, a Kirk Park aide. One day, Kitts challenged Sims to a friendly wager: a game of basketball for a can of soda.

They played once a week, with Sims getting really focused on basketball, he said.

Sims added that his proximity to the park was a great benefit during his childhood. He would go to the park immediately after school, and the walk home was never an issue — it was only two blocks away.

He remembers playing “night ball” with his friends, when younger kids had to go home after dark, and he would play until about 2 a.m.

When Sims was growing up, it was safe to play in Kirk Park past midnight. Today, it’s very different.

When he visited the park in April, the basketball court he played on growing up was missing its rims, and it was locked. The courts were taken away as a response to a rash of violence, he said.

While South Side parks have about the same, or sometimes more, funding as other parks, there is a high difference with violence across the 52 parks in Syracuse. This inequality, has been scaring parents and kids away from fine parks, Sims said.

Sims wants the park back to the way it was when he was a kid — when his parents weren’t worried about how late he was out.

In Wilson Park, the recreational center has served as a de facto community center for residents in Pioneer Homes, especially as an outreach for the youth. Wilson Park has the third highest funding for recreation centers, at $10,000, according to Syracuse’s budget report.

“Most of the kids that go to Wilson Park are from Pioneer Homes,” said Linda Campbell, Pioneer Homes manager. She is planning a community garden, where the goal is to teach nutritional value and healthy eating to children in Pioneer Homes. To do that, she’s getting the word out through Wilson Park.

Aldrine Ashong-Katai, a community engagement specialist, said Wilson Park is a significant part of their community garden planning, because the park always provides an influx of children wanting to be involved.

The park’s rec center has children coming in every day for various activities, which is how they find out about these outside programs.

Last year, when he reached out to Wilson Park, Ashong-Katai said it was a huge success — 22 children joined the community garden effort. They met a cook and made their own bread.

“Wilson Park’s become the hub, it’s the incubation where a lot of kids attend,” Ashong-Katai said. “It’s a dynamic partnership.”

Visit MyHousingMatters.com for full stories from a special project on Housing in Syracuse by Newhouse journalism students