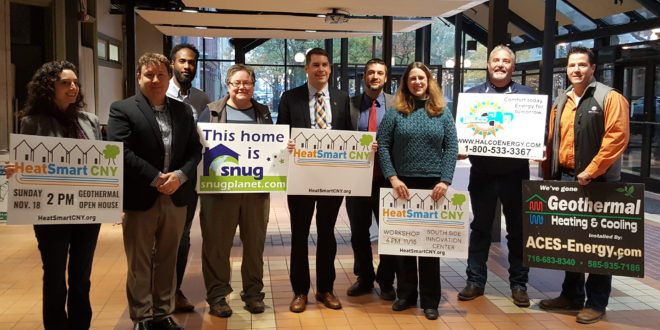 Clean heating and cooling systems are becoming more accessible to members of the Syracuse community with the launch of HeatSmart CNY’s campaign to install geothermal and air source heat pumps for area residents.

The pilot campaign, launched in November, was organized by the Central New York Regional Planning and Development Board and Alliance for a Green Economy with a donation of $500,000 from the New York State Energy Research and Development Authority.

Those funds go toward workforce development to train members of the community to work as installers, and money also will go toward programs for low and moderate-income households to help people install heat pumps in their own homes. Additionally, the donation will help with outreach and educational programs to teach the community about this technology.

The first outreach event was held Nov. 15 at the South Side Innovation Center. Tonight, ArtRage will hold a Winter Warmth Workshop and New York Wine Tasting from 6:30 to 8:30 p.m. at the gallery, 505 Hawley Ave. to educate interested residents.

The average household spends more than 35 percent of its budget on heating and cooling and hot water, said Lindsay Speer, HeatSmart CNY’s campaign manager. However, she added, there is a range of incentives between the federal tax credit, state rebate and utility incentives, that make the cost more affordable. Heat pumps are a long-term investment in peoples’ homes, Speer said.

“It drives down your annual bills,” Speer said. “The challenge is that there’s a little bit of an upfront cost to it and that’s what we’re working on as a campaign to really try to overcome through creative financing, through education to people and also pushing for more and more incentives.”

Costs of installation can be in the $3,500 range for air source systems, and geothermal systems can cost around $20,000 with incentives, Speer noted. Costs also vary with each house.

“One of the reasons that we started this campaign in the South Side is because we want to make sure people know about it, that we’re not leaving behind people because its perceived that they can’t afford it,” Speer said.

One common misconception about heat pumps is that they will not create enough heat for the cold winters in the Syracuse area, said Chris Carrick, a member of the Central New York Regional Planning and Development Board. Advances in the technology have made heat pumps viable up to 13 degrees below zero, Speer added.

“With heat pumps, whether it’s ground source or air source, you’re using electricity to capture heat that’s in the environment around you and bring it into your home,” Speer said. “They’re very common in a lot of other places.”

Carrick said at the workshops that the campaign is hosting attendees are educated about how the technology works and what grants are available to help financially. They also meet with installers.

“We try to create a supportive environment for folks to ask the questions they have and get them answered,” Carrick said.

In addition to increasing accessibility to low-income households and creating new jobs for members of the Syracuse community, the campaign seeks to address a growing environmental need for clean heating and cooling, Speer said.

The majority of greenhouse gas emissions from human activities in the United States are the result of the burning of fossil fuels for electricity, transportation and heat, according to the U.S. Environmental Protection Agency.

According to the United States Census Bureau, approximately 73 percent of the housing units in Syracuse use utility gas for heat.

“If people are burning fossil fuels, whether its oil, propane or natural gas, those emissions don’t ever decrease,” Speer said.

“When you’ve got to spend a lot of that on heating and cooling your home, that means you can’t spend it on the other things that you need to invest in to help get you out of poverty — the things that afford you and your family a better opportunity and a better life,” Abdul-Qadir said.

Abdul-Qadir said the first step in the process of installing the heat pumps involved insulating the home to make it energy efficient. Installers then dug a well in the ground and connected it the house. Abdul-Qadir said he thinks this campaign is a good opportunity to grow one’s property value and an opportunity to pay less on heating and cooling homes.

“When we are at our best is when we are all working together, and this is just another great example of that,” said Syracuse Mayor Ben Walsh at a press conference for the campaign. “By doing so, we hope to achieve an integral part of our vision, which is to ensure opportunity not just for some in this community, but for all.”