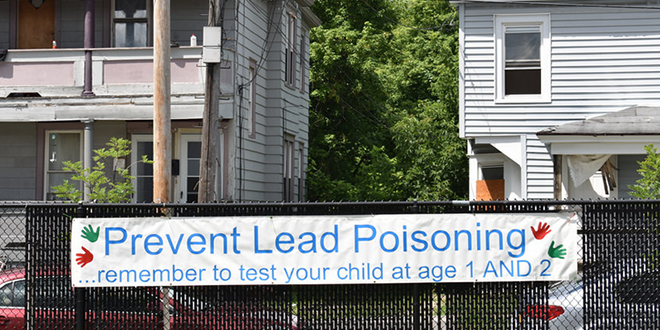 Guest Column: Get the Lead Out

Legal Services of CNY is mounting a campaign and organizing a coalition to end lead poisoning in Syracuse by 2025. Are you all in? If you’re not sure why you should be, read on.

WARNING: The following information is not for the lighthearted.

In 2012 it was estimated that 1 in 38 children is affected by lead poisoning. Those children are most often urban, poor, not white, living in old and substandard housing. In 2016, Syracuse was found to have had the highest rates of lead poisoning in the nation between 2009 and 2015. Today in Syracuse, the highest incidences of lead poisoning are in the city’s poorest neighborhoods, including zipcodes 13205 and 13207.

Lead poisoning causes brain damage. It prevents the brain’s nerve cells from communicating. That means neural pathways in the brain, responsible for everyday living—talking, walking, thinking, deciding, remembering—are weak and missing. Lead poisoning also REDUCES the physical development of the frontal lobe of the brain—so that it cannot function normally.

Lead poisoning is not a COMMUNICABLE disease. It is not passed from person to person. It is a social disease, the result of insufficient efforts to improve and remove poisonous living areas that our children are subject to. The affects of lead poisoning are alarming, however there is reason for hope: it is entirely PREVENTABLE.

If you’d like more information or would like to get involved with the campaign to Get the Lead OUT of Syracuse, please contact Paul Ciavarri of Legal Services of CNY at pciavarri@lscny.org  Currently volunteers meet monthly from 6 to 7 p.m. on the second Monday of the month at 500 Erie Blvd. West. Pizza is served at 5:45 p.m.

— This column was adapted from a speech given in January by Lisa Saka, of the CNY RISE Center