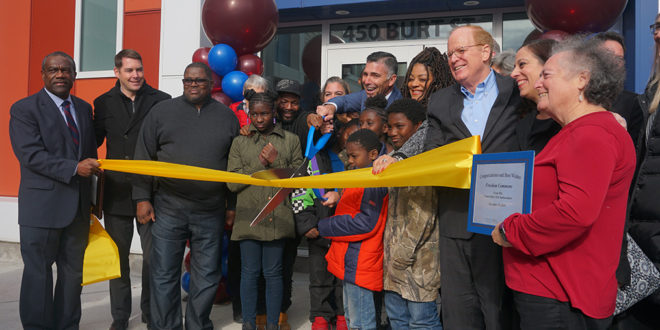 At 10:30 a.m. community members filtered into a tent pitched in the shadow of Freedom Commons, located on Burt Street, for speeches to celebrate the opening of the $14.6 million housing project, referred to by residents simply as the Commons. Among those in attendance were elected officials Mayor Ben Walsh, Sen. Rachel May and Assemblywoman Pamela Hunter.

“It might be cold outside but our hearts are warm today,” said Michael Hein, commissioner of the New York State Office of Temporary and Disability Assistance. “This model will provide supportive housing to formerly incarcerated individuals, who are struggling with histories of substance abuse disorder, mental illness or both.”

In his speech, Hein said the housing project comes as part of Gov. Andrew Cuomo’s commitment to invest $20 billion in the development of affordable and permanent supportive housing for New Yorkers throughout the state over the next five years. He noted the project is Upstate New York’s first attempt to replicate the supportive housing model created by the Fortune Society for formerly incarcerated individuals in West Harlem.

“This all came to be out of a conversation with the Deputy Secretary of Public Safety who said there is no re-entry housing in upstate New York… When they get out of prison, where do they go?” asked JoAnne Page, executive vice president of the Fortune Society.

Like the project in Harlem, Freedom Commons will serve both those who have had trouble securing permanent affordable housing as well as individuals being released from prison. The three-story structure includes 43 units of affordable housing and an 11-bed emergency shelter.

“It’s a place you drive by and say I want to live there too. I think we need to get past that point where the beautiful things are only for the wealthiest or most privileged people in our community,” May said of the finished product.

Those living in the permanent units cannot make more than 50% of the median income within the county to be eligible, according to a management analyst with Freedom Commons. Temporary housing units are consolidated within their own wing to allow residents there to slowly acclimate to life out of prison in a program called the Freedom Academy. This serves as an alternative to Syracuse homeless shelters such as the Mission, which multiple tenants expressed made them feel unsafe.

In his speech, Walsh spoke of the limited options formerly incarcerated individuals have when going through re-entry. “This project is a shining example of the burgeoning revitalization of the South Side,” Walsh said, “and will serve as a beacon of hope to those seeking a second chance.”

Residents of Freedom Academy will be chosen based on interviews conducted prior to release of prison where they have shown a willingness to participate in 35 hours of community service and counseling, according to the Project’s Director Phyllis Riles. Riles says Academy residents are expected to move in by Dec. 1.

“Everyone thinks these projects happen overnight, but there’s a lot of arm twisting and begging to make this come together… I just said if not us, who will,” said Bill Simmons, executive director of the Syracuse Housing Authority, as he thanked those at the Community Center for Alternatives (CCA) and The Fortune Society for their service to the community.

“We have been doing a lot of community engagement over the years and the generosity we received during this project has been incredible… This really is a testament to what a scrappy agency can do,” said Kelly Gonzalez, deputy director at CCA, as she thanked her staff and Syracuse service agency partners.

As the speakers shared their final thoughts, community members filtered out of the tent to prepare for the ribbon cutting. Residents of the Commons stood shoulder to shoulder with those who had spoken, commemorating the finished project as a community.

“I’ve been here since Aug. 29 and it’s been wonderful. I have been incarcerated and homeless. It was a second chance for me,” said Van Louis, a resident of the Commons who stood next to Walsh during the ribbon cutting. Louis says he hopes this is just the beginning. “I wish that everyone can come out and be a part of this,” he said. “And I hope they keep making places like this.”