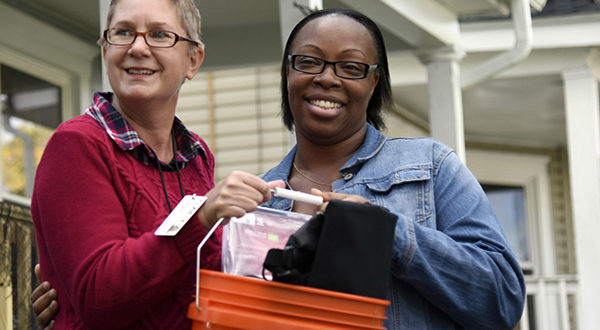 Tanesha Keene had lived in a collapsing and lead- contaminated home on Marguerite Avenue with her two sons, 10 and 2, since August 2015. Without a working furnace and little insulation, the family lacked protection in winter. The basement contained asbestos and a hazardous tangle of electrical wiring that reduced energy efficiency and contributed to rapidly rising electrical bills. 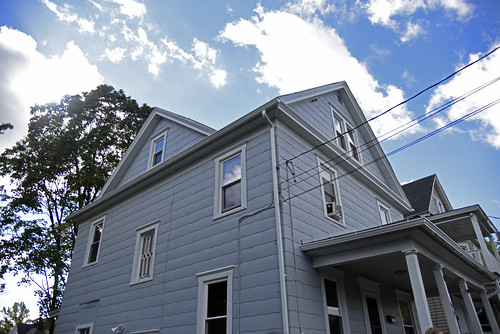 This house on Marguerite Avenue is the first one to be weatherized by the Green & Healthy Homes Initiative Greater Syracuse. A $1 million grant from New York state Attorney General Eric T. Schneiderman will go toward improving more than 200 homes.

Through the work of Home HeadQuarters, PEACE, Inc. and more than a dozen other community partners, the Keene home is the first to benefit from the new Green & Healthy Homes Initiative Greater Syracuse weatherization program in the South Side area.

At an October press event, Syracuse Common Councilor, District 3, Susan C. Boyle praised all those who helped to improve the Keene home. “This was an amazing effort by incredible people,” Boyle said. “No one wants to take credit because it was a team effort.”

“The city, working in conjunction with GHHI and our community partners, is committed to making sure families have a safe, healthy environment in which to grow and thrive,” said Syracuse Mayor Stephanie A. Miner in a press release.

Although the Keene home qualified for PEACEInc.’s Weatherization Assistance Program, which has been operating in Onondaga County for more than 25 years, the house was at risk of being deferred to a later date because of its asbestos and hazardous electrical wiring. But the initiative’s collaborative structure, bringing together several nonprofit partners, allowed for a faster approach to tackling these health and safety issues.

“Our health starts at home,” she said in a press release. “Our physical, emotional and social well-being gets affected by where we live starting from conception until old age. Therefore, it is crucial that we effectively engage community members and align all of our resources in order to promote and provide safe and healthy homes for our residents.”

The latest United States Census Bureau report on poverty states that 31 percent of the Syracuse population lived below the poverty line in 2015; that means an income below $24,257 for a family of four. The 31 percent equates to more than 40,000 Syracuse residents. In such circumstances, health and safety issues in homes often go unattended.

According to a release, by combining “local, state, federal and philanthropic investment into an integrated, comprehensive approach,” the initiative serves low- and moderate-income families in Syracuse better than individual programs.

“How we address health and safety issues isn’t always about asking the federal government for more money, but working together to create innovative ways to work on health and safety,” said Paul Driscoll, commissioner for Syracuse Neighborhood and Business Development.

“A home needs to be a safe place,” Cosentino said, “and, most importantly, filled with healthy people.”