Get ‘Fit’ in a Local Park

In an increasingly fast paced world, finding time to exercise and stay healthy is becoming harder and harder.  But FIT Parks!, a collaboration between Upstate Medical University, the City of Syracuse Department of Parks, Recreation and Youth Programs and Onondaga Community College, is trying to change this.

“The purpose of the program is to address people getting more physical activity,” said Chris Abbott, program director for the parks department.

On Tuesdays and Thursdays classes meet at three city parks: Burnet Park, Thornden Park and the South Side’s own Wilson Park.  The classes at Wilson Park begin at 6 p.m., and last around an hour.

Each class is designed by physical therapy experts at the school with a focus on helping people learn to “build strength, muscle and aerobic endurance,” Abbott said.  The classes, which are geared towards adults, aim to teach people how to do this in safe and easy ways.

Though taught in a group, all the exercises are ones that can be done alone after. People don’t even have to go to a gym, as accessibility was one of the main things the program’s planners kept in mind. Any of the equipment found in the city’s parks can be used including: benches, jungle gyms and green space. 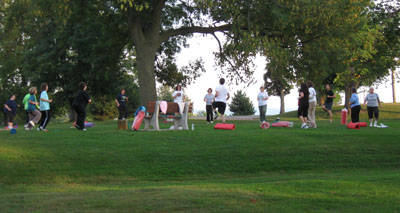 “We want people to utilize the parks,” Abbott said, noting that they are not just there to look nice.

While this current session of classes is coming to a close at the end of October, there are still classes left. Even if people have not attended any of the previous classes, they are still encouraged to come and participate.

The program will also continue again when spring rolls around.  Abbott said that the city is hoping to expand to other parks, but that classes would still be happening at Burnett, Thornden and Wilson Parks.

In the mean time, the FIT Parks! Programs will hold health chats on the second Tuesday of each month (except December), even after the fitness classes have stopped. The Oct. 13, speaker is Dr. Dale Avers from Upstate Medical University. His theme will be “Fitness is Possible…No Matter What!” Avers will speak at Burnett Park, but the location will rotate between the parks each month.

Funding for the FIT Parks! Program was provided by a grant from the Central New York Community Foundation

For more information, visit the Fitness and Wellness page of the city’s Department of Parks, Recreation and Youth Programs Web site.