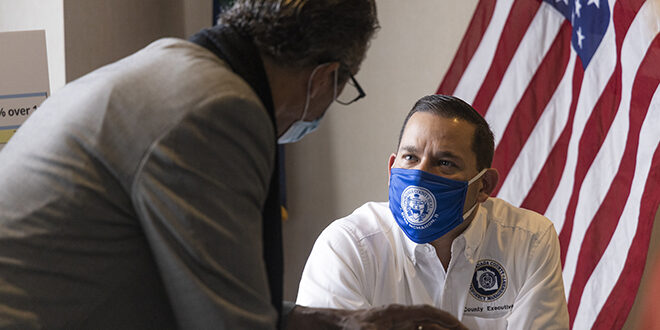 Charles Garland, 16th-District Legislator-elect, speaks with Onondaga County Executive Ryan McMahon during the Nov. 19, final hearing on the county’s redistricting plan. Garland spoke publicly, stating his district’s voice — that of the South Side — will be diluted under the new map. | Dylan Suttles, The Stand

Maybe in a perfect world, with his self-styled reputation as a “bipartisan problem solver,” Ryan McMahon doesn’t host a standing room only potential super-spreader in a cramped conference room.

Maybe he takes charge, as you might expect from a $167,000-a-year county executive. Maybe he moves Friday’s hearing from the 14th floor of the Civic Center to a space airy enough to accommodate the outrage — like St. Joseph’s Health Amphitheater at Cadmium Shores or whatever it’s called. After all, when you throw out a redistricting map that dilutes the city’s African-American vote into next-to-nothingness and — moving from sinister to stupid  — puts the Village of Manlius in a different legislative district than the Town of Manlius, people will tend to turn out in large numbers.

Charleen Tarver was one of several speakers who didn’t put too fine a point on it. She called the proposed map “racial gerrymandering,” particularly with regard to the 16th Legislative District, which would drop from 59% African-American to 37%. That doesn’t include an estimated 5,000 people projected to be displaced by the I-81 project.

“We have the highest concentration of childhood poverty in the nation in the district that is being further marginalized,” she said.

Redistricting is rarely simple, and it’s inevitable that someone ends up unhappy. But when the process takes place in almost clandestine obscurity, when it’s coated with grimy partisan fingerprints, when the sausage-making turns communities of color into voiceless appendages and runs roughshod over long-standing geographic connections, things have a way of going downhill fast. In 2015, Albany County was ordered to pay $1.7 million in legal costs after a judge shot down that county’s redistricting map for diluting minority voting power.

Charles Garland, 16th-District Legislator-elect, expressed optimism of avoiding such legal unpleasantries. After a private chat with the county exec, Garland said McMahon seemed surprised and concerned by what he heard and committed to addressing the grievances. “But I know that what people say is not always the same as what their actions are,” Garland told me. He joined virtually all of the two dozen speakers in urging Onondaga County’s top official to veto the map.

On a positive note, it’s rare to see citizens from as disparate corners of the county as Midland Avenue to the apple country of Lafayette agree on any issue. The Legislature’s incompetence has brought us back together.

Or McMahon the Microbial Multiplier. Seriously now, can we really expect this mild mannered Establishmentarian to cast aside his Republican chums, reject their Jim Crow-era cartography and push for an electoral map that distributes voter power thoughtfully and fairly throughout a county of nearly half a million people? Isn’t the more realistic goal to enroll him in some kind of Webinar that walks him through the meaning of social distancing?

Bryn Lovejoy-Grinnell, an administrative law judge and former Common Councilor, was one of the hopefully heavily vaccinated who fought her way to the podium through invisible droplets to denounce the meeting’s COVID-unfriendly nature. She noted there were nine rows of four to five tightly packed chairs, all filled. Tables were stacked in the back, eating up space that could have allowed people to distance just a bit. Constituents and media stood in the back, in the aisles and the hallway. Lovejoy-Grinnell noted that the crowd would have been packed even more tightly except that many people, including those with disabilities, “physically felt unsafe” and left immediately. Others, of course, including new Americans who inhabit the 17th District, had no idea the meeting was happening at all, which surely wasn’t a coincidence.

“This is not a brave process,” said Lovejoy-Grinnell, comparing the slovenly indifference of the map, which was not even displayed in the room, to a kid whose homework is so sub-standard he tries to hide it from his mom in his backpack.

“If you’re proud of something, you show it,” she said.

Except it was a brave process in a sense. When I walked into that room a few minutes late and saw how crowded it was, it took every ounce of courage I possess to not run screaming from the Mulvoy Monstrosity for the breezy tranquility of the Manlius Swan Pond, which, by the way, the new map would locate in a Republican legislative district in Snellville, Ga. But enough about my heroism. How about Van Robinson, a Syracuse political legend now in his 80s and using a walker? How brave was Robinson to stand his ground against racial injustice, yet again, and this time while standing inside a Petri dish convened by Onondaga County’s vector-in-chief?

“The redistricting should have been done by an independent committee to avoid any problems that we’re having,” he told the room.

Enough with such incendiary rhetoric, you wild-eyed Leftist!

Here’s the good news: Everyone at the hearing was masked, so in addition to the icy dread of premature death wafting through the room, there was optimism, a faint hope that this time public comments will be heard in a way they were not at the start of the process.

See, as several speakers pointed out, we have this quaint idea in America that voters are supposed to pick their politicians, not the other way around. There’s still time for that happen, time to produce a better map and perhaps seek input from county residents who have real jobs and can’t take off in the middle of the day to implore county officials to their jobs. A final map, which redraws all 17 legislative districts in the county, will go into effect in 2023.

Ryan has until Dec. 12 to veto the current offering and ask the Legislature for changes.

So there you have it. It’s up to Ryan McMahon to save democracy. Short of that, I’m counting on him to at least hand out free disinfectant wipes and hand sanitizer at his next super spreader.