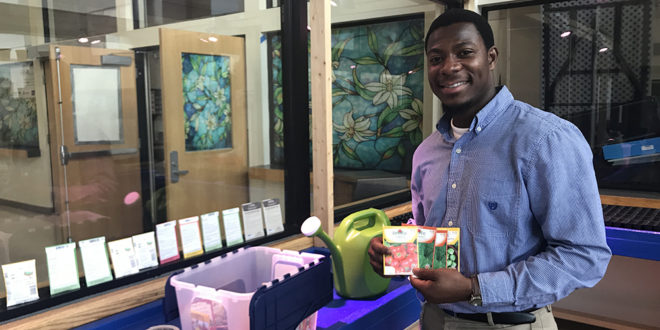 Aldrine Ashong-Katai, a project manager at SUNY Upstate Medical University, shows off a few of the seed varieties available for planting at the Garden of Health in Toomey Abbott Towers.

Aldrine Ashong-Katai, known among residents of Toomey Abbott Towers as a man full of ideas, launched into explaining his latest project: an indoor greenhouse on the second floor of the apartment building. His exuberance attracted residents, who repeatedly wandered over to interrupt, wanting to ask about the glass room next door.

“Hey Al,” one man called out, using Ashong-Katai’s nickname. “What do you have going on in there?”

“It’s a ‘green’ room,” said Ashong-Katai, smiling and explaining that his project had a purpose: engaging the community and linking residents to healthy produce.

Ashong-Katai’s endeavor is a small, temperature-controlled greenhouse called the Garden of Health, which opened Aug. 18. Bags of parsley, basil and mint seeds line one side of the room, and shelves of small pots hang from the ceiling. The greenhouse serves as a place for residents to grow and eat their own healthy food and interact with other residents in the building. What’s more — it also replaces an indoor smoking room.

“We had a room that would take away life,” said Ashong-Katai, “and now we have a room that promotes life.” 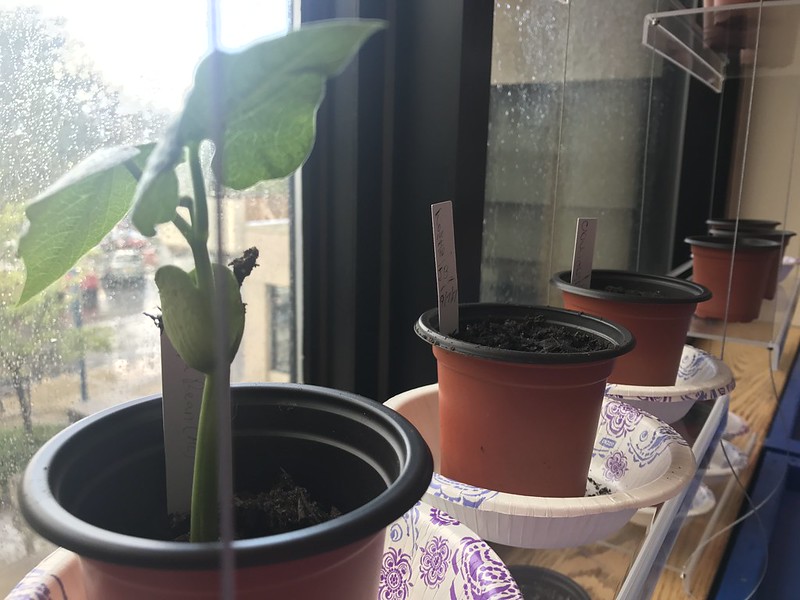 A lima bean plant sprouts up in Al’s Garden of Health. The grow house was an effort created to promote healthy living among residents in the Toomey Abbott Towers, located at 1213 Almond St.

He said that some residents rarely leave their rooms and engage in practices that are not healthy, such as smoking and consuming junk food. Initiatives like the Garden of Health get the residents to socialize with one another and engage with their community, in addition to learning how to eat healthy, homegrown produce.

Ashong-Katai, who is a project manager at SUNY Upstate Medical University, conceived the idea last fall as an answer to the question of how to expand on a community garden project he had headed in another housing complex. He took advantage of a Syracuse Housing Authority policy, adopted in 2015, that banned smoking rooms in all its properties, including Toomey Abbott Towers.
That gave him the space he needed: an indoor glass-enclosed room, once used for smoking, on the second floor, said Constance Gregory, resident engagement specialist at Upstate Medical University.

“It was honestly serendipitous,” she said. “The room just happened to be there, and we were able to use it.”

To fund the project, Ashong-Katai used part of a $15,000 grant from a local nonprofit, HealtheConnections, that was donated to develop disability programs in Syracuse housing facilities. Using this money, Ashong-Katai said he was able to develop a greenhouse plan that was accessible for handicapped and disabled residents.

Aldrine Ashong-Katai conceived of the idea for Al’s Garden of Health as a way to engage the community and teach residents of Toomey Abbott Towers about healthy eating.

Looking for help in planning and building the greenhouse, Ashong-Katai approached State University of New York College of Environmental Science and Forestry professor Matthew Potteiger, who in turn enlisted two SUNY-ESF students to create the blueprint.

One of the students, landscape architecture graduate Brian Swank, said that by the time the plans were finished, they had only two weeks to construct the greenhouse before he graduated.

“We really hammered it out,” Swank said. “I’m really happy with how it turned out, though. It’s nice to take the skills I’ve always had and do something good.”

The garden officially opened in mid-August. Ashong-Katai’s next goal is to encourage residents to come in and do their own gardening. In order to keep the project running smoothly, he said he appointed resident health advocates in the building to get other residents interested in the project and to monitor the greenhouse.

“All we have to do is come in and garden,” said Bobby Little, a Toomey Abbott Towers resident and one of the health advocates. “I am looking forward to the room becoming as green as the outside.”
Another resident, Phyllis Johnson, agreed. She said that many residents are looking forward to flexing their green thumbs.

“I can’t wait to get my hands in the dirt,” she said. “I just love the feeling of earth in my hands.”
Ashong-Katai consulted a gardener to figure out which seeds to purchase and got dozens of starter pots. He said he hoped, over time, that the residents would grow bigger and bigger plants and the garden eventually would be moved to a different space.

Though the project is complete, Ashong-Katai visits the greenhouse a couple of times a week to check up on the garden and repair any leaks in the pipes. There haven’t been many residents doing their own gardening yet, but he said the curiosity is there, apparent by the number of residents coming up to ask him about the space.

Each time, Ashong-Katai patiently explains the concept of the garden. He greets each resident by name. When stepping into the greenhouse, he tenderly rearranges the pots and brushes the dirt off the workstation.

Amid the rows of dirt-filled pots, a single green plant has sprouted.

“It’s mine,” said Ashong-Katai, smiling. “It’s a lima bean plant. I guess that’s what I do. I make things happen.”

—  Article and photos by Hanna Horvath, The Stand Staff reporter