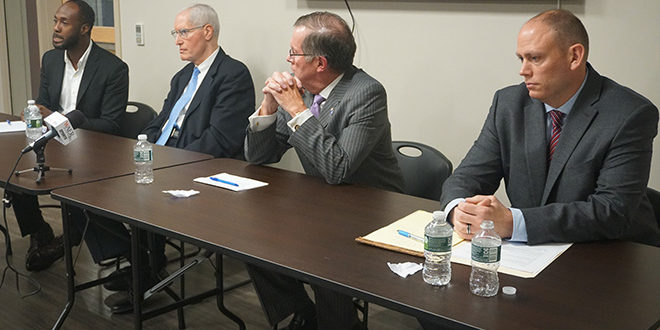 Republican incumbent William Fitzpatrick is seeking his eighth term as District Attorney, allowing him to serve 32 years in office. This is the first time he is running opposed since 2007. The election will take place on Tuesday, Nov. 5.

Moderator Yusuf Abdul-Qadir, the Central New York chapter director for the New York Civil Liberties Union, opened the debate by emphasizing the importance of the district attorney position within the community.

“The Onondaga District Attorney’s Office is meant to represent the people through seeking to achieve justice … Mass incarceration and criminalization have no doubt, devastated our communities. You have the opportunity to put an end to this,” Abdul-Qadir said.

On bail reform, Keller and Lavine agreed the bail system needs to change. Keller said that the new New York state legislation on bail set earlier this year is a step forward. Fitzpatrick disagreed, saying his office has been working to provide the services implicated in the bill and there is no budget for it.

However, the candidates agreed that nominal bail should not keep low income, non-violent offenders in jail. Fitzpatrick challenged the audience saying he will release anyone who is not a danger to society and sitting in jail because they do not have means.

“Let me know and he or she will be out tomorrow,” Fitzpatrick said.

Later during the forum, a community member gave Abdul-Qadir the names of two offenders in jail. Fitzpatrick promised to look into their cases and have them released.

Fitzpatrick’s lack of resources for offenders suffering with mental health was also under criticism.

“There has been a complete failure of integration between mental health and law enforcement,” Lavine said.

Keller argued that many of his clients are forced to plead guilty to crimes to receive the benefits of mental health diversion, denying them the ability to assert their innocence. Fitzpatrick agreed that more should be done.

“According to Sheriff Eugene Conway, two-thirds of people being held have some sort of mental health issue. The resources allocated for that are disgraceful,” Fitzpatrick said.

Keller pressed Fitzpatrick on his decisions regarding police accountability.

Fitzpatrick responded by referencing his pushes against former Police Chief Frank Fowler, who was in attendance, to require police to videotape conversations with defendants. This occurred prior to the practice being required under New York state law. He also spoke of helping prosecute 30 police officers during his career, including the recent cases of sexual assault and excessive force by officers.

In interviews prior to the debate, Keller accused Fitzpatrick of being racially biased against Black community members. During the debate Abdul-Qadir asked the candidates whether they believed there are racial disparities expressed within the system of Onondaga County today. Fitzpatrick said a disparity between Black and white community members does not exist according to metrics within the county. Later in the debate, he clarified his statement.

“When I walked into this office in 1992, I saw 20 people being held and 19 of them were Black and brown. I get it. And I’ve got to keep trying, to keep fighting to make sure that doesn’t happen,” Fitzpatrick said.

In speaking with The Stand, Keller said he does not think the DA is racist, but he fails to recognize that his policies contribute to a system of racial injustice. He repeatedly says that his job as a defense attorney in Onondaga courtrooms allows him to see this firsthand.

Fitzpatrick responded to attacks on his discretion for continuing to seek the office of district attorney saying, “If you want to limit me, do it at the ballot box.”

Early voting is set to begin Oct. 26 and continue until Nov. 3. The current locations are Clay Town, Dewitt and Van Buren town halls, Syracuse Community Connections and the Magnarelli Community Center, and the Lafayette Fire Station. This is the first time there will be early voting for this election.

“We want people to be informed about the decision that they make,” Abdul-Qadir said. “Most importantly, we want to get people to understand criminal-legal issues should be voting issues and those affected and irreversibly impacted by the system should be coming out.”