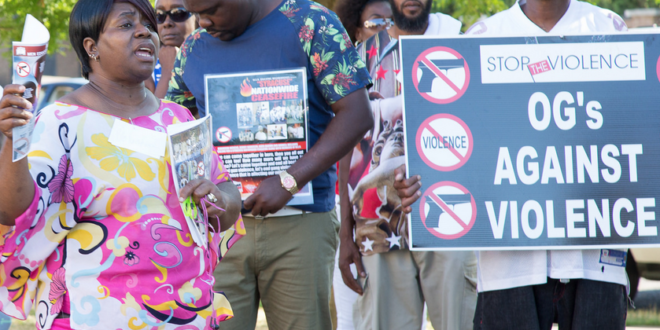 Denise Nickens, mother of Habakkuk Nickens, speaks to the crowd about ending gun violence the Gone But Not Forgotten balloon release held July 15, 2016, at Billings Park in downtown Syracuse. She assisted in finalizing the event, which was organized by her son who is currently incarcerated. | Aubrey Moore

Balloon release allows families to remember those lost to violence

A former V-NOT gang member is attempting to put an end to neighborhood violence — despite the fact that he is locked up in federal prison.

While incarcerated, he worked for months to plan July’s Gone But Not Forgotten event, which released balloons at Billings Park in downtown Syracuse.

This is the second year Nickens has put on this event, which was bigger than his first one, thanks to support from local groups such as O.G.’s Against Violence, Real Fathers/Real Men, Empower Incarcerated Young People and Fall Forward.

After speeches by community members and local leaders, balloons were released, each with the name of someone who died because of violence.

Helen Hudson, common councilor at-large, stood in front of the crowd and stressed that the black community needs to love one another.

“We carry so much anger,” she said, “and we don’t even know why we carry it.”

Through her work with Mothers Against Gun Violence, Hudson has talked to more than 200 mothers who have lost their children to what she calls senseless violence.

“We need to take care of these babies that are left behind.” 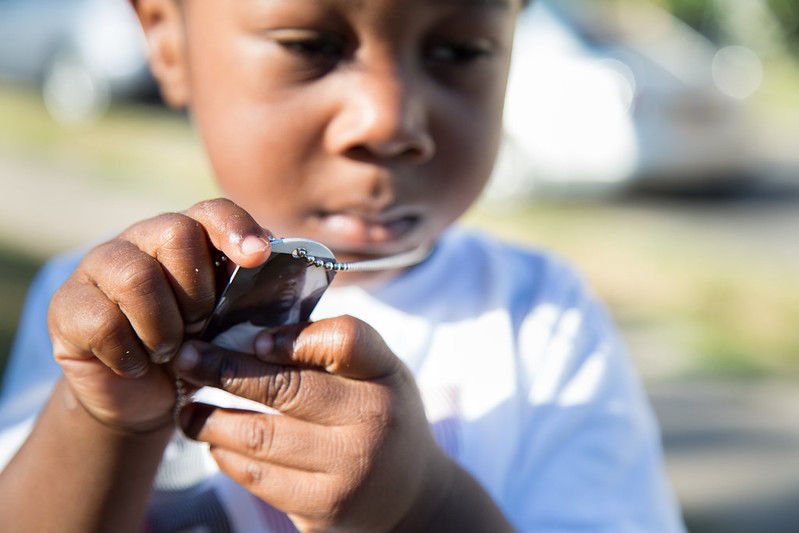 Tabarrie “TJ” Tillie Jr. wears a dogtag with photos of his father, Tabarrie “Dooly” Tillie, who was shot and killed this past June. | Dominique Hildebrand

Jazmin “Jazzy” Boatwright, 5, lost her father, Adon “Lil Donnie” Boatwright Jr., when she was 3. She was excited to release a balloon in memory of her father and was brought to the event by her grandmother, Vickie McCullough.

“She knows that her daddy’s an angel,” said McCullough, who learned about the balloon release on Facebook. She said her son and granddaughter wanted to attend because they know three people close to their family who were killed by gun violence.

“Our neighbor, cousin and her father,” McCullough said. “She was so young when it happened, and her mother, my daughter, still has a hard time with the loss.” 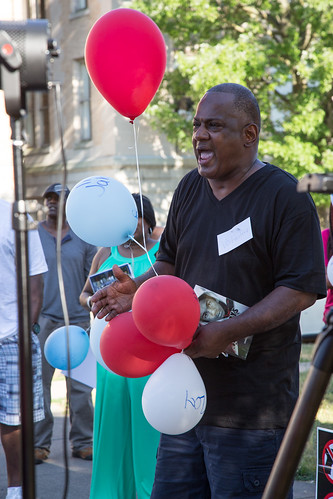 General Davis, co-founder of Real Men/Real Fathers, praised Nickens during his remarks. “He’s doing more on the inside than many are doing out here,” he said.

He was joined by his oldest son, General Davis Jr., who recently was released from prison and is working with his father to mentor youth. “I’ve changed my life for my pops, to be a better person,” Davis Jr. said.

Nickens’ mother, Denise Nickens, learned a bit about her son’s actions that resulted in his incarceration. Most details came out in news articles and at trial. She is thankful he is still alive and views his current incarceration as part of God’s plan. She describes herself as her son’s foot soldier. After working full days, she would spend evenings carrying out her son’s plans to ensure his event would be a success.

“While incarcerated, he and others put their heads and their hearts together to make a difference,” she said during the event.

Nickens was the driver in a fatal drive-by shooting in 2010, which resulted in the death of 19-year-old Kihary Blue, a former star football and basketball player at Henninger High School. At the July event, Nickens’ mom released a balloon with Blue’s name written on it.

“To the woman who lost her son, I made a vow to do something in my days to repay her and make her smile,” said Nickens, who has also sent a letter of apology to Blue’s mother through the judge who presided over the case. “I figured I wasn’t going to just help her, but help everybody.”

Nickens said he now considers himself a changed man. As evidence, he spoke in a phone interview from prison about how he founded the anti-gang program M.E.N. — Men Educating Neighborhoods — in November 2014. The program relies on volunteers who share his belief that gang violence must be reduced. 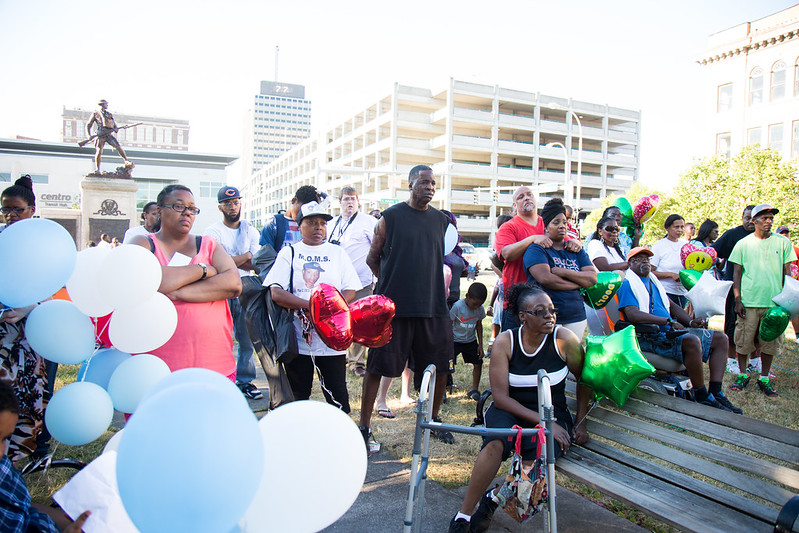 “I owe it to my family members, kids and my community, because I know I’m better than that,” Nickens said. “I came in here with the attitude that I’m going to change something.”

Nickens said he first decided to change his ways shortly after Blue’s death. He originally founded a community outreach program called Help Break Down the Silence, with the goal of helping at-risk youth. Although the program was short-lived, Nickens said he’s hoping to continue his community work through M.E.N.

In 2010, Nickens ran Mary Nelson’s annual backpack giveaway, his mother said. “He was always busy and gave back,” she said. “Mary let him run her event one year, and a week later he held his own backpack giveaway that Mary helped him with.”

His mother remembers Nickens as a teen holding several jobs, writing and performing plays and serving as a mentor to younger kids at the Southwest Community Center. She said it wasn’t until his 20s that she noticed any bad behaviors. She was told his small offenses were guilt by association.

“But God has a plan,” she said, adding that she gets through tough times with the help of prayer. “Prayer changes things.”

Tyrone Hines, who was sentenced to life in prison in 1995 for running a drug-trafficking ring in Syracuse, said he first met Nickens in November 2014 while in prison. Shortly after, Hines said he became one of the initial members of M.E.N. in an attempt to right his wrongs and try to end the rise of violence in Syracuse. “Even if we save one life, or two lives, it’s working,” Hines said.

Nickens concludes: “Maybe it was heaven-sent that I’m here, because if I wasn’t, then I wouldn’t be able to help all of these people.” 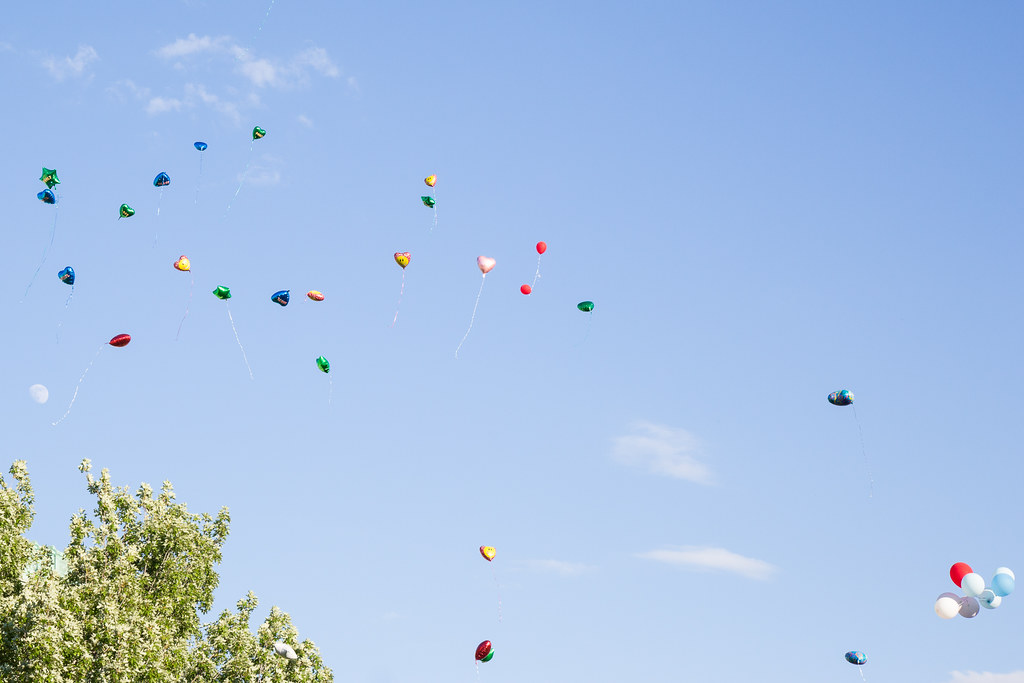 Balloons fly in memory of those lost to gun violence at the conclusion of the Gone But Not Forgotten balloon release. | Aubrey Moore