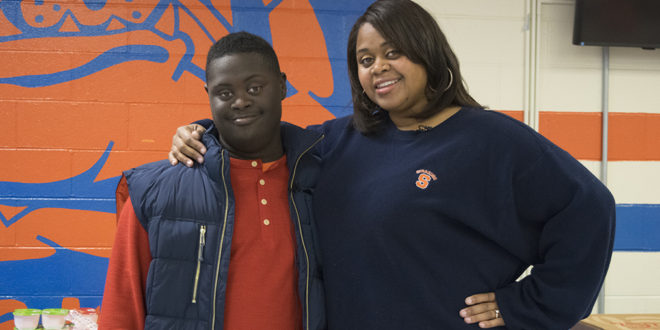 As season came to a close, players recognized for something that can’t be measured by stats

The Nottingham High School Junior Varsity football team were on their way to the cafeteria for what they thought would be a regular pizza party. They didn’t know Brandon and Brandiss Pearson would be waiting for them with a surprise appreciation message.

Brandon, a second year student, has Down syndrome and plays for the JV football team. Since Brandon was invited by others to be on the team, he and Brandiss, his mother, have been grateful  for including him.

“The boys have made sure he was supported and cared for. That’s what I want to celebrate; these boys probably don’t have a name for what they’re doing for him. They probably don’t even understand the impact they’re having on him. I want them to know that I’m grateful and obviously the community is as well,” Brandiss said.

The team’s effort to include Brandon went as far as putting him on the field, a move some didn’t expect.

“My little cousin came to a game and asked if Brandon is the water boy; and we’re like no, he’s going to be on the field. He was on the line of scrimmage; he was just one of the guys,” Brandiss said. “Even that, they didn’t have to do anything special, he was one of the guys and that’s the impact that I felt.”

Brandiss wasn’t the only one who acknowledged the boys’ actions. Brandiss reached out to community members asking to make shout out video message to the JV football team for exemplifying inclusivity. She received unexpected responses. The boys garnered not only community-wide attention, but also recognition from other parts of the world.

“It really surprised me that our name got out there so much. Knowing that we had a big impact on Brandon is another thing. I didn’t know it got that far,” said freshman Syinih Clark.

Sophomore Norris Gary, who’s known Brandon since he was 7,  felt honored when he saw the video message from Mayor Ben Walsh. 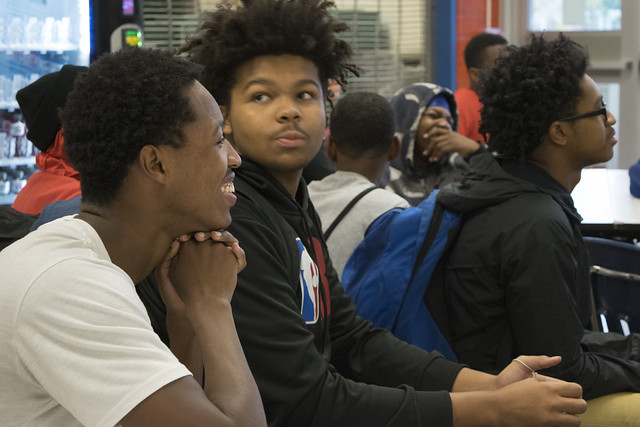 “I was very shocked (and) honored because I wasn’t really expecting this. I heard there was going to be a pizza party. But seeing that, it touched right here,” he said. “I never thought that the mayor … I’ve never seen him or talked to him.”

When Brandiss first found out her son had Down syndrome, she worried about whether he would live a life like others. Thanks to the team and community, she no longer needs to worry.

“We’ve just been really lucky that we have people who see that same vision for Brandon,” she said. “I want to help him live his best life as well.” 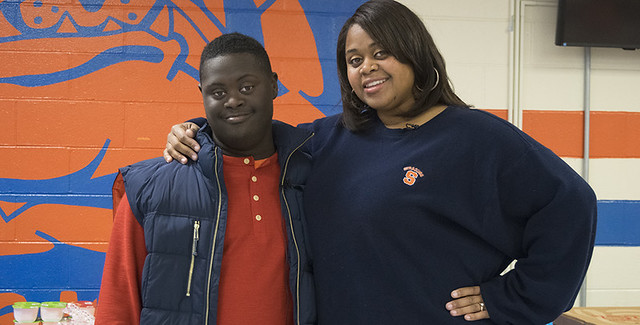 Along with the boys close relationship with Brandon, Athletic Director Alton Hicks said his relationship with him goes way back. There are many students who come from different struggles and backgrounds, he added, and he has found the Nottingham community to be very accepting.

“We are a really inclusive school, and we try to include everybody as much as possible,” he said. “Normally, in certain situations, he may not have been able to participate, but because of our kids, he is able to participate in athletics.”

He added, Brandon’s teammates helped to guide him through games and helped him on the field.

The appreciation message ended with Coach Marty Clanton tearing up and not able to give a speech. Hicks finished off by giving words of encouragement and a final team break.

“As you saw at the end, they always break ‘family.’ We tell them, ‘we don’t give up on you. We don’t quit on you. You’re going to make mistakes but we’re going to keep working with you so that what this is about, us working with people,’” Hicks said. “Brandon’s mom just wanted to honor these kids because this is the first time her son has really been a part of a inclusive team.”