South Side homeowners might be asked to purchase costly protection

Aggie Lane has lived along Onondaga Creek for 20 years and has never experienced a single flood. “I’ve never had waters from the creek come anywhere near my house,” Lane said.

Lane’s property is on Midland Avenue on the South Side along Onondaga Creek, an area that has recently been defined as a high-risk flood area for the first time by the Federal Emergency Management Agency, as a part of the agency’s new national flood map recalculations. 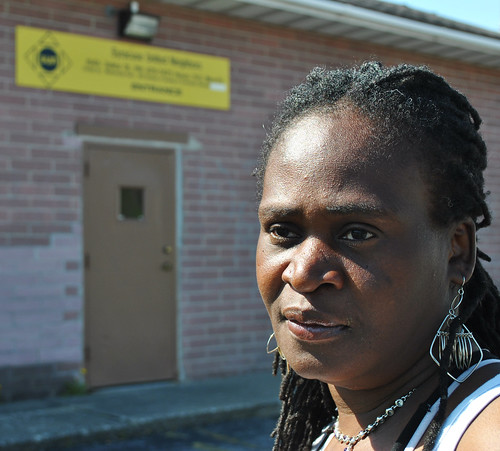 Mercedes Bloodworth of Syracuse United Neighbors has been working diligently in light of the new FEMA flood zone insurance hikes for residents all over Syracuse. -- Photo by Lena Budd

The recalculations began in 2010, and Syracuse city officials have been working since then to reduce the number of properties affected by the new mapping as much as possible, said Tim Carroll, director of Syracuse mayoral initiatives.

The addition of South Side properties along Onondaga Creek to the new flood maps has alarmed residents and city officials because the owners of these properties would be required by their mortgage holders to purchase flood insurance that could cost $240 to $1,260 each year, Torrijos said.

Lane said she thinks the cost of flood insurance is unnecessary, and she feels it is an unfair burden to place on South Side residents.

“This is an area where people have trouble with expenses like just paying their taxes,” Lane said. “I think if homeowners here are hit with these insurance costs, people will lose their homes.”

Mercedes Bloodworth, a homeowner of a duplex along Onondaga Creek and Syracuse United Neighbors community organizer, said the additional cost of flood insurance could be detrimental to the growth in the number of homeowners on Syracuse’s South Side. “Homeownership is pretty rare for a lot of residents on the South Side, and we really don’t need any more obstacles in our way,” Bloodworth said.

Approximately 47 percent of homes on the South Side are owner-occupied, Bloodworth said, and she fears that the additional cost of flood insurance could cause homeowners to move elsewhere.

“In so many ways, our community has been improving,” Bloodworth said. “We have new homeowners coming in, new houses being built, urban renewal projects. We don’t need the government setting back our progress.”

Bloodworth said in the last two years, the Syracuse Housing Authority has built 50 new homes on the South Side in order to promote homeownership. Of those 50 homes, 20 would be included in FEMA’s new flood maps.

“A lot of the homeowners have really had to work to be able to buy a home, and they’ve needed help from organizations like the SHA (Syracuse Housing Authority) along the way,” Bloodworth said. “Most of them are still struggling with their finances. We want to promote homeownership and help it grow, not make it harder.”

Bloodworth, a working single mother, said the proposed insurance requirement could jeopardize her ability to maintain homeownership as well. Bloodworth said she purchased her home for approximately $50,000, which is a price that she said is typical for homes on the South Side.

Lopez-Torrijos, the FEMA state flood mapping coordinator, said that the agency estimates that houses valued at $50,000 would have an annual flood insurance rate of $236 for the first two years and $535 for each year after that.

Bloodworth said she is worried about the additional cost of insurance that she could soon face.

“I’m in a better position than a lot of people around here because I have a steady job that makes me able to pay my expenses,” Bloodworth said. “But I still have a mortgage and bills to worry about, and I really don’t have another couple of hundred dollars to spend away.”

Bloodworth said as of right now, she is not aware of grants or loans available to help residents pay for insurance, but it is something that she and other community advocates and members will look into as the flood maps become finalized. 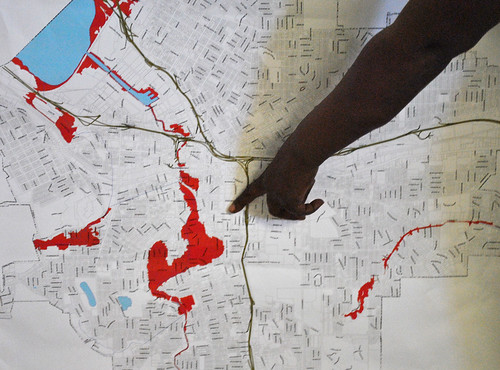 All the areas in the red fall into the flood zone dictated by FEMA. Residents in the zone are upset about having to pay more for flood insurance. -- Photo by Lena Budd

Eddie Brown, a Syracuse United Neighbors board member, has been advocating for the property owners along Onondaga Creek, in hopes of shrinking FEMA’s map.

Brown said Syracuse United Neighbors has been working with city officials since the start of FEMA’s flood map proposal in 2010.

“The old maps had it right,” Brown said. “Even with all the snow and rain we got last year, we didn’t have any flooding around here. We’re trying to get FEMA to consider that.”

Brown said he thinks the maps should be constructed based on the historical evidence of flooding and not through computer calculations.

“Paying for flood insurance in this area is just not necessary,” Brown said. “I know people who have lived here for over 50 years, and they can’t remember any flooding problems.”

Lane, the Midland Avenue homeowner, said even during Syracuse’s worst storms, she and her neighbors have never experienced flooding problems.

“Even in the big Labor Day storm of 1998, one of the biggest storms that ever hit Syracuse, we didn’t have any flood damage,” Lane said. “I remember the waters from the creek hitting the streets, but the water was nowhere near the houses.” 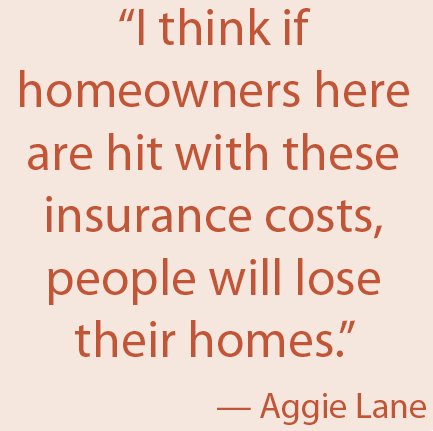 Carroll, the director of Syracuse mayoral initiatives, said during the past two years, city engineers have partnered with C&S Companies, a private engineering firm, to recalculate any data about the creek banks that could lower the flood levels estimated by FEMA.

“We have been looking into things like calculating the effects of trees, bushes and low bridges on the creek to prove that they don’t create as much back-up as FEMA estimates,” Carroll said.

Carroll said the city has been relatively successful in its efforts to reduce flood zoning in the area. The city was able to take about 105 properties out of the original flood zones proposed by FEMA, and the city plans to continue its efforts.

“FEMA has accepted some of our data that shows that Onondaga Creek can hold more water than expected, but we’re still trying to reduce the zones as much as we can,” Carroll said.

Lopez-Torrijos, the state flood mapping coordinator, said the new flood maps have little to do with changes that they have detected in the area. Instead, Lopez-Torrijos said the new maps were proposed because more advanced technology has been made available to measure flood risks since the maps were last updated in 1986.

Lopez-Torrijos said FEMA used light detection and ranging technology that is able to determine the contours of land by using laser pulses directed from a plane flying over a patch of land. FEMA also used updated engineering technology to measure the flow and depth of Onondaga Creek.

Lopez-Torrijos said city officials have been given until the beginning of May to make their case against the new mapping, and then the city’s responses will be considered. Torrijos said the mapping will be finalized by the end of this year.

The city will have six months to include the new flood zoning into the law, Lopez-Torrijos said, and after that homeowners within the flood zones will receive letters from their mortgage lenders informing them of their insurance requirements.

Bloodworth said Syracuse United Neighbors will continue to fight the changes to the flood maps, but she has little hope that they will be able to repeal the maps completely.

“We’re not going to be able to get those changes to disappear, but we’re going to help the community as best we can,” Bloodworth said.