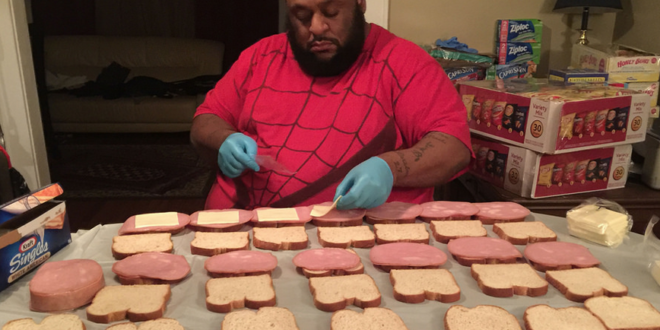 Alamin Muhammad prepares sandwiches before distributing to homeless in Syracuse.

We Rise Above the Streets distributes needed meals to homeless

After years of involvement in one of the most notorious gangs in Chicago, Joel Buissereth did not care to hear what he called the “religious garbage” his prison cellmate wanted to share with him.

“He told me one thing that had me shed tears,” said Buissereth, 44, who goes by the name Alamin Muhammad.

Muhammad, who was raised Catholic, adopted the Muslim religion after his fourth prison stay. Once released, he lived in Atlanta for five years, spending many nights sleeping under bridges, eating from garbage cans and seeking assistance.

But life has changed.

Muhammad is now in Syracuse, and for the past year — whenever he has had the resources — he has spent weekends handing out brown bag lunches and toiletries to the homeless through his organization, We Rise Above the Streets Recovery Outreach Inc. In winter, he also gave away gloves and hats.

Muhammad founded the nonprofit in June 2015, and he works there full time. 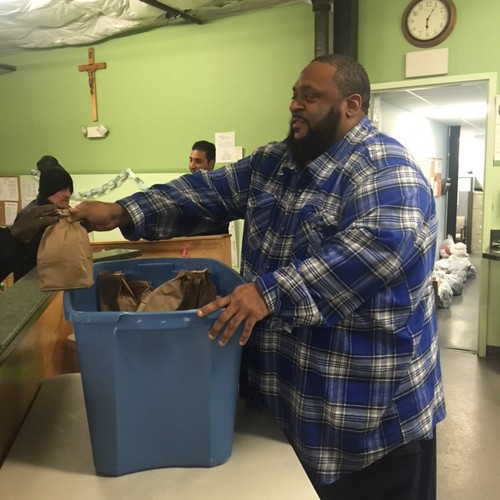 Alamin Muhammad, who was once homeless, works full-time running We Rise Above the Streets to help meet then needs of Syracuse’s homeless residents.

Originally born in Haiti, his parents moved him to Chicago when he was 5. Thinking back, he said when he looked out his window, he’d watch gang members out in the street and wished he were one of them.

His opportunity to join came during a chance meeting. When he went to buy clothes for school, he saw one of the gang members outside the store in conflict with a few guys, and the gang member looked toward him.

At that time Muhammad was 13. He said he left the store, joined in the fight to help the gang member and then ran. A few hours later, the Gangster Disciples, a criminal gang from the South Side of Chicago, were at his door, asking him to join.

According to the Chicago Tribune, this violent gang began in Chicago in the 1970s when the Black Disciples and the Supreme Gangsters merged. The gang is still active today. Within the past year, according to a Tribune story, 48 alleged members from nine states were indicted on charges involving coordinated criminal activity, including murder, drug trafficking, robbery, carjacking, extortion and fraud.

In the mid-1980s, Muhammad’s parents had recently divorced, so his mother was living on the North Side of Chicago, and his father on the South Side. He said after joining the gang, he quickly rose to a leadership position.

Many hardships followed, such as being shot, going in and out of prison and losing close friends. Muhammad decided he needed a change.

“I started getting into gang wars,” he recalled. “I saw people die in front of me. I’ve been to so many funerals. As I got older, I told myself that when I got out of prison in Chicago, something has to change. Because if I don’t leave Chicago, I might be dead.”

At the age of 29, Muhammad moved to Atlanta. But after a few months of working at a warehouse, he met a member of Gangster Disciples who was selling drugs. Muhammad began selling with this man, who turned out to be an informant. When the man told on Muhammad, he got less time. But Muhammad faced 10 years in prison.

Muhammad later saw this stint in prison as a blessing from God because during this sentence, he met the man who converted him to the religion of Islam.

“They agreed to give me one year served and five years probation,” Muhammad said. “I got on my knees. I can’t even believe that, because it was for a fact I was going to get 10 years because I got caught with nearly a half of key of cocaine. They had witnesses against me. That is nothing but God. Nobody else.”

TIME HOMELESS
From 2008, when Muhammad left prison, until 2012, he bounced from shelter to shelter in Atlanta, occasionally sleeping outside and under bridges. He said he was often hungry because with a drug felony, he could not qualify for food stamps in Georgia.

Yet he stood strong to make a change — even when he had an opportunity to return to the drug game.

“One day a former dealer rolled up to me at a bus stop and asked if I wanted a key of cocaine to get back on my feet,” said Muhammad, who refused the offer.

Eventually, after years of being homeless, Muhammad found his break volunteering at a Christian, socialist community called Open Door Community. While telling his story during detox meetings at St. Jude’s Recovery Center, staff members told him he would make an excellent addiction counselor.

“When he told his story, he wept,” said Eduard Loring, co-founder of Open Door Community in Atlanta, where he has run the center for 40 years. As Muhammad shared his history with drugs, gangs and violence, Loring said it became clear that he wanted to use that history to become a peacemaker and to heal others.

“He wrestled with what it meant for him to have this violent past,” Loring added, “but he came to see the redeeming value and how he could use that history to help others.” 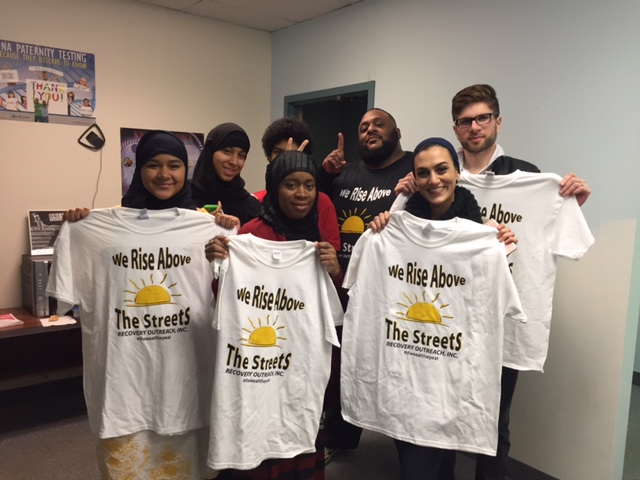 Volunteers stand with Alamin Muhammad to help distribute food and toiletry items to the homeless.

THE MOVE
After a few years, Muhammad met Monique, who now goes by the name Nasirah Muhammad, on Facebook. The couple decided to meet in person. Nasirah flew from Syracuse to Atlanta, heard Muhammad’s life story in an IHOP restaurant and married him the next day.

“This is where you really have to put your faith in action,” she said. “We believed we were supposed to take this journey together. I didn’t have any fear about it, because I really felt that Allah had brought us together.”

The two even spent their honeymoon serving the poor at the Open Door Community.

Because she was working for the Navy, she could not move, which meant after establishing all of those connections in Georgia, Muhammad would have to try to do the same in Syracuse.

Muhammad told Loring that his example of running the Open Door Community inspired him to launch his own outreach.

“The fulfillment I feel in hearing that,” Loring responded, “makes my efforts over the years feel so much more meaningful.”

It’s been just over a year since Muhammad launched his nonprofit in Syracuse.

His wife attests to his work ethic. “One of the things that he neglects to tell you is he has a mouthpiece. He can talk people into anything. He’s hard to forget because he’s very aggressive in a good way about what’s he doing.”

Hassan Rasiq, a Syracuse community member, met Muhammad at a local mosque where Rasiq is opening a food pantry. He said he was immediately impressed by Muhammad’s passion to help others.

“It was very cold out one day, and he was out giving coats and scarfs,” Rasiq said. “It really made me pay a little bit more attention because of that passion.”

Lisa Prentiss, another Syracuse community member who goes by the name Jannah, said she saw Muhammad’s organization on Facebook and decided to volunteer.

“I think it’s very important because there aren’t many organizations like that. I think that it gives the homeless a sense of belonging,” Prentiss said. “And it’s not junk meals. (The lunches are) food I myself would give my kids.”

Muhammad’s outreach is limited; he is able to make meals and provide other amenities only as money and supplies are donated.

“I know that he is struggling financially now, but that is the struggle many of us have when we start this work,” said Loring of the Open Door Community. “His mission is strong, and I think the focus on homeless African-American men is greatly needed.”