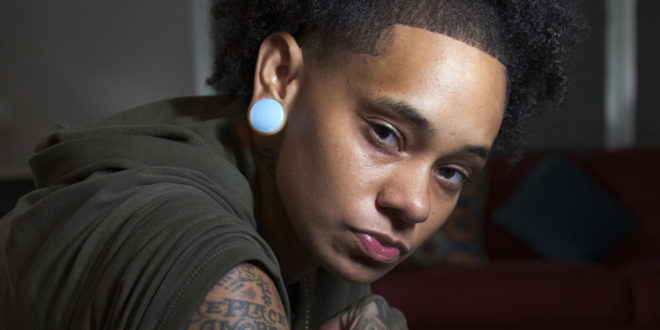 Shaunna L. Spivey-Spinner, who works regularly as a model, says she grew up without any role models. Through her outreach work, books and online docuseries, she hopes to encourage youth to be comfortable being themselves — without judgment. | Emily Elconin, Staff Photo

Finding Her Way Back

When Shaunna L. Spivey-Spinner’s second book comes out later this month, Syracuse is the last place she’ll be. Maybe she’ll hold a release party in Miami or will be overseas. What the local activist and model can guarantee is she will be nowhere near her hometown.

“The day my mom died is November 26,” said the 30-year-old author, recalling her mother’s unexpected death in 2014. “So I don’t like being around here … this place has bad energy on that day.”

The past two years, Spivey-Spinner was in Miami. This year, she might be in London for a release party for her book, “Finding My Way Back.”

And even though she won’t be here Nov. 26, locals can pick up a copy of her book downtown or order on her website. Unlike her first book, “Dear Self: Can I Talk to You,” this one is organized in chapters and intended to help guide others going through pain. Her first was a free flow of thoughts, directed back to herself. She says writing has been her stress reliever since elementary school — a way to pour out her pain and anger to process her emotions.

“Her first book went into her personal life to explain how she became who she is now,” said Brandon Baker, a friend and owner of Floral Essence, located at 401 S. Salina St. “A lot of people meet her and may not understand her, so the book helps others to know where she is coming from.”

Through a mutual friend, Baker learned about the passing of Spivey-Spinner’s mother and donated a large funeral wreath for her service because the story of the sudden loss touched him.

It wasn’t until later, when Spivey-Spinner stopped into his shop to buy flowers, that she learned of his generosity. The two became friends.

Baker will sell “Finding My Way Back” in his shop, just as he did the first book. He believes Spivey-Spinner’s story can help a lot of people. “Her books are inspirational,” he said.

Her second book tackles pain and how to heal.

“A lot of people think that because they’re hurt and going through pain that they can’t heal,” the author said. “But you have to walk through pain to actually know what you’re hurting from to come out of it.”

In “Finding My Way Back,” Spivey-Spinner opens up about several painful personal experiences. As a teen, she inflicted self-injury by burning herself. She was also bullied — ridiculed for dressing like a boy, called a dyke and even tazed by a fellow high school student. She also endured a six-year abusive relationship.

She does not shy away from the subjects of death and living with loss. In addition to the death of her mother, Spivey-Spinner’s father died when she was 7, and she has lost friends due to gun violence.

Lingering Loss
Three years ago, Spivey-Spinner was working as a model in Miami but returned to Syracuse when her mother was diagnosed with kidney cancer.

While her mother was in surgery to have her kidney removed, doctors found cirrhosis of the liver, which involves loss of liver cells and irreversible scarring of the organ. The family was told it was terminal.

“It was a big surprise,” she said, noting her father also died from cancer.

Her mother went into hospice care that October and passed away in November. Spivey-Spinner spent every day next to her mother’s side.

Now she wears her mother’s ashes around her neck, knowing her mother is still watching over her. “I think about her a lot,” she said, as she reached under her T-shirt to pull out a silver capsule affixed to a chain.

She shares a memory about their close relationship. In 2013, when Spivey-Spinner was featured in Curve magazine, the first phone call she made was to her mother, who immediately went to Barnes & Noble to buy every copy. “She’s not here in the physical any longer, but I still want to keep it (my progress) going and make an impact.”

Recently she launched a docuseries to address topics such as depression, bullying and suicide. She says she dealt with bullying all her life and now knows that just because people might be different doesn’t mean they should be disrespected. In the first docuseries episode, she revisits her mother’s old home. The second episode — to be released soon — will open at her father’s grave.

It was while on a modeling assignment in Los Angeles that she came up with the idea. “After meeting a producer, I realized I have a story to tell,” she said. He advised her to wear blinders to others’ negativity and follow her purpose. 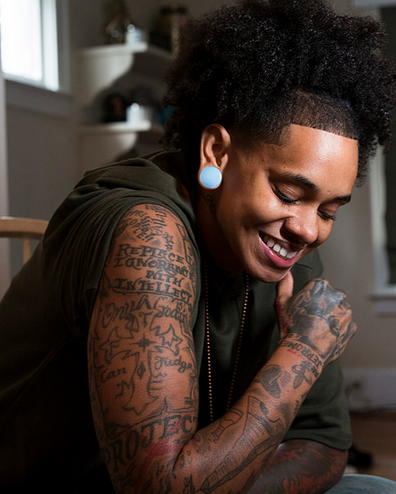 By flexing her arm, Spivey-Spinner shows off the first tattoo she got at age 13. | Emily Elconin, Staff Photo

She now works as an androgynous model, meaning one who has a combination of masculine and feminine physical characteristics. She is booked at least once a month and is regularly featured in Inked magazine, among others.

She got her first tattoo — a large cross on her upper arm — when she was 13, to cover up a burn she self-inflicted. In exchange for a bag of weed, the tattoo artist — in his own home — inked the cross into her arm accompanied by the words, “Only God can judge.”

“I’d light keys on fire and then singe my arms,” she said. Her tattoos, now covering 75 percent of her body, started as a way to hide the burns. While some teens who feel sad, distressed or overwhelmed by emotions act out by cutting, she spent years causing self-injury by burning her arms. Additional tattoos were added to cover those burns. Now she has more than 250 tattoos.

Because many kids don’t have an outlet, she hopes her docuseries can help. “If I had had a ‘me’ when I was growing up, I think the outcome would have been so different.”

Making Her Mark
Joining the police force has been a dream since childhood. Then the police raided her mother’s home, annihilating that vision before she turned 10.

“I never knew anything about hating cops or running from cops,” she said. “Then when they raided my mother’s house, I never saw anything like that. They trashed everything.”

Her older brother, who was living there, too, was selling drugs. Next, he was incarcerated for two years.

“After that, I hated the cops,” she said. “They took someone from me who I loved.”

At that young age, she says, she didn’t understand.

Then in 2010, her friend Tavorn Hunter was shot and killed while being robbed in the parking lot of the Middle East Market on State Street. 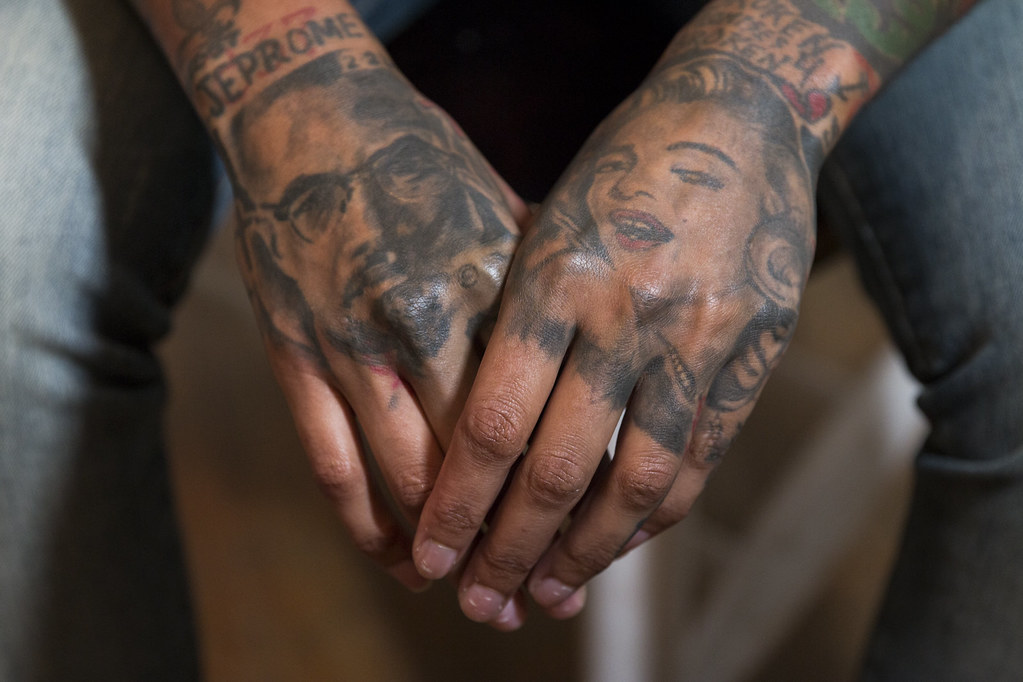 His death sparked Project X Nonviolence, a group Spivey-Spinner created to bridge the gap between residents and cops. After Hunter’s death, she organized her first protest on Facebook.

“When I started, I didn’t know what to do,” she said. “I had no strategy or grand plan. I didn’t even know my voice yet.”

She marched with the group, wearing all black, down Salina Street to City Hall, where anger emitted from each protester, even in the silence. After hours of standing, she and the others were invited upstairs to speak with Chief of Police Frank Fowler of the Syracuse Police Department.

That first protest taught her the importance of taking a stand.

“I learned that my presence has an impact,” she recalled. “Now the spotlight was on me, and I realized I needed to figure out what I wanted to say.”

She says that since then, the community’s outrage at local violence has grown.

“Honestly, there’s even more anger now,” she said, noting that much is directed at the police.

But her personal perspective on police has changed because she has seen the violence continue and has gotten to know some officers locally.

“I see where they are coming from and how hard it is for them to do their job when minorities won’t talk to them because of the stigma against police,” she said. She also believes that cops put a stigma on urban residents because they assume no one is willing to help.

“I’ve told them, in order for us to help you, you’ve got to help us,” she said. “That’s why I once again want to be a cop — because I think I can relate to the people out here.”

In May, she passed the civil service exam, starting her journey toward enrolling in the Syracuse Police Academy. She went from 116 to 145 pounds, much in muscle mass gained through daily gym visits. The dedicated workouts are in preparation for the police academy, which has a battery of physical requirements that candidates must meet, proving they are physically capable.

“I had never broke 120 pounds in my whole life,” she said with a laugh about the weight gain.