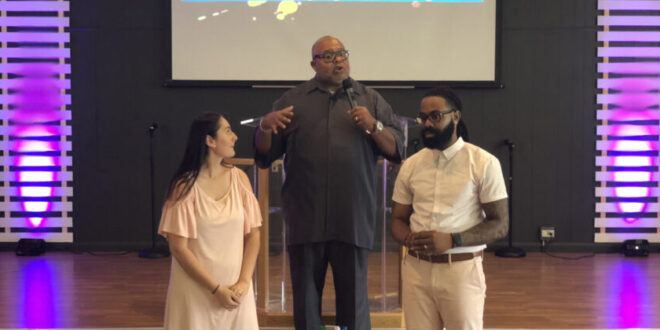 In using those words, he brings together his two passions: His faith in God, and his fight to destigmatize mental health issues in the Black community. Throughout his life, Neal-Eure has struggled with depression and suicidal thoughts, but it was something he never talked about with family, friends or pastors.

Then, when recovering from a motorcycle accident, doctors diagnosed him with a variety of mental illnesses, which affects more than 16% of Black people in the United States, according to Mental Health America.

Neal-Eure’s effort to understand and communicate his struggles mirrors a larger trend of Black churches slowly acknowledging a role open discussion of mental health and use of therapists.

Neal-Eure grew up heavily involved in the church. His parents held positions in ministry and encouraged their children to be active church goers. From giving Easter Sunday speeches to singing in the children’s choir, the church was a place of joy for his family, but Neal-Eure was silently struggling.

“I was never taught how to express my feelings when I was growing up,” Neal-Eure said. “It was almost like you weren’t allowed to have feelings, both as a person but also as a young Black man.” He says he was taught not to focus on mental health. Instead told, if a problem ever arose, to “pray about it and God would help fix it.”

This is the sentiment amongst many Black churches as well. But that’s starting to change at Neal-Eure’s family’s church and others.

Khira Fryar, a clinical social worker and marriage and family therapist, attends People’s A.M.E. Zion Church and runs its Hope Huddle program, an eight-week program that allows congregants space to discuss their personal matters outside of the church.

Fryar said that addressing mental health in the church is important because historically Black people “discount what mental health can do,” and that looking to God has been the main coping mechanism for the Black community.

“Black folks would tend to use God, scripture and faith to pray it away,” Fryar said. “If you’re struggling with something, God answers prayer — give it over, then he can handle it —which is true. He definitely can, but the scripture says faith without works is dead and we don’t understand that part.”

She added that seeking therapy along with having faith can help eliminate the unhealthy coping mechanisms.

“[Not seeking treatment] is impacting our behaviors. It’s impacting the way that we interact with one another, and it’s impacting our relationship with God,” Fryar said. “It’s important, specifically for Black people, to know and understand that it’s OK to have Jesus and a therapist too.”

That’s what ultimately worked for Neal-Eure. He enlisted in the U.S. Navy in 2009, becoming an aviation electronics technician. After six years, he ranked Petty Officer Second Class. He enjoyed the structure and routine-based lifestyle and had “every intention” to stay in the Navy for 30-plus years.

Then in 2015, a motorcycle accident and traumatic brain injury, eventually lead to a diagnosis of, what Neal-Eure called “a melting pot of mental health diagnoses.” Doctors told him he had chronic depression, severe anxiety, borderline personality disorder and Post Traumatic Stress Disorder. A few months later, he medically retired from the Navy.

Although he sought treatment while serving, he didn’t feel supported by his superiors, his cohorts or his family.

“I was distraught,” Neal-Eure said. “I was in tears because it was new for me too and my supervisors and other people in the Navy were telling me, ‘Oh nothing is wrong with you; it’s all in your head.’ Then to come home to the people who I thought were supposed to be there the most — for them not to even really acknowledge I was struggling — was very disheartening, and it set me back.”

“But I felt like I couldn’t blame them because, generationally, that’s just how we were brought up,” he added.

Twiggy Eure, Neal-Eure’s mother and the pastor and First Lady at The Promise Land Church, a nondenominational ministry she and her husband Erik Eure started in February of 2002. She said pastoring their own congregation was a calling.

Twiggy said her son’s diagnosis was hard for the family. They struggled to grasp her son’s battle with mental health, and not being able to physically see what was bothering him made it hard for her to understand.

“It was knowing that my son was struggling and not being quite sure how to help him or how to engage in the struggle, because some days you couldn’t tell,” she said. “Marquis is brilliant, smart, witty and handsome, and he obtained degrees throughout this time. He got married. He had children. It wasn’t physical and that made it hard to see.”

Having conversations around mental health with her son and learning from his experience helped their family see the importance of acknowledging mental illness, and they addressed it during service. Twiggy even started taking classes through National Alliance on Mental Illness (NAMI) and AccessCNY to learn about how to help others cope with mental health.

“We want our ministry to be a valuable resource for those struggling with mental health — not a place where you run from but a place that you run to,” Twiggy said. “And if that means partnering with mental health professionals and communities and inviting them into the church and going to where they are — because, you know, the church has left the building. Church is not what it used to be. It doesn’t look like it used to be.”

For example, over the course of the pandemic, people started attending church virtually.

“So, we must find creative ways to minister to all kinds of people,” she continued. “And if it means going to the organizations that service people with mental illness, then that’s what we have to do.”

She uses her connections as the director of diversity at Crouse Hospital to collaborate with healthcare professionals.

Neal-Eure copes through conversations about his mental health, performing music and helping others with their mental illness struggles.

“Even if I can’t do anything about it, sometimes just that conversation is enough and the offer to listen to them is monumental; it can be life changing, like a domino effect,” he said. “Once you start taking steps towards feeling better and doing better, if you continue down that path, the effects of it just get bigger and bigger.”

Darian Stevenson is a graduate student in the Magazine, News and Digital Journalism program at the S.I. Newhouse School of Public Communications at Syracuse University