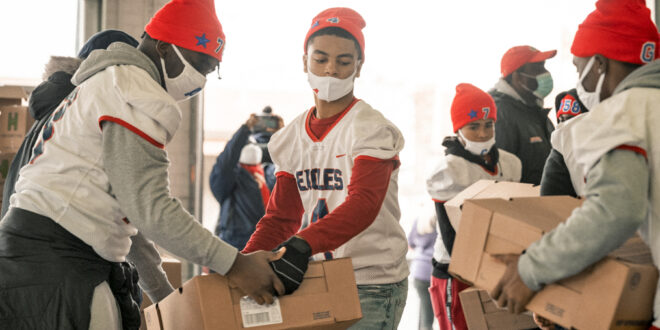 Members of the Institute of Technology Varsity Football Team came together to volunteer their time for the REACH Turkey Drive-Thru Giveaway held Nov. 20, organized by the Abundant Life Church. | Solon Quinn, The Stand

Instead of closing out their overall stellar season on a playoff loss, the Institute of Technology at Syracuse Central (ITC) varsity football team decided to unite one last time for a good cause.

Co-captain Isaiah Goodrich, who led the section in interceptions this year, knew the season was over after the team’s 49-20 loss Nov. 5 to New Hartford. But he wanted to ensure his “brothers” had an opportunity to come together for one last meaningful event. Goodrich, who has been volunteering with his church and family since elementary school, expressed the interest in having his teammates join the church’s planned REACH Turkey Drive-Thru giveaway Nov. 20 at The Vision Center.

Levens is Goodrich’s godfather and heard how far the team had come and how hard they worked this year.

After starting a 0-3 season, the Eagles persevered to secure five straight wins, becoming the first team in ITC’s history to win a playoff game.

But their season ended during the Class B sectional finals. It should be noted, ITC’s 20 points were the most allowed all season by New Hartford, a team that up to that point had had an undefeated season.

“Levens wanted to inspire the guys and talk to them before the big game,” Head Coach Cedric Stevens said. “They were definitely surprised and excited. They listened closely to everything he said.”

The former NFL player, whose likeness has even graced the cover of “Madden,” was a huge surprise for the team. He told the players to “go and leave it all on the field.” He advised them to always remember those in the room right now are “their brothers” and no matter the outcome of a game, that bond will never be lost.

The Eagles took heed to Levens’ words and the continuous encouragement, guidance and inspiration of Stevens, who never lost hope in his players.

“Besides the loss, we had an amazing season,” Tyshawn Taylor said.

Together, Goodrich, his mother, Akua, and Stevens helped him enlist players to support his church’s annual giveaway leading up to Thanksgiving. Their call drew more than half of the varsity team.

“When we came off the field to volunteer last Saturday, it felt great helping out people less fortunate then us, especially since it was with my brothers,” said Miguel Cruz, the team’s linebacker.

Goodrich wants all who may too easily stereotype young men of color to see this effort as a promising assurance to rethink these perceptions.

“Being with my brothers shows the world who we really are,” Goodrich said. “And I really hope that because they saw us volunteering, wearing our jerseys and skullies and having fun with the other volunteers and smiling at people in the line … I hope that other student athletes will want to join us or go somewhere else in this community and give back.”

Ashley Kang is the director of The Stand